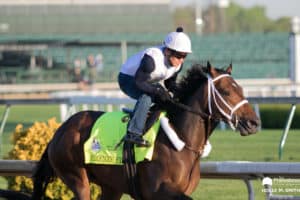 Mr. Amore Stable’s Firenze Fire returns to his preferred oval of Big Sandy as he looks to defend his title in Saturday’s Grade 2, $250,000 Vosburgh going six furlongs over the main track for 3-year-olds and upward, at Belmont Park.

The Vosburgh is a “Win And You’re In” qualifier and offers the winner an automatic entry into the Grade 1 Breeders’ Cup Sprint on November 6 at Del Mar. The prestigious sprint race honors Walter S. Vosburgh, the official handicapper for the Jockey Club and New York racetracks from 1894-1934.

A 14-time winner over seven different racetracks, Firenze Fire has claimed most of his success at Belmont which accounts for seven total victories.

While Firenze Fire has developed a reputation for his affinity for Belmont Park, he garnered a new image last out in the Grade 1 Forego on August 28 at Saratoga where he attempted to savage Yaupon in a memorable stretch duel, ultimately coming up a head shy of victory.

“It’s amazing. I must have watched it a hundred times,” said owner Ron Lombardi. “It’s amazing how he stayed with Yaupon while trying to bite him through at least four strides. Another two strides he would have won it, not that he would have stayed up. It’s made him a rockstar. It may have cost me a few dollars, but he’s definitely getting a lot of attention.”

A 6-year-old son of Poseidon’s Warrior, Firenze Fire has won a graded stakes race at Belmont Park in four of the last five years, including a win in the 2017 Champagne which is his only Grade 1 victory to date.

“He’s won at seven tracks, but he’s won the most at Belmont, and loves that surface,” Lombardi said. “He’s just such a solid horse and he showed his athleticism last time out in the Forego.

Firenze Fire scored back-to-back runnings of the Grade 2 True North in the past two summers. He was a close second to two-time Vosburgh winner Imperial Hint in the 2019 Vosburgh.

“It could’ve been three times, but that’s part of the game,” said Lombardi.

Lombardi has not ruled out a 7-year-old campaign for Firenze Fire.

“He’s still at the top of his game. I’ve had offers, but I may run him next year,” Lombardi said. “I would love to do that. I think it would be so cool. The fans love him. He’s a fan favorite and he elevated that with his antics last time. It would be great to have him run back, so we’ll see.”

Irad Ortiz, Jr., who has engineered winning trips in eight of Firenze Fire’s 14 victories, will return to the irons from post 4.

Hall of Fame trainer Todd Pletcher will target his fourth Vosburgh coup with Spendthrift Farm homebred Following Sea. The 3-year-old son of Runhappy has never finished off the board in five starts, which include a pair of Grade 1 placings. After being elevated to second via disqualification in the nine-furlong Haskell Invitational in July at Monmouth Park, he finished a distant third to Jackie’s Warrior and stable mate Life Is Good in the seven-furlong H. Allen Jerkens in August at Saratoga.

“He’s talented and I thought he ran pretty well in the Allen Jerkens. He reacted to the dirt in his face for a while, but he finished up decently,” Pletcher said. “The Haskell may have been a little too far a little too soon, but he’s held good company and had a good win over the track here over the summer.”

Pletcher said the distance should be right up his alley.

“He broke his maiden going six and won the allowance here going six-and-a-half, so hopefully it suits him,” Pletcher said.

Hall of Fame trainer Bill Mott will saddle Baby Yoda, who last out was victorious against older winners going 6 ½ furlongs on September 4 at Saratoga. The third lifetime victory for the 3-year-old son of Prospective produced a 114 Beyer Speed Figure, which is the co-highest figure to be recorded by a horse this year.

Previously trained in Maryland by Charles Frock, Baby Yoda won at first asking for a $10,000 tag on May 30 two starts ahead of winning his first outing for Mott in a July 17 starter allowance at Saratoga.

Baby Yoda is owned by Wachtel Stable, Pantofel Stable and Jerold Zaro and will leave from post 3 under Luis Saez.

Rabbah Bloodstock’s Good Effort will add blinkers for his first start in North America, entering off an allowance win over the all-weather surface at Deauville.

Trained by Ismail Mohammed, the 6-year-old son of Shamardal was a three-time sprint stakes winner over the synthetic surface at Longfield Park in England last year. His best effort on dirt took place in the Group 3 Mahab Al Shimaal in March at Meydan Race Course when second beaten a neck.

Good Effort will be ridden by Wayne Lordan from post 2.

Completing the field is Rockingham Ranch and David Bersen’s Jalen Journey, a winner via disqualification last out in the Grade 3 Frank J. DeFrancis Memorial Dash at Laurel Park for Hall of Fame trainer Steve Asmussen.

Jalen Journey, a 6-year-old ridgling son of With Distinction, boasts a consistent 16-8-2-1 record with just over a half-million dollars in lifetime earnings.

Breaking from post 1, Jalen Journey will be piloted by Jose Lezcano.