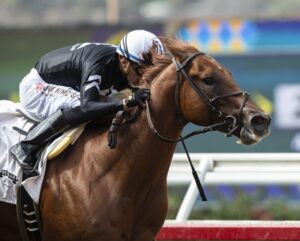 An impressive first-out winner on dirt, Richard Mandella’s Forbidden Kingdom merits top billing on grass in Friday’s $100,000 Speakeasy Stakes at Santa Anita which has attracted a field of seven juveniles, including three fillies.  To be contested at five furlongs on turf, the Speakeasy is a Breeders’ Cup “Win & You’re In” Challenge Race qualifier to the $1 million Breeders’ Cup Juvenile Turf Sprint Nov. 5 at Del Mar.

A chestnut colt by American Pharoah, out of the Five Star Day mare Just Louise, Forbidden Kingdom was purchased for $300,000 out of the 2020 Fasig-Tipton Selected Yearlings Showcase Sale and is owned by MyRacehorse and Spendthrift Farm, LLC.  With a solid 79 Beyer Speed Figure in-hand, Forbidden Kingdom will hope to act on turf as well with Juan Hernandez back in the saddle.

A Chicago mainstay, jockey E.T. Baird will be back aboard the speedy One Timer, who is trained by Larry Rivelli and will be making his Southern California debut.  A Kentucky-bred gelding by Trappe Shot, One Timer comes off a pair of impressive sprint wins over synthetic surfaces.  A first-out 12 ½ length open maiden winner going five furlongs at Arlington Park June 26, One Timer, who is owned by Richard Raven and Patricia’s Hope, LLC, then sped to a 3 ¾ length score in an ungraded stakes going 5 ½ furlongs at Woodbine July 31.

With five Arlington Park works over synthetic since winning in Canada, One Timer, who has registered Beyer Speed figs of 80 in both of his starts, can be expected to handle turf and if so, rates a big chance in a race that could set him up for Breeders’ Cup stardom.

Owner Gary Barber’s Time to Party, a chestnut gelding by Kantharos, comes off a 1 ½ length maiden win going five furlongs on turf as the 3-5 favorite on Sept. 2 and figures to attract ample pari-mutuel attention.  Trained by Peter Miller, Time to Party has shown plenty of speed in two starts, his first a narrow second place finish under the same conditions Aug. 1.

With Flavien Prat back aboard, Time to Party, who was purchased for a modest $72,000 at the 2020 Ocala Breeders’ Sale Company Winter Mixed Sale, is based at San Luis Rey Downs and will hope to step forward for his high percentage connections on Friday.

Of the three fillies entered, Wesley Ward’s turf stakes winning Miss Alacrity rates the best chance in what will be her third start.  A New York-bred by Munnings, she was a 10 length first-out winner versus statebreds going five furlongs on dirt at Belmont Park May 20 and came back at even money to drill open fillies going five furlongs on turf in an ungraded stakes Aug. 1 at Monmouth Park.  She’ll be ridden by John Velazquez, who was aboard for the maiden win.

The remaining fillies are the Bob Hess, Jr. conditioned Blame It On Rose, a maiden $32,000 claiming winner two starts back who then took a first condition allowance going six furlongs on dirt Aug. 28 at Del Mar and Rock the Belles, a $2,000 supplemental entrant.  Trained by Luis Mendez, Rock the Belles was an impressive first-out maiden $150,000 claiming winner versus fillies Aug. 14 and was then well beaten in the Grade I Del Mar Debutante Sept. 5.

THE $100,000 SPEAKEASY STAKES WITH JOCKEYS & WEIGHTS IN POST POSITION ORDER

The Speakeasy is one of four stakes on a nine-race program Friday, opening day of Santa Anita’s 16-day Autumn Meet which concludes on Oct. 31.  For additional information, please visitsantaanita.com or call (626) 574-RACE.