G1 Alcibiades May Launch Next Great 2YO Filly Into Breeders’ Cup

G1 Alcibiades May Launch Next Great 2YO Filly Into Breeders’ Cup 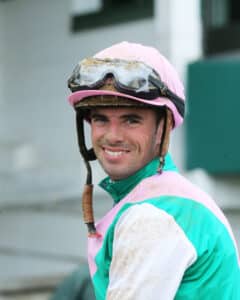 A field of a dozen 2-year-old fillies, headed by Sorority winner Runup, was entered Tuesday for the 70th running of the $400,000 Darley Alcibiades (G1) that serves as the centerpiece of Friday’s opening program of the Fall Meet.

The 1 1/16-mile main track test is a Breeders’ Cup Challenge race with the winner getting a fees-paid berth into the Breeders’ Cup Juvenile Fillies (G1) to be held Nov. 5 at Del Mar.

The Darley Alcibiades will go as the ninth race on Friday’s 10-race program with a 5:45 p.m. ET post time. First post is 1 p.m.

Owned and bred by James McIngvale, Runup has won both of her starts on dirt highlighted by the 3-length victory at Monmouth in the 1-mile Sorority in her first two-turn test. Trained by Laura Wohlers, Runup will be ridden by Joseph Ramos and leave from post position 12.

Three runners coming out of Grade 1 tests are in the field: Sequist and Dream Lith, the fourth- and fifth-place finishers in the 7-furlong Spinaway Sept. 5 at Saratoga, and Myfavoritedaughter, fourth in the 7-furlong TVG Del Mar Debutante Sept. 5.

Owned by West Point Thoroughbreds, Lori Gervais, Charles Pigg, Tom Andres and Karen Kraft and trained by Dallas Stewart, Sequist won on debut at Colonial Downs before going to the Spinaway. Junior Alvarado has the mount from post position three.

Average Joe Racing Stables’ Myfavoritedaughter took three tries to notch her first victory, which came by 25 lengths over a sloppy track going 7 furlongs at Gulfstream Park prior to going to Del Mar. Trained by Jeff Engler, Myfavoritedaughter will be ridden by Corey Lanerie out of post position five.