G1 Alcibiades Stakes Preview: Thoughtfully Is Worth a Thought

G1 Alcibiades Stakes Preview: Thoughtfully Is Worth a Thought 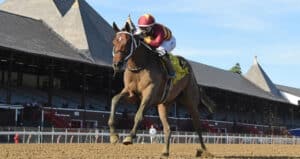 Trained by Steve Asmussen, Thoughtfully debuted June 11 at Churchill Downs and romped to an 8¾-length score going 5 ½ furlongs. A month later at Saratoga, she scored a 5-length victory in the Adirondack (G2) going 6½ furlongs.

Ricardo Santana Jr., who has been aboard for both victories, has the call Friday and will break from post position one.

Likely to vie for favoritism with Thoughtfully is Phoenix Thoroughbred’s Crazy Beautiful.

Trained by four-time Darley Alcibiades winner Kenny McPeek, Crazy Beautiful won the Aug. 9 Runhappy Debutante at Ellis Park before running a troubled second as the favorite in the Sept. 3 Pocahontas (G3) at Churchill Downs. Brian Hernandez Jr. has the mount and will break from post position four.

McPeek will have two other starters in the race: Susan Moulton’s Oliviaofthedesert and Harold Lerner, Magdalena Racing and Nehoc Stables’ Simply Ravishing.

Oliviaofthedesert has three starts won her lone race on dirt by 5½ lengths at Ellis in August. She will be ridden Friday by Corey Lanerie and break from post position three. Simply Ravishing is perfect in two starts and enters Friday’s race off a daylight victory in the off-the-turf P.G. Johnson at Saratoga Sept. 3. Luis Saez has the mount and will exit post position seven.