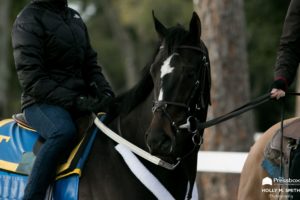 An accomplished field of eight horses will seek the calendar year’s final opportunity for Grade 1 glory on the NYRA circuit in the 32nd running of the $750,000 Cigar Mile presented by NYRA Bets at Aqueduct Racetrack.

Since its inception in 1988, a total of 11 sophomores have bested their elders in the prestigious race, which was run as the NYRA Mile prior to 1997. This year, two 3-year-olds will vie to add to that number, including the accomplished pair of Americanrevolution and Following Sea from the stable of Hall of Famer Todd Pletcher – a four-time Cigar Mile winner.

Owned by WinStar Farm and CHC Inc. and bred in New York by Fred W. Hertrich III and John D. Fielding, Americanrevolution makes his return to graded company after finishing third two starts back in the Grade 1 Pennsylvania Derby on September 25 at Parx, which was won by Hot Rod Charlie over Midnight Bourbon.

Americanrevolution, one of two sons of leading third-crop sire Constitution in the Cigar Mile, has garnered three stakes victories against his Empire State-bred counterparts by a combined 24 lengths.

After a 7 ¼-length romp in the New York Derby on July 19 at Finger Lakes, he parlayed that impressive effort into the Albany on August 27 at Saratoga, which he won by five lengths. Following the next-out Pennsylvania Derby, Americanrevolution garnered a field-best 108 Beyer Speed Figure when besting older New York-bred company by 11 3/4-lengths in the nine-furlong Empire Classic on October 30 over a sloppy and sealed Belmont Park main track.

“He’s been very consistent, and he’s accomplished a lot in a short period of time,” Pletcher said. “He’s made a lot of progress. It’s another class test and he’s dropping back in distance which is always a challenge, but he deserves a chance.”

Pletcher, who also conditioned Constitution, expressed pride in seeing another one of his barn’s alumna go on to have a successful stud career.

“He’s on his way to becoming one of the top stallions in the country. He gets a little of everything – sprinters, routers, dirt, turf, fillies, colts,” Pletcher said.

Spendthrift Farm homebred Following Sea was a troubled third in the last out Grade 1 Breeders’ Cup Sprint and seeks his second graded stakes triumph in Saturday’s engagement. The son of second crop sire Runhappy was victorious in wire-to-wire fashion against multiple graded stakes winner Firenze Fire in the six-furlong Grade 2 Vosburgh on October 9 at Belmont.

Following Sea, who has never finished off the board in seven lifetime starts, was a distant third in his lone pair of starts past 6 ½ furlongs when completing the trifecta in the Grade 1 Haskell Invitational at nine furlongs and the Grade 1 H. Allen Jerkens Memorial going seven furlongs.

He broke his maiden by 5 ¾ lengths at second asking in a six-furlong maiden special weight in April at Oaklawn Park ahead of an open-length score against winners in a first-level Belmont allowance two months later.

“He still has to prove himself going further,” Pletcher said. “He was impressive in the Vosburgh and his allowance race and in his maiden win sprinting. He’s always given us the impression of a horse that will run further, and he’s certainly built like one that would. I haven’t had too many Runhappy [progeny], but with him being a sprint champion I think some people expected him to come out sooner than they really wanted to. I wouldn’t be surprised that as they mature a little bit, they will continue to improve.”

Hall of Famer John Velazquez will ride Following Sea from post 1 as he and Pletcher seek their first collaborative Cigar Mile coup since joining forces 20 years ago with Left Bank.

While Americanrevolution and Following Sea are seeking breakthrough victories in the Cigar Mile, the one-turn mile will be a swan song for multiple graded stakes-winner Independence Hall who returns to Aqueduct for the first time since capturing the 2020 Jerome.

Trained by Pletcher’s former assistant Michael McCarthy, Independence Hall arrives off a 7 ¼-length runaway victory at 1 1/8 miles in the Grade 2 Fayette on October 30 over a sloppy and sealed Keeneland main track, where he registered a career-best 105 Beyer.

The son of Constitution garnered plenty of warranted attention in only his second career start, when capturing the Grade 3 Nashua in November 2019 at Aqueduct by 12 ¾ lengths for former trainer Mike Trombetta.

“His race in the Fayette was very good. He loved the slop,” McCarthy said. “Now he’s going back to Aqueduct, the site of one of his most impressive victories, so we feel good about it. I’m excited about the turnback in distance for him.”

McCarthy said Independence Hall, who was fractious in the paddock prior to his Jerome victory, does not display such mannerisms around the barn.

“He’s a very talented horse,” McCarthy said. “A complete gentleman around the barn so a little atypical the way he acts in the paddock compared to around the barn. He’s very classy. I don’t think there’s a better looking horse on the grounds. He’s very beautiful.”

Trainer Richard Baltas will ship Ginobili cross-country, attempting to give the son of Munnings a second graded stakes triumph.

He followed with a score in the Grade 2 Pat O’ Brien one month later at Del Mar, which offered a “Win and You’re In” berth to the Breeders’ Cup Dirt Mile, where Ginobili finished second to Life Is Good on November 6 at Del Mar.

“He ran two good races at Del Mar, and I wanted to give him a little time between then and the Breeders’ Cup,” Baltas said of the spacing between starts. “We were already in the Breeders’ Cup through ‘Win and You’re In’. He ran well against maybe the best horse in the country.”

Baltas added blinkers to Ginobili for his impressive victory three starts back, which has paid back dividends for the 4-year-old gelding.

“He was the type of horse where if he’s not up in the race or had horses in front or beside him, he really didn’t want to go,” Baltas said. “When he broke his maiden he was on the lead. In other races, when he was behind horses, he got disinterested. It’s hard to say. So, I worked him blinkers and that’s when he had that crazy race at Del Mar [on July 17] and he came back and won the Pat O’Brien.”

As the lone millionaire in the race, William S. Farish’s Code of Honor boasts a field-best $2,951,320 in lifetime earnings and seeks a third Grade 1 victory for Hall of Fame trainer Shug McGaughey.

During his sophomore campaign, the now 5-year-old son of Noble Mission, won the Grade 1 Runhappy Travers at Saratoga before being elevated to victory against older horses in the Grade 1 Jockey Club Gold Cup at Belmont.

This year, he captured the Grade 3 Phillip H. Iselin in August at Monmouth Park. He enters from a last out second to Independence Hall in the Fayette.

Although scheduled to join the 2022 stallion roster at Farish’s Lanes’ End Farm in Midway, Kentucky, the Cigar Mile might not be a final career start for Code of Honor.

“He’s doing very well,” said McGaughey. “He’s obviously been very good to me over the years. He’ll go to stud next year, but whether this will be his final start, we’re not sure yet.”

Bill Mott will attempt a fourth victory in a race named after one of the greatest horses he has ever trained when the Hall of Famer saddles 3-year-old Olympiad.

“We’ve always liked him,” Mott said. “We thought last year he was one of the best two colts we had. It’s a big step up, no question.”

The Cigar Mile honors Allen Paulson’s all-time great, who from 1994-96 equaled 1948 Triple Crown winner Citation’s modern-day North American record of 16 consecutive victories, a record which has since been broken twice. Cigar’s unprecedented win streak included victories in the Breeder’s Cup Classic, Donn Handicap, Hollywood Gold Cup, Woodward, Jockey Club Gold Cup, Oaklawn Handicap, and Pimlico Special. Trained by Mott and ridden primarily by Hall of Fame jockey Jerry Bailey, Cigar retired with nearly $10 million in lifetime earnings and resided at the Kentucky Horse Park upon his retirement until passing in 2014. He was inducted into the National Museum of Racing and Hall of Fame in 2002.