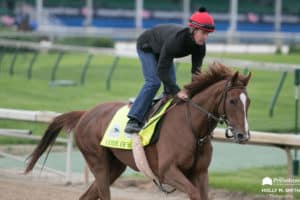 Nominations to the Grade I, $750,000 Clark presented by Norton Healthcare closed Saturday. The full list of nominees will be released in the upcoming days but here is a look at some of the known likely runners for the 147th renewal of the 1 1/8-mile race, according to Churchill Downs assistant racing secretary and stakes coordinator Dan Bork.

Entries to the Nov. 26 Clark will close Sunday, Nov. 21. The Clark is one of six stakes events on closing week of the 132nd Fall Meet. One day prior to the Clark, on Thanksgiving, Juddmonte’s multiple graded stakes winner Bonny South is slated to battle with defending champion Envoutantein the $500,000 Falls City (GII). On Saturday, Nov. 27, the $400,000 Kentucky Jockey Club (GII) and $400,000 Golden Rod (GII) will award points to the Top 4 finishers on a 10-4-2-1 scale for the Road to the Kentucky Derby and Road to the Kentucky Oaks. The “Stars of Tomorrow II” program will also feature the inaugural runnings of the $200,000 Lively Shively and $200,000 Fern Creek.

DREAM SUPREME QUEEN BELL’S THE ONE HEADS FOR 45-DAY ‘VACATION’ BEFORE 6-YEAR-OLD CAMPAIGN – Lothenbach Stables’ Bell’s the One, the one-length winner of Saturday’s $300,000 Dream Supreme, is slated to have 45 days off before beginning training toward a 6-year-old campaign, according to trainer Neil Pessin.

“She’s a special mare to all of us and it’s great that she’ll be back next year,” Pessin said. “We’ll give her a vacation and then target the (Breeders’ Cup) Filly & Mare Sprint at Keeneland.”

“I’d say this was a pretty good birthday present,” Lanerie said. “It was great that the owners were here to celebrate as well.”

Bell’s the One was originally set to duel with rival Sconsin for the sixth time but the 4-year-old filly was scratched by trainer Greg Foley.

“(Sconsin) is doing fine but she wasn’t acting like herself to run against these type of horses,” Foley said. “Hopefully next year we’ll get to run against Bell’s the One again.”

Bell’s the One earned a 94 Brisnet Speed Rating for her victory Saturday.

CHILUKKI STAKES PROBABLES – Saturday’s featured race is the 36th running of the $300,000 Chilukki (Grade III) at one mile for fillies and mares 3-years-old and up. Here is the likely field,  according to Churchill Downs’ assistant racing secretary and stakes coordinator Dan Bork: Matera(trainer Brad Cox), Pass the Plate (Paul McGee), Princess Causeway (Ian Wilkes) and She Can’t Sing (Chris Block).

BENEFIT FOR THE BACKSIDE DAY AT THE RACES IS FRIDAY – The Backside Learning Center, an organization dedicated to building community and enriching the lives of equine workers and families at Churchill Downs, will hold its largest annual fundraiser, “Benefit for the Backside: A Day at the Races” on Friday at Churchill Downs.

The event is sold out, but the Backside Learning Center is hosting an online silent auction with many unique horseracing and other hard to find items and experiences, including a year-long membership to Louisville Thoroughbred Society, a private tour of Spendthrift Farm, AirBnB experiences, top-shelf bourbon packages and much more. In addition, the Backside Learning Center will conduct a “Thurby Suite for 40” raffle drawing including food and drink (a $9,000 value.)

The Backside Learning Center plans to host several Facebook Lives at the event to present their transformative work with equine workers and families and will recognize participating families as well as a volunteer who has demonstrated an extraordinary level of dedication to develop young leaders.

Interested parties can join the online auction, purchase a raffle ticket for a “Thurby Suite for 40” or donate by visiting www.BenefitForTheBackside.com.

DOWN THE STRETCH – Racing continued Sunday at Churchill Downs for a nine-race program that began at 1 p.m. There was an $83,905 jackpot carryover in the 20-cent Derby City 6 that spanned Races 4-9. … Following dark days on Monday and Tuesday, racing will continue Wednesday-Sunday with first posts of 1 p.m. … The 2021 season finale of “Inside Churchill Downs” will air Friday at 6 p.m. on ESPN 680/105.7. The show is streamed live online at www.espnlouisville.com. … For more information about the Fall Meet, visit www.churchilldowns.com.