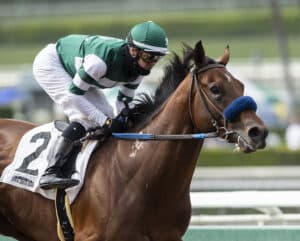 A heartbreak nose loser of the Grade I Breeders’ Cup Sprint at Del Mar Nov. 6, Mark Glatt’s Dr. Schivel, who had been unbeaten in three starts this year, will try to make his case for Eclipse Sprinter of the year honors as he seeks his third career Grade I victory.  Throw in Bob Baffert’s Triple Tap, who like Flightline, is unbeaten in two starts and making his first stakes appearance, and Runhappy Malibu appears to have the makings of an instant classic.

A bay colt by Tapit out of the Indian Charlie mare Feathered, Flightline earned a 105 Beyer Speed Figure in his six furlong debut here on April 24, a race he won by 13 ¼ lengths.  Idle until Sept. 5, Sadler turned him loose in a six furlong allowance at Del Mar, a race he won by 12 ¾ lengths and in which he earned an astronomical 114 Beyer.

In what is no doubt a resounding endorsement, Flavien Prat, Santa Anita’s Winter/Spring Riding champ three out of the past five years, has opted to stick with Flightline over both Dr. Schivel and Triple Tap.  Owned by Hronis Racing, LLC, West Point Thoroughbreds, Summer Wind Equine, LLC, Siena Racing, LLC and Woodford Racing, LLC, Flightline, who was bred in Kentucky by Summer Wind Equine and fetched $1 million as a Fasig-Tipton New York Saratoga Select Yearling in 2019, will no doubt be the focus of the racing world on Sunday.

A winner of the Grade I Del Mar Futurity in his fourth start at age two, Dr. Schivel entered the Breeders’ Cup Sprint on Nov. 6 on the heels of a pair of graded stakes wins going six furlongs–the Grade I Bing Crosby on July 31 and the Grade II Santa Anita Sprint Championship on Oct. 2, a race he dominated by 3 ¼ lengths.

Off at 4-1 in the Breeders’ Cup Sprint with Prat aboard, Dr. Schivel got a perfect stalking trip from his outside post, took command a furlong out and in a desperate finish, was nailed on the money by longshot Aloha West, only to be back in front on the gallop-out past the wire.  With Prat, who had been a perfect four for four on Dr. Schivel, opting to ride Flightline, Juan Hernandez who guided the son of Violence to a 5 ¾ length maiden win in his third career start on Aug. 8, 2020, has the call.

A winner of a record four Malibu Stakes, Bob Baffert’s Triple Tap will no doubt command considerable respect and be ridden for the first time by John Velazquez, who has committed to ride full-time at Santa Anita this winter.  Owned by his breeders, Summer Wind Equine, Triple Tap, like Flightline, was an impressive first-out maiden winner who was then idle for several months prior to making his second start.

A 4 ¼ length maiden winner going seven furlongs at 1-5 on March 13, Triple Tap came back running on Nov. 5, taking a six furlong allowance by 2 ¼ lengths while earning a 97 Beyer as the 9-5 favorite.  By Tapit out of the Yankee Gentleman mare Littleprincessemma, Triple Tap appears primed for a top effort.

THE RUNHAPPY MALIBU WITH JOCKEYS & WEIGHTS IN POST POSITION ORDER

The Runhappy Malibu, to be run for the 75th time, is one of six graded stakes on Opening Day.  Special early first post time is at 11 a.m., with admission gates opening at 9 a.m.