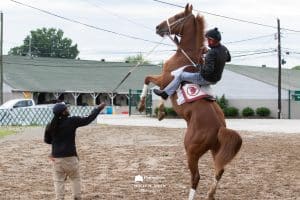 Saturday’s G2, $500,000 Lukas Classic is shaping up to be one of the more competitive races in North America this year. Grade I winners Happy Saver and Hot Rod Charlie are among the nominated talented older horses that are scheduled to face 80-1 upset Kentucky Derby winner Rich Strike in the ninth renewal of the 1 1/8-mile race, which comes five weeks in advance of the Breeders’ Cup World Championships at Keeneland.

Kentucky Derby winner Rich Strike, owned by RED TR-Racing and trained by Eric Reed, finished sixth in the $1.5 million Belmont Stakes (GI) and fourth in the $1.25 million Travers (GI) but returns to Churchill Downs where he is a perfect 2-for-2, including his unforgettable three-quarter of a length triumph over divisional leader Epicenter on the first Saturday in May.

The 3-year-old colt by Keen Ice would become the first Derby winner to return to Churchill Downs since Mine That Bird finished eighth in the 2010 Firecracker (GII) at age 4.

The Lukas Classic is the co-headliner on Saturday’s card along with the 30th running of the $300,000 Ack Ack (GIII), which is a “Win and You’re In” event for the Breeders’ Cup Dirt Mile (GI). Here are the likely Ack Ack entrants to the Ack Ack, according to Bork: Injunction (Carlo Vaccarezza); Senor Buscador (Todd Fincher); Speaker’s Corner (Bill Mott); Three Technique (Jason Cook); and Untreated (Todd Pletcher).

Echo Zulu was one of five stakes wins Saturday for her stallion Gun Runner, three of which occurred at Churchill Downs. His other stakes victories beneath the Twin Spires came from Gunite in the $275,000 Harrods Creek and Sixtythreecaliber in the $160,000 Seneca Overnight Stakes.

Gunite received a 100 Brisnet Speed Rating for his three-length win over Conagher in the Harrods Creek while Sixtythreecaliber earned a career-best 93 for her 11-1 upset victory.

In the final stakes event Saturday, Home Brew held off the late charge of Creative Minister and War Campaign to win by a scant nose in the $275,000 Bourbon Trail Stakes. He earned a 97 Brisnet Speed Rating.

DOWN THE STRETCH – Racing continued Sunday with a first post of 12:45 p.m. The 10-race card featured a $9,533 carryover in the 20-cent Derby City 6 jackpot and a $8,677 carryover in the $1 Super Hi 5. … The European Road to the Kentucky Derby began Saturday with victories by Crypto Force in the Beresford Stakes at the Curragh and The Foxes in the Royal Lodge at Newmarket. Both races were held at one mile over the turf and awarded the winners with 10 points. The European Road to the Kentucky Derby will continue Saturday with the Qatar Prix Jean-Luc Lagarere at France’s Longchamp. … Through eight days of the September Meet the average win pari-mutuel was a stout $16.07. Last year’s September Meet had an average win payoff of $11.59. … After dark days on Monday and Tuesday, racing will resume Wednesday for closing week of the September Meet with a nine-race card that begins at 12:45 p.m. ET. … For more information about the Churchill Downs September Meet, visit www.churchilldowns.com.