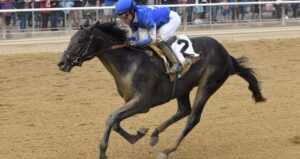 Jeff Drown’s impressive maiden winner Zandon will attempt to rise to the occasion in Saturday’s 106th running of the Grade 2, $250,000 Remsen for juveniles going nine furlongs at Aqueduct Racetrack.

Trained by Chad Brown, who won the 2014 Remsen with Leave the Light On, Zandon was a 1 ½-length winner of his six-furlong debut on October 9 at Belmont Park.

Despite hitting the gate at the break, the son of second crop sire Upstart recovered and sat two lengths off the pace while saving ground in fourth down the backstretch. Joel Rosario angled Zandon a couple of paths wide down the lane and he garnered command in the final furlong to register an 80 Beyer Speed Figure on debut.

“He ran one time going six furlongs and he won, but I’ve always thought of him as a pure route horse,” Brown said. “The fact that he was able to go three-quarters, I was quite impressed. I thought he would’ve been a late-running horse that would have needed a start, but he won. I was quite impressed by that because I don’t think that’s what he wants to do at all.”

Bred in Kentucky by Brereton Jones, Zandon is out of the unraced Creative Cause mare Memories Prevail – a half-sister to stakes-winners Cariba and Cairo Memories. He was bought for $170,000 at the Keeneland September Yearling Sale, where he was consigned by his breeders’ Airdrie Stud.

Mo Donegal, a bay son of Uncle Mo, stretched out from 6 1/2-furlongs to 1 1/16 miles to break his maiden at second asking on October 21 at Belmont Park. Mo Donegal, heavily coaxed around the far turn, found his second wind in deep stretch to win by 1 ½ lengths while recording an 82 Beyer.

Pletcher previously captured the Remsen with Bluegrass Cat [2005] and Overanalyze [2012], both of whom contested in the following year’s Kentucky Derby.

“We feel like the mile and an eighth will suit him well,” Pletcher said. “He had a good work at Belmont last week. It seems like the further he goes, the better he gets.”

Mo Donegal was bought for $250,000 from the Ashview Farm consignment at the Keeneland September Yearling Sale. He is out of the Pulpit mare Callingmissbrown, who is out of the Grade 1-winning millionaire Island Sand.

Hall of Famer Shug McGaughey will seek a fifth Remsen victory when sending out Judge Davis, who was a last out third in the Grade 3 Nashua on November 7 at Belmont Park.

Owned by Donald and Donna Adams Courtlandt Farms, the Distorted Humor bay was a distant fourth to eventual graded stakes winner Major General in his August debut at Saratoga going six furlongs before stretching out to 1 1/16 miles to break his maiden on September 24 over a muddy main track at Belmont Park.

Jose Ortiz will return to the saddle aboard Judge Davis, who adds blinkers, from post 3.

The son of leading third crop sire Constitution broke his maiden at second asking in August going six furlongs at Colonial Downs. Following a distant fourth in a return to grass at Laurel Park, Mr. Jefferson added blinkers and defeated winners at 1 1/16 miles over the Laurel main track on November 4.

Mr. Jefferson is out of the Malibu Moon mare Clockstrucktwelve – a half-sister to multiple stakes-winner Never Enough Time.

Owners Cash Is King Racing and L C Racing and trainer Butch Reid, Jr. captured the 2018 Remsen with Maximus Mischief and will vie for another victory with Eloquist.

The son of Nyquist found the winner’s circle last out when capturing a one-mile maiden event on October 20 at Parx. The win was a major turnaround in form for Eloquist, who  finished a distant sixth in his prior two starts.

Trainer Jorge Abreu will saddle Gold Square’s New York-bred stakes-placed Who Hoo Thats Me, who was a last-out third in the Sleepy Hollow on October 30 at Belmont. The son of freshman sire Keen Ice broke his maiden at third asking by two lengths on September 25 at Belmont.