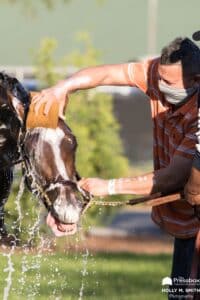 One of America’s most consistent and talented 3-year-olds throughout 2021, Hot Rod Charlie heads a field of seven three year olds and up in Sunday’s Grade II, $200,000 San Antonio Stakes at Santa Anita.  An iconic prep to the Grade I Santa Anita Handicap, the San Antonio will be run for the 84th time and is one of six graded stakes on a blockbuster 11-race Opening Day program.

Most recently fourth, beaten 4 ½ lengths by presumptive Horse of the Year Knicks Go in the Grade I Breeders’ Cup Classic Nov. 6, Hot Rod Charlie has been a gem of consistency, while on occasion very unlucky, for O’Neill.  A handy winner of the Grade I Pennsylvania Derby two starts back on Sept. 25, he was disqualified from a hard fought nose victory three starts back in the Grade I Haskell Invitational.

A massive second, beaten 1 ¼ lengths by A-Lister Essential Quality in the Grade I Belmont Stakes June 5, he was a troubled third, beaten one length by Medina Spirit in the Grade I Kentucky Derby five starts back on May 1.

A winner of the Grade II Louisiana Derby in his second start of the year on March 20, Hot Rod Charlie is 7-2-1-2 on the year, with 2021 earnings of $2,087,500.  Owned by Boat Racing, LLC, Gainesway Stable (Antony Beck), Roadrunner Racing & William Strauss, Hot Rod Charlie will reportedly use the San Antonio as a prep to the Group I Dubai World Classic in March.

Freshened since running third to Medina Spirit in the Grade I Awesome Again Stakes Oct. 2, C R K Stable’s Express Train has been in the money in six out of his seven career starts at Santa Anita and rates a big chance off the bench.  Trained by John Shirreffs, Express Train’s last win came three starts back in the Grade II San Diego Handicap on July 17.  With an overall mark of 14-4-4-3, this 4-year-old colt by Union Rags has earnings of $695,800.

A half length winner of the Grade III Native Diver Handicap on Nov. 20, Bob Baffert’s Azul Coastcould rate second billing as he seeks his second graded stakes win.  Owned by Mike Pegram, Karl Watson and Paul Weitman, Azul Coast, who has four wins from 10 starts, will be ridden for the first time by John Velazquez.

Sign Up
The Pressbox · 36 minutes ago
@thepressboxlts
May I please get 2 followers to COPY and re-post this tweet?