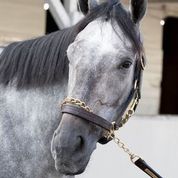 Oaklawn’s four-race Kentucky Derby points series, specifically the Rebel and Arkansas Derby, is littered with starters who were Eclipse Award winners at 2. A third race has finally drawn a champion, too.

The Southwest will offer 17 points to the top four finishers (10-4-2-1, respectively) toward starting eligibility for the Kentucky Derby.

Trainer Brad Cox won the first race in this year’s series, the $150,000 Smarty Jones Jan. 22, with Caddo River, who, in his stakes debut, recorded the most lopsided victory in race history (10 ¼ lengths). Essential Quality is much more accomplished. The gray son of super sire Tapit is unbeaten in three career starts, including the $400,000 Breeders’ Futurity (G1) Oct. 3 at Keeneland and the $2 million Breeders’ Cup Juvenile (G1) Nov. 6 at Keeneland to close his 2020 campaign.

Essential Quality has been based this winter at Fair Grounds, recording eight workouts in 2021, the last two (Feb. 14 and Feb. 20) coming after severe winter weather led Oaklawn to twice postpone the Southwest. It was originally scheduled to be run Feb. 15. Essential Quality, the 3-2 program favorite, arrived Wednesday night in Hot Springs for what Cox said he hopes is the first of two preps for the May 1 Kentucky Derby.

Cox, in large part, said he chose to start Essential Quality’s 2021 campaign in the Southwest, rather than the $400,000 Risen Star Stakes (G2) Feb. 13 Fair Grounds, because of distance.

“The mile and an eighth, off a layoff, I just didn’t think it made the most sense for him,” said Cox, who still won the nine-furlong Risen Star with Mandaloun. “We’re going to get through the first one before we decide where the second one will be. Off the layoff, the mile and a sixteenth just made more sense than a mile and an eighth.”

Essential Quality came from well off a hot pace in the Breeders’ Juvenile to post a three-quarter length victory under Luis Saez. Among seven Southwest entrants is the speedy Jackie’s Warrior, who suffered his first career loss in the Breeders’ Cup Juvenile when he was beaten 3 ¼ lengths in his two-turn debut. Jackie’s Warrior, on paper, is the speed of the speed in the Southwest.

“We’re not going to sacrifice our horse to do anything out of the norm,” Cox said. “We’re just going to let him run his race. Luis has obviously ridden him the last two times really well.”

Jackie’s Warrior was a multiple Grade 1 winner last year for Hall of Fame trainer Steve Asmussen. Like Essential Quality, Jackie’s Warrior (4 for 5) has been based this winter at Fair Grounds and will be making his 3-year-old debut in the Southwest, a race Asmussen has won three times.

Hall of Fame trainer Bob Baffert will send out Spielberg in search of a record-tying fifth Southwest victory. Named for Steven Spielberg, a two-time Academy Award winner for best director, Spielberg will be making his first start since a disappointing fourth-place finish in his 3-year-old debut, the $100,000 Robert B. Lewis Stakes (G3) at 1 1/16 miles Jan. 30 at Santa Anita.

Spielberg had a productive 2-year-old campaign, finishing second and third, as a maiden, in the $250,000 Del Mar Futurity (G1) at Del Mar and $300,000 American Pharoah Stakes (G1) at Santa Anita, respectively, and winning the $200,000 Los Alamitos Futurity (G2) at 1 1/16 miles Dec. 19 at Los Alamitos. The son of Union Rags, a $1 million purchase at the 2019 Keeneland September Yearling Sale, wasn’t originally nominated to the Southwest, but Baffert opted to hit the road after the race was postponed twice and Oaklawn reopened the nomination period.

“My horses are usually forwardly placed, but there’s a lot of speed in there,” Baffert said. “He’s not the kind of horse that would be on the lead. It looks like a pretty tough race.”

The Southwest will be Essential Quality’s first 2021 Kentucky Derby audition.

“Once the Breeders’ Cup was over and we let the dust settle, thought that we would start him back mid-February,” Cox said. “It would be nice to get two races in him, and hopefully he shows us enough to march forward to the first Saturday in May.”

Essential Quality (30), Spielberg (13) and Jackie’s Warrior (12) rank 2-8-9, respectively, on the Kentucky Derby points leaderboard, according to Churchill Downs. Saffa’s Day and Woodhouse are removing Lasix for the Southwest. Under new guidelines, points are only awarded to horses who compete without the anti-bleeder medication in Kentucky Derby points races.