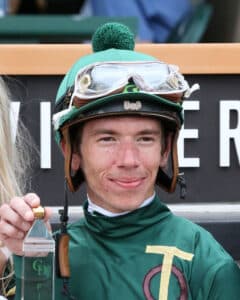 It was the 12th time a jockey has won six races on a single card at Churchill Downs but the first since Corey Lanerie in 2012. This was also the first time since 1907 that a rider has won with all six of their mounts, equaling Jimmie Lee.

“I was joking with the guys in the room that I wanted to ride one more and get the record,” Gaffalione said. “It was a really good day at the track.”

Jockeys Julien Leparoux (2008) and Pat Day (1984) are the only two riders to record seven wins on a single card at Churchill Downs.

0
0
The Pressbox · 5 hours ago
@thepressboxlts
Ellis Park's Own Could Have Shot at This Year's Groupie Doll Stakes - https://t.co/atuLUmEYzb https://t.co/M2R5uyTu8s
View on Twitter