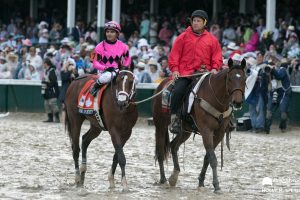 (Maximum Security was owned and raced by Gary and Mary West / Photos by Holly M. Smith)

Keeneland has announced that the 2021 November Breeding Stock Sale, from Nov. 10-19, will mark the start of an annual reduction of broodmares from prominent owners and breeders Gary and Mary West during the auction. Paramount Sales will serve as agent for the consignment, which this year will catalog 31 broodmares and broodmare prospects with broodmares in foal to Hard Spun, Union Rags and The Factor, as well as to the Wests’ champions Game Winner, Maximum Security and West Coast and Grade 3 winner and Grade 1-placed American Freedom.

As the Wests’ colts and their Breeders’ Cup Juvenile (G1) winner New Year’s Day were retired to stud, the couple acquired a large number of mares specifically to breed to them.

“We just can’t keep them all,” Ben Glass, the Wests’ Racing Manager, said about the mares. “It’s amazing how quickly we accumulated broodmares. We’re up to 100, and we only try to have 50-60. You just have to move those mares down the line. It’s a tough decision. For all we know, we’re selling the dam of another Grade 1 winner.”

The Wests have been longtime patrons of Keeneland sales.

Glass said the choice of the November Sale as the venue for the Wests’ annual reduction of broodmares stemmed from their working relationship with Keeneland and the sales company’s broad international buying base.

“We have a good working relationship with Keeneland,” Glass said. “They have always done a good job for us. There is a buyer there for every mare.”

While each mare cataloged to this year’s November Sale has a lot to offer, Paramount’s Pat Costello said several have attributes that will attract enhanced attention from buyers:

“Sweet Sweet Annie is a fine mare with good size and is from a hell of a family,” Costello said. “Applaud is a lovely individual from a real deep family that goes back to Hold That Tiger and Editor’s Note. Media Circus is also another nice mare, and she is from the family of Tapizar.”

Costello reiterated that the Wests are trying to trim their numbers with the reduction.

“They can’t keep them all.” Costello said. “They have a tremendous broodmare band and have fillies they race coming off the track and adding to it.”

“The Wests are passionate Thoroughbred owners and breeders, who have been very loyal patrons of Keeneland and have realized some of their greatest triumphs in racing thanks to horses they acquired here,” Keeneland Vice President of Sales Tony Lacy said. “We are grateful for the opportunity to annually offer mares from such a successful operation as an added attraction of the November Sale.”