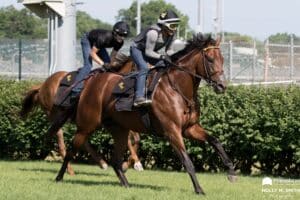 The youngster, 3-year-old Golden Pal, and the veteran, 8-year-old Extravagant Kid, top a field of seven entered Wednesday for Saturday’s 25th running of the $200,000 Woodford (G2) Presented by TVG going 5½ furlongs over the Keeneland turf course.

The Woodford Presented by TVG is the first of five graded stakes on Saturday’s 11-race program and will go as the sixth race with a 3:40 p.m. post time. First post Saturday is 1 p.m.

Ranlo Investments’ Golden Pal will be making his first Keeneland start since winning the Breeders’ Cup Juvenile Turf Sprint (G2) here to kick off the World Championships program. Trained by Wesley Ward, Golden Pal finished seventh in the Coolmore Wootton Bassett Nunthorpe (G1) at York in England in August in his most recent start.

Golden Pal will exit post two and be ridden by John Velazquez.

DARRS Inc.’s Extravagant Kid, earner of more than $1.6 million and winner of the Al Quoz Sprint Sponsored by Azizi Developments (G1) in Dubai in March, will be making his first Keeneland start since finishing fourth in the Breeders’ Cup Turf Sprint (G1) last November. Prior to that, he finished second in the Woodford Presented by TVG.