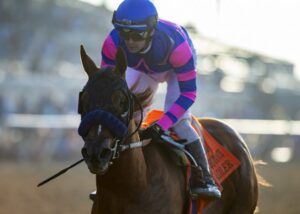 Owned by Willow Grace Farm and Michael Lund Petersen, Grace Adler has rallied from off the pace in both of her wins and seems well suited to the stretch-out in distance with regular rider Flavien Prat back aboard.  Out of the Newfoundland mare Our Khrysty, she’s banked $222,000.

Second to Grace Adler in the Del Mar Debutante, trainer Mark Glatt’s Dance to the Music was a runaway 4 ¾ length first-out maiden winner going 5 ½ furlongs and will retain the services of Abel Cedillo.  Owned by Red Baron’s Barn, LLC and Rancho Temescal, Dance to the Music, a Kentucky-bred filly by Maclean’s Music, was purchased for $575,000 out of the 2021 Ocala Breeders’ Spring Sale of Two-Year-Olds in Training this past April.

Baffert will also be represented by Censorship, who is owned by Mike Pegram, Karl Watson and Paul Weitman.  Although winless in three starts, she stumbled badly leaving the gate as the even money favorite in her most recent assignment, a one mile maiden race on Aug. 26, finishing second, beaten 4 ¼  lengths by Desert Dawn, who she’ll again face on Friday.

Trainer Phil D’Amato will be sending out a three talented fillies in the Chandelier, headed by Elm Drive, who was a game head winner of the Grade II Sorrento Stakes two starts back on Aug. 6 and who comes off a disappointing seventh following a rough start in the Grade I Del Mar Debutante.  Owned by Little Red Feather Racing, Elm Drive won her first start going five furlongs by eight lengths and earned a lofty 85 Beyer Speed Figure in winning the Sorrento.  She’ll try two turns for the first time and be ridden for the fourth consecutive time by Juan Hernandez.

D’Amato’s Desert Dawn rallied nicely under Ricky Gonzalez to break her maiden in what was her second start at odds of 6-1.  With the one mile win to her credit, this Arizona-bred filly by Cupid is owned by her breeders, the H & E Ranch.

D’Amato will also saddle first-out winner Ain’t Easy, who pressed the early pace and opened up through the lane to win going 5 ½ furlongs by 5 ¼ lengths on Aug. 21 at Del Mar.  A $400,000 Keeneland September Yearling, Ain’t Easy, who was dismissed at 8-1 in her debut, is owned by Old Bones Racing Stable, LLC, Michael Lombardi and Joey Platts.

The Chandelier is one of four stakes on Friday’s opening day program.   For additional information, please visit Santaanita.com or call (626) 574-RACE.