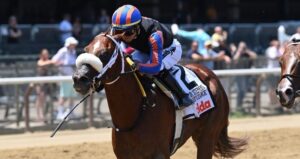 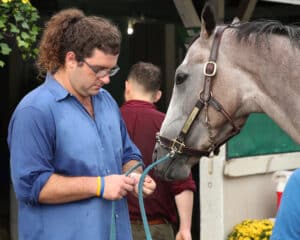 Grade 1 winner Drain the Clock breezed a half-mile in 45.48 seconds Sunday morning at Gulfstream Park, producing the fastest of 53 workouts timed at the distance in preparation for a return to action Friday.

The 3-year-old son of Maclean’s Music, who captured the Woody Stephens (G1) on the June 5 Belmont Stakes undercard, has been on the sidelines since finishing fourth in the H Allen Jerkens Memorial Stakes (G1) August 28 at Saratoga. Sunday’s breeze was the latest in a series of five workouts in preparation for his return in a six-furlong optional claiming allowance in Friday’s Race 7 feature.

“He’s had good preparation. We’ll get him started in the allowance and after that we’ll come up with a plan for where we’ll go to next,” trainer Saffie Joseph Jr. said.

Tyler Gaffalione has the mount on Drain the Clock, who will take on six rivals, including Todd Pletcher-trained Nocturnal, who has been idle since breaking his maiden and winning an optional claiming allowance back-to-back during last season’s Championship Meet.

Drain the Clock has won three races in four starts at Gulfstream, including last season’s Swale (G3). His only loss at Gulfstream came in a second-place finish in the two-turn Fasig-Tipton Fountain of Youth (G2).

The 2-year-old daughter of Kitten’s Joy scored a 14-1 upset victory after saving ground while rating off the early pace in the mile maiden special weight race on turf carded as Race 3. After cutting the corner into the stretch and caught behind a wall of horses in mid-stretch, Alvarado took advantage of room that opened up along the rail, and the homebred filly surged through the opening to prevail by a half-length.

“He got a great trip, saving ground. When we turned for home, I was just hoping for a little bit of room, and when I found it, she gave me a very nice kick at the end,” Alvarado said.

Alvarado returned to South Florida last season to ride during the Championship Meet after spending several winters in New York, riding 53 winners to rank seventh in both victories and purses-won.

“I love it here. Even before getting here, it was getting into the 20s and 30s. It was already getting a little chilly there,” said Alvarado, who also scored aboard favored Strike Hard in Sunday’s Race 9 feature. “Moving here and getting the great sunshine does make you ride better.”

The 20-cent Rainbow 6 gross jackpot pool will be guaranteed at $250,000 at Gulfstream Park when racing action resumes on Wednesday with a 10-race program on which three-time defending Championship Meet titlist Irad Ortiz Jr. will make his seasonal debut.

The Rainbow 6 sequence will span Races 5-10, including the 1 1/16-mile optional claiming allowance feature on turf in Race 9. Ortiz, who is scheduled to ride in five races Wednesday, has been named to ride Roger Attfield-trained Sweet Serenade, a 3-year-old daughter of Tonalist, who has never been off the board in five career starts.