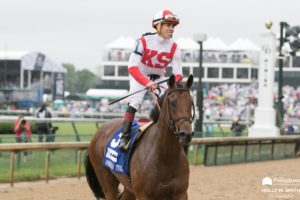 Ortiz is named in six of 10 races starting with Macedonian in Race 2 for trainer Saffie Joseph Jr., who leads the Championship Meet with 21 wins through the first 23 days including Unsociable ($6.80) and Novo Sol ($23.80) Wednesday. Ortiz also has mounts in nine of Friday’s 10 races.

Last winter, Ortiz set a Championship Meet record with 140 wins, breaking the mark of 137 set by Luis Saez in 2017-2018. Ortiz reached the milestone by riding Known Agenda to victory in the Curlin Florida Derby (G1) presented by Hill ‘n’ Dale Farms at Xalapa.

Only Hall of Famer Javier Castellano, who did it a record five times between 2011-2012 and 2015-2016, has won as many as four consecutive Championship Meet titles. Ortiz spotted his competition a sizeable head start while serving a 30-day suspension for careless riding aboard Gran Casique Dec. 3 at Aqueduct.

Ortiz has not ridden since notching three victories on the Dec. 5 Clasico Internacional del Caribe program at Camarero Racetrack in Puerto Rico. He also finished second in the Copa Invitacional de Importados (G1) with Luna Fortis.

The 20-cent Rainbow 6 gross jackpot pool will be guaranteed at $1.2 million for Thursday’s 10-race program at Gulfstream Park.

Thursday’s Rainbow 6 sequence begins in Race 5, a maiden special weight for 3-year-olds scheduled for one mile where the narrow 3-1 program favorite is Fiery Heart. West Point Thoroughbreds, St. Elias Stable and Repole Stable’s Fiery Heart, purchased for $475,000 last Mach as a 2-year-old in training, will be racing with Lasix for the first time after finishing third in his Dec. 4 debut Dec. 4 on the Aqueduct turf for Hall of Fame trainer Todd Pletcher.

Race 7 is a maiden special weight for Florida-bred 3-year-old fillies sprinting 5 ½ furlongs topped by Alex and JoAnn Lieblong’s first-time starter Sadie Bear. Listed at 2-1 on the morning line, the daughter of The Big Beast that has been working steadily toward her unveiling at Gulfstream for trainer David Fawkes.

Whitham Thoroughbreds’ multiple Grade 3-winning mare Four Graces figures to be a short-priced favorite as she makes her return in Race 8, an optional claiming allowance for fillies and mares 4 and up going six furlongs. Four Graces put together a three-race win streak in 2020 that included the Dogwood (G3) and Beaumont (G3). Second in the Eight Belles (G2), she raced just once in 2021, finishing fourth in last summer’s Roxelana to Bell’s the One, who went on to win a pair of Grade 2 stakes.

Race 9 is a five-furlong turf sprint for older Florida-breds where Discreet Tune and Henry’s World will face off for the second straight race after respectively running fifth, beaten 2 ½ lengths, and 10th in the Claiming Crown Canterbury Dec. 4 at Gulfstream. Zanno and Richy both enter the race off Gulfstream wins, each at the distance, the latter over the Tapeta surface.

Saturday’s program featuring the 44th running of the $100,000 Tropical Turf (G3) will also include a mandatory payout in the Rainbow 6 as well as the 50-cent Late Pick 5 and $1 Super Hi-5 wagers.