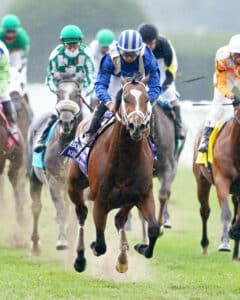 Grade 2 winners Largent, unraced since a runner-up finish in the 2021 Pegasus World Cup Turf (G1), and stablemate Mutasaabeq, who captured the 2021 Mucho Macho Man, head a list of 14 horses nominated to the $100,000 Tropical Turf (G3) for 4-year-olds and up going one mile Jan. 8 at Gulfstream Park.

Shadwell Stable’s Mutasaabeq, another Pletcher trainee, went to the sidelines after capturing the one-mile Mucho Macho Man on dirt last January at Gulfstream. The Into Mischief colt has raced twice previously on the grass, including a victory in the October 2020 Bourbon (G2) going 1 1/16 miles at Keeneland.

Mutasaabeq worked five furlongs in 1:00.23 Sunday at Palm Beach Downs, the fastest of four horses, in his eighth timed breeze since mid-November.

Another horse nominated off a long layoff is Paradise Farms Corp.’s Bemma’s Boy, a 6-year-old Into Mischief gelding that has not raced since his neck victory over Mike Maker-trained stablemate Zulu Alpha, winner of the 2020 Pegasus Turf, in the March 2020 Pan American (G2) at Gulfstream. Bemma’s Boy returned to the work tab last September at Ellis Park and has breezed steadily since, his last five coming at Gulfstream.

Maker also nominated Three Diamonds Farm’s Field Pass, last out winner of the 1 1/16-mile Seabiscuit Handicap (G2) Nov. 27 at Del Mar. The 4-year-old son of Lemon Drop Kid also has four Grade 3 victories to his credit including the Baltimore-Washington International Turf Cup at historic Pimlico Race Course last June, and won the 2020 Dania Beach in his only previous try over the Gulfstream turf.

The 20-cent Rainbow 6 gross jackpot pool will be guaranteed at $1.1 million for Wednesday’s nine-race program at Gulfstream Park.

Wednesday’s Rainbow 6 sequence spans Races 4-9, kicked off by a 1 1/16-mile maiden special weight for 4-year-olds and up that includes a pair of six-figure yearlings from 2019 – Grandview Equine, Cheyenne Stable and LNJ Foxwoods’ Scalding, trained by Hall of Famer Shug McGaughey, who ran second Dec. 2 at Aqueduct in his second start; and Boama Corporation’s Unexpected, third Dec. 17 at Gulfstream in his unveiling for trainer Eddie Plesa Jr.

Race 5 is an optional claiming allowance for 4-year-olds and up scheduled for 1 1/16 miles on the grass that drew an overflow field of 16 led by Arturo Toscanini, Group 3-placed in Ireland making his U.S. debut; local stakes winner Louder Than Bombs, twice Grade 3-placed; and Ginsburned, third in the Bruce D (G1) last August at Arlington Park.

The sequence wraps up in Race 9, an optional claiming allowance for 4-year-olds and up set to sprint five furlongs on the turf. Dubai Key, a Group 3 winner in Chile, was a front-running winner of his North American debut Nov. 13 at Gulfstream going five furlongs on the Tapeta surface. Elusive Mischief is a stakes winner on both turf and dirt for trainer Ian Wilkes.