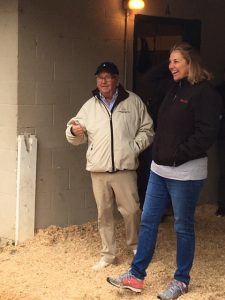 Hall of Fame trainer Shug McGaughey will have two chances in Monday’s $100,000 Tropical Park Oaks at Gulfstream Park to get off to a fast start for the 2022-2023 Championship Meet on the Opening Day program.

Personal Best ran the best race of her seven-race career in her most recent start in a 1 3/8-mile allowance on turf at Aqueduct, where she stalked the pace before drawing clear by 4 ¾ lengths.

“Her last few races have been really good, the last one especially. She’s a filly we’ve always been pretty high on,” said McGaughey, who will also saddle Fort Washington for a start in the Tropical Park Derby. “A mile and a sixteenth may not be her best gig, but I like her a lot. I think, throughout the year, she’ll be a very useful horse.”

The homebred daughter of Tapit will be making her stakes debut in the Tropical Park Oaks with Irad Ortiz Jr. in the irons.

“She’ll be a little back in this race, but Irad will have her where she’s supposed to be, and we’ll go from there,” McGaughey said. “She’s shown some speed going longer. I don’t know what she’ll do going shorter.”

Surprisingly won her first two starts of 2022, impressively drawing away to victory at Horseshoe Indianapolis in June and Ellis Park a month later. She was compromised by early traffic before finishing seventh in the Virginia Oaks at Colonial Downs in her most recent start Sept. 8.

“She ran a good race in Virginia coming off a couple allowance races and wasn’t beat that far. We’ve trained her here for a good while and she’s been doing really, really well,” McGaughey said. “I thought it was worth taking a chance [in the Tropical Park Oaks] – her last chance running against 3-year-olds.”

Edgard Zayas has the call on the daughter of Mastery.

Michael Nentwig, Michael Dubb, Beast Mode Racing LLC, John Rochfort and trainer Robert Falcone Jr.’s Spirit And Glory, who rallied from last to win the Virginia Derby, will be awaiting Surprisingly in the Tropical Park Oaks. The Irish-bred daughter of Cotai Glory finished fifth in the Sands Point (G2) and fourth in the Winter Memories at Aqueduct in her two subsequent starts.

Isaac Castillo is scheduled to ride Spirit And Glory for the first time Monday.

Fortune Racing LLC’s Candy Light, who was three-quarters of a length ahead of Spirit And Glory while finishing second in the Winter Memories, is slated for a return in the Tropical Park Derby. The Graham Motion-trained daughter of Candy Ride had finished third behind Spirit And Glory two starts earlier in the Virginia Oaks.

Jose Ortiz has the call aboard Candy Light.

John Gallegos’ My Philly Twirl, who captured her third straight race during last season’s Championship Meet in the Sanibel Island; St. George Stable LLC’s Omixochitl, who weakened to finish fifth in the Virginia Derby after leading in the stretch; and Diamond 100 Racing Club, Amy Dunne and Patrick L. Biancone LLC’s Diamond Wow, a stakes-winning daughter of Lookin At Lucky who finished second in the 2021 Jessamine (G2) at Keeneland; are among other top contenders in the Tropical Park Oaks.

Jumeirah, Frosted Oats and Gunesh round out the field.