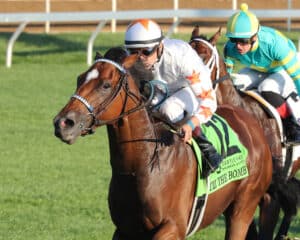 Smile Happy, the undefeated winner of the Kentucky Jockey Club (G2), and Tiz the Bomb, a graded-stakes winner who finished second the Breeders’ Cup Juvenile Turf (G1) last time out, were timed in 46.32 seconds, the third fastest clockings of 83 workouts recorded at the distance.

“It was a nice maintenance work. They went a little quicker than I wanted them to. I gave them instructions to go in about 48,” trainer Kenny McPeek said. “But it’s Ok. They’re doing good.”

The breeze was the fourth in a series of workouts at Gulfstream for the workmates.

While Smile Happy and Tiz the Bomb have teamed in their workouts, they may well become rivals in the Holy Bull, the first graded-stakes for 3-year-olds on the Road to the Curlin Florida Derby (G1).

“I may have to run them against each other in the Holy Bull to get the year started,” McPeek said. “At this point, I’m planning to run both.”

Smile Happy, a son of Runhappy, has won both of his career starts in going-away style, closing from far back to break his maiden at 1 1/16 miles Oct. 29 at Keeneland before rallying from mid-pack to capture the 1 1/16-mile Kentucky Jockey Club by 3 ¼ length at Churchill Downs Nov. 27.

Tiz the Bomb broke his maiden on dirt by 14 ½ lengths in a mile race at Ellis Park in his second career start July 2 before going on to win the Kentucky Downs Juvenile and Bourbon (G2) at Keeneland on turf. The son of Hit It A Bomb concluded his 2021 season with a late-surging second-place finish in the Breeders’ Cup Juvenile Turf (G1) at Del Mar.