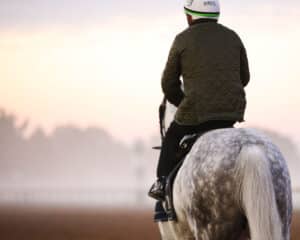 The Horseracing Integrity and Safety Authority (HISA) Board of Directors announced today that Lisa Lazarus will serve as Chief Executive Officer of the Authority starting February 15, 2022. The board reached this decision after engaging Russell Reynolds to undertake a nationwide search for a permanent Chief Executive Officer. Under Lazarus’ leadership, HISA will implement the racetrack safety program on July 1, 2022, engage a best-in-class independent enforcement agency to oversee the Authority’s Anti-Doping and Medication Control (ADMC) program, and work with stakeholders across the U.S. to evaluate and improve both programs on an ongoing basis.

“We are thrilled to have Lisa on board as we approach HISA’s program effective date in six short months” said Charles Scheeler, Chairman of the Board of Directors. “Her deep background in sports business and law will be on full display as she leads the racing industry into a new, safer era of clean competition under uniform rules and regulations.”

“I look forward to working with the impressive and diverse array of independent and industry experts at HISA to make racing safer and fairer for all. As someone who has worked with the industry over the course of my career, and as a horse lover, I’m honored to be taking on this role,” said Lazarus.

Lazarus established and leads the Equestrian Practice at Morgan Sports Law, where she provides counsel on health and safety issues and rule compliance in addition to representing athletes, owners and trainers in disputes before national and international governing bodies. Prior to joining Morgan Sports Law, she served as General Counsel and later Chief of Business Development & Strategy at the Fédération Equestre Internationale, the international governing body for equestrian sports. Prior to her focus on the equine sporting industry, Lazarus spent a decade at the National Football League where she served as the league’s Labor Relations Counsel, representing the NFL’s 32-member clubs in collective bargaining issues and in contested arbitrations, including anti-doping enforcement matters. She then became Senior Legal Counsel before taking the role of Senior Director of Partner Development for NFL International at their headquarters in London, England. Lazarus began her legal career working as an associate at Akin Gump for four years after graduating from Fordham University School of Law and clerking for a Federal District Court Judge in Memphis, Tennessee.

Under the leadership of Interim Chief Executive Officer Hank Zeitlin, the Authority’s advisory committees drafted proposed rules and regulations and sought industry feedback through an extensive stakeholder engagement process, resulting in the successful submission of the Racetrack Safety Program to the Federal Trade Commission on December 6. The ADMC Committee worked with USADA to release six documents for public input, including the proposed Equine Protocol, Prohibited List, Definitions, Equine Arbitration Procedures, Testing and Investigation Standards, and Standards for Laboratories and Accreditation.

“The significant progress achieved in just a short period of time is a testament to Hank’s professionalism and intimate knowledge of the racing industry. He convened a small yet highly capable staff to undertake this enormous effort with the advisory committees, and the work products speak for themselves,” said Scheeler. “The Board of Directors deeply appreciate Hank’s leadership and service to the racing community.”

“Being a part of the process to improve and modernize the sport has been a privilege,” said Zeitlin. “I look forward to working with Lisa in the coming months as my time at HISA comes to a close. There is no doubt in my mind that the Authority is in good hands as it continues its mission to protect the athletes, both equine and human, and the integrity of the sport.”