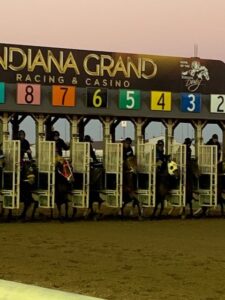 Lots of activities including; IN Champions Day Swag (sweatshirts, license plates, beanies, backpacks & blankets); strolling magician and stilt walker; cigar rolling station (free cigars to the first 200 plus IN Champions Day matchbooks); register to win one of five $1,000 Megabet Win Wagers (3 will be on Race 7 and 2 will be on Race 13); a $1,000 Thoroughbred Champions Handicapping Contest (Races 3 – 7) and a $1,000 Quarter Horse Champions Handicapping Contest (Races 9 – 13) – the top 5 from each contest will win their share of $1,000 with 1st place earning $500; 5th place gets an IN Champions Day Swag Bag; and two book signings (2-5PM outside the Derby Suite) – Otto Thorwarth, who portrayed Ron Turcotte in the Disney movie “Secretariat” will sign his book “No Ordinary Champion.” Tina Cleary, former QH jockey, will sign her book “Growing Up With Moocher” based on an Indiana racehorse. The day is capped off by an appearance from the Headless Horseman after Race 12!

Rodney Prescott is 4 wins away from 4,000 – he is at 3,996. Prescott, a native of Portland, Ind., has competed in Indiana since the inaugural season of pari-mutuel racing in 1995 and is the state’s all-time leading jockey with more than 1,100 career wins.

The top 5 TB jockeys have all earned in excess of $2 million this season in purse earnings – Marcelino Pedroza Jr., DeShawn Parker, Sammy Bermudez, Joe Ramos and Fernando De La Cruz. Pedroza, Parker and De La Cruz have all won Leading Jockey Titles at Indiana Grand and Joe Ramos was the Leading Apprentice in 2019. A total of 11 jockeys have now earned in excess of $1 million in purses this year in Indiana.

There are currently four trainers who have moved over the $1 million mark in earnings this season:  Mike Lauer, Genaro Garcia, Randy Klopp and Brad Cox. Randy Klopp is leading in wins with 52.

The connections of Unreachable Star, multiple stakes winner and 2-time Horse of the Year from the Tim Glyshaw Stable and Indiana’s fourth all-time leading Indiana bred money earner with $784,595, are making a $500 donation in his honor to Friends of Ferdinand for racehorse aftercare programs. They are very supportive of racehorse aftercare programs and want to honor Unreachable Star with a donation.

Today’s 2nd running of the Lady Fog Horn Stakes is named in honor of Indiana’s top money earning mare, Lady Fog Horn, who raced for The Elkstone Group and trainer Tony Granitz. She holds the record for most stakes win in one season (4 – 2015) and most purse earnings in one season ($323,535 – 2015). She earned $824,273 during her career. Piedi Bianchi is closing in on that tally as she wraps up her career this year with $823,497.

A transfer from Hoosier Park in 2013, the stakes was named in honor of one of the state’s first top stallions, Crown Ambassador, who stood at Swifty Farms. He sired 12 Indiana stakes winners,  including Pass Rush, who later stood at Swifty as a Graded Stakes winner, and Ellen’s Lucky Star, 7-time stakes winner, during his reign at the Seymour, Ind. farm. He died in 2009 as the state’s all-time leading sire in Indiana.

Congratulations to Keens Blood Legacy, the first foal from the tough stakes winning mare Keen Liaison – the Apollitical Blood gelding was a winner in the Miss Roxie Little Futurity Consolation Thursday after finishing 11th on the list for the final. He had a trial time of :18.303…the 10th place finisher that advanced into today’s Miss Roxie Little Futurity Final had a time of :18.300.

9th Running of the Indiana Championship

25th Running of the Governor’s Stakes

The QHRAI Derby and Governor’s Stakes are two of the three original stakes races implemented during the inaugural season of pari-mutuel QH racing in 1997. The races were held at Hoosier Park until the state went to one breed, one track and were transferred to Indiana Grand in 2013.

This eight-year-old gelding is a 3 time Canadian Horse of the Year and is a two-time winner of the Bradford Stakes at Indiana Grand (finished second this year by a nose to WRs Valentino. He’s been owned by Ruth Barbour his entire career and now has in excess of $443,000 – he’s part of the field for the Indiana Championships today (Race 12).

High Rolling Seize is the son of Seize the Win, who was a multiple stakes winner in Indiana for trainer Matt Frazier. Now, with the same ownership connections, his 2YO son is a stakes winner, earning the title in the $192,000 QHRAI Stallion Service Auction Futurity.

WRs Moonin Thewagon goes for his seventh straight win in today’s QHRAI Derby – His wins date back to Aug. 5, 2020! His father, Moonin the Eagle, passed away just two weeks ago.

Randy Smith, Indiana Grand’s All-Time Leading QH Trainer, eclipsed a mark he set last year for most wins in one season. Smith set the record at 54….he comes into today’s races with 68 wins in 2021 for the new record, and counting. Smith also recently eclipsed his own record for most purse earnings in one season ($1,490,528 in 2020); he currently has $1,535,957 accumulated this year.

Indiana Grand is proud to be the host for the 2022 Bank of America Challenge Championships Sat. Oct. 22, 2022. To help support the event, Indiana Grand recently teamed up with Heritage Place Yearling Sales and AQHA to offer a $15,000 bonus to the highest placing two-year-old next year in the Juvenile Challenge that is a graduate of this year’s September or November yearling sale.

$20 to Win on California Angel:

The top 10 finalists are now set for next week’s $1,200 Exactamundo Final Thurs. Nov. 4. A total of 119 players vied for a spot in the final worth $1,200. The contest began in early September and offered 9 preliminary rounds with points each week cumulative. The contest is open to players both on-track and on-line. The final includes 4 players from on-track out of the Top 10 Finalists.

The final day of racing is Thursday, Nov. 11 featuring Veterans Day – ice scraper mitt & Tumbler giveaway and the $75,000 Salute the Heroes Stakes – First Post is 2:25PM  PLUS – a special Pick 5 – AND TVG’s Caton Bredar will be here! 20 handicappers across the world will select Pick 5 tickets worth $250 with proceeds going to Homeless Veterans and Families (HVAF) of Indiana!

Indiana Grand will host a qualifier for the National Horseplayers Championship (NHC) Saturday, Dec. 4. The top 4 handicappers will advance to the final set for Jan. 28 – 30 at Bally’s in Las Vegas. ALSO – the top 4 handicappers will share $10,000 in prize money plus they get a trophy. It’s a $500 Live Money contest and there is no entry fee – the event will include a free buffet, t-shirt, DRFs and programs, and soft drinks, tea and coffee in the Clubhouse. Info is now available online at www.indianagrand.com.

Special Handicapping contest is coming Sunday, Dec. 26! Will feature the prep races leading up to the 2022 Kentucky Derby – the contest will also offer a unique feature and players can “opt in” for a chance to purchase a yearling at the 2022 ITOBA Yearling Sale – the Opt In will also include money for training and upkeep for the yearling leading up to its racing debut in 2023! More details soon on the event.