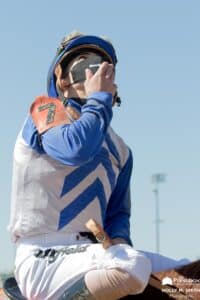 Having won more races at a single Championship Meet than any jockey in history, Irad Ortiz Jr. returns to Gulfstream Park for the 2021-2022 season with his sights set on a fourth straight riding title.

Already, the 29-year-old Ortiz is in elite company as one of just four riders to lead the country’s premiere winter meet standings three consecutive years, along with Jeff Fell (1977-79), Jorge Chavez (1999-2001) and Javier Castellano. Hall of Famer Castellano won a record five straight before being unseated by Luis Saez in 2016-17.

Ortiz ended Saez’s two-year reign to start his own streak in 2018-2019 and, after flirting with Saez’s single-season standard of 137 wins that year before ending with 135, surpassed it in dramatic fashion by guiding Known Agenda to a 2 ¾-length upset of the Curlin Florida Derby (G1) presented by Hill ‘n’ Dale Farm at Xalapa for No. 138.

Represented by agent Steve Rushing, Ortiz would finish with 140 wins including the $1 million Pegasus World Cup Turf (G1) with Colonel Liam who, like Known Agenda, is trained by Hall of Famer Todd Pletcher. They also teamed up with Fearless in the WinStar Gulfstream Park Mile (G2), Con Lima in the Herecomesthebride (G3) and Always Shopping in the La Prevoyante (G3).

In all, Ortiz won 14 stakes last winter including the Gulfstream Park Sprint (G3) on Mischevious Alex. On Feb. 6, he won six of 12 races, one victory shy of the single-day track record shared by Saez, Tyler Gaffalione, Paco Lopez and Hall of Famer Jerry Bailey.

“It was a great meet last year for me. What I can I say?” Ortiz said. “I have to say thank you to all the people for their help. Without their help and their support, it wouldn’t be possible, honestly. I want to go and have fun and enjoy my time there. It’s great weather, it’s great racing and, hopefully, we can do it again.”

Ortiz heads to Gulfstream off a November to remember that began at Del Mar, where he earned his fourth straight Bill Shoemaker Award as top jockey during the Breeders’ Cup World Championships following wins in the Dirt Mile (G1), Turf Sprint (G1) and Juvenile Turf Sprint (G2). He also finished second in the Turf (G1).

From there he returned to New York and won three more stakes including the Red Smith (G2). On Nov. 23, he won three stakes at Zia Park in New Mexico for Hall of Fame trainer Steve Asmussen, including the Zia Park Derby and Oaks; went to Kentucky for the Clark (G1) where he finished off the board with Pletcher’s Dr Post; and was back in California to ride for regular client Chad Brown. While there, he won the Jimmy Durante (G3) for a second straight year.

“I’ve been doing good, thank God. My agent does a great job,” Ortiz said. “Those are three great trainers and three people that we ride for. We went and did the best we could and I’m happy.”

Ortiz has been voted the Eclipse Award as North America’s champion jockey each of the last three years, and will be prominent in the discussion again in 2021. Entering December, he ranked first in North America in wins (327) and has won 57 stakes, 33 of them graded, including 10 Grade 1 races. He was second to Joel Rosario in purses earned with $28,534,585 and holds the single-season mark of $34.1 million set in 2019.

This year marks Ortiz’s seventh straight with at least 300 wins and eighth in a row topping $20 million in purse earnings. He picked up his 3,000th career victory Oct. 7 at Belmont Park on Saratoga Kisses for owner-trainer Rudy Rodriguez, a total that included 92 wins in his native Puerto Rico, according to Equibase.

Following the 2020-2021 Championship Meet, Ortiz finished second during Belmont Park’s spring meet by two wins to younger brother, Jose, as well as to Saez at Saratoga. Winner of the Belmont fall meet by a single victory over his sibling, Ortiz was tied with Jose Lezcano atop Aqueduct’s fall meet standings.