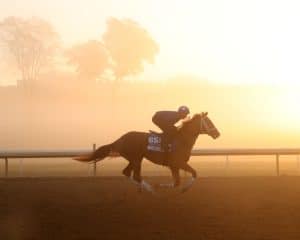 Keeneland’s position at the center of the global Thoroughbred industry reaches a pinnacle Friday and Saturday when the track hosts the Breeders’ Cup World Championships and continues Monday for Book 1 of the November Breeding Stock Sale. The sale, which covers 10 sessions through Nov. 16, features a number of proven producers, broodmare prospects and weanlings with connections to horses entered in the Breeders’ Cup

On Nov. 17, Keeneland will hold the November Horses of Racing Sale as a stand-alone auction for this segment of the market.

Take Charge Angel, whose half-brother Cave Rock is the undefeated 4-5 morning-line favorite for the FanDuel Breeders’ Cup Juvenile (G1) Presented by Thoroughbred Aftercare Alliance, has been supplemented to Book 1.

In foal to McKinzie, Take Charge Angel is a daughter of Will Take Charge out of the Bellamy Road mare Georgie’s Angel. She won her career debut at Churchill Downs and two races later in her 3-year-old debut finished a half-length behind future champion Covfefe in a Keeneland allowance.

Gainesway, agent, consigns Take Charge Angel and her first foal, a weanling colt by McKinzie, who is Hip 193 in Book 1.

The latest round of supplements to the Nov. 17 November Horses of Racing Age Sale consists of 13 horses, including:

Among the cataloged in-foal mares are these producers of Breeders’ Cup hopefuls:

These Breeders’ Cup entrants are cataloged as racing or broodmare prospects:

Weanlings who have siblings entered in the Breeders’ Cup are:

Additional horses cataloged to the November Breeding Stock Sale include:

Other standouts in Book 1

At 12:30 p.m., before the 1 p.m. start of the Book 1 session on Nov. 7, a 2.5 percent fractional interest in Breeders’ Cup Classic (G1) morning-line favorite Flightline will be offered for sale with in-person, online and phone bidding available. Bidders must pre-register to fid on this fractional interest (Hipn1F). For more information, visit Keeneland.com/flightline.

The auction is being launched in conjunction with a first-of-its-kind Metaverse experience designed to replicate the excitement of the November Breeding Stock Sale.

More than 3,700 horses are cataloged to the November Breeding Stock Sale, which will present the following schedule:

Each remaining session begins at 10 a.m.:

November Horses of Racing Age Sale – Thursday, Nov. 17. A total of 333 horses are presently cataloged to the sale, which begins at noon.

All Keeneland sales are livestreamed at Keeneland.com.

Sign Up
The Pressbox · 2 hours ago
@thepressboxlts
Horse to Watch: Capella May Be On the Rise - https://t.co/OyTQYyvBGI https://t.co/ib4Ubigmrs
View on Twitter

0
0
The Pressbox · 2 hours ago
@thepressboxlts
Horse to Watch: Capella May Be On the Rise - https://t.co/OyTQYyvBGI https://t.co/ib4Ubigmrs
View on Twitter

The Pressbox2 hours ago
New post added at The Pressbox - Horse to Watch: Capella May Be On the Rise

The Pressbox2 hours ago
New post added at The Pressbox - Hoosier Philly: Could KY Derby Be in Her Future?

(Hoosier Philly / Photos by Holly M. Smith) Will Hoosier Philly Run In Kentucky Derby? It is too soon to begin the discussion in earnest — perhaps — but the questions are starting to percolate. If the undefeated and spectacular filly Hoosier Philly continues to dominate her classmates this Sprin...
3    View on Facebook