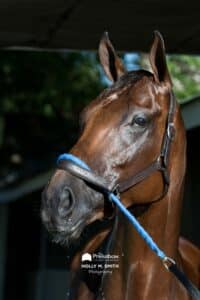 St. George Stable’s Letruska, who made Keeneland her main base of operations during an Eclipse Award-winning campaign in 2021, worked 5 furlongs in 1:02.40 over a fast track Friday morning. (Click here for a video of the work.)

The champion older dirt female for 2021, Letruska compiled an 8-6-1-0 record last year that included four Grade 1 victories. One of those came during Keeneland’s Fall Meet when she won the Juddmonte Spinster.

Letruska, who arrived at Keeneland last week from Palm Meadows Training Center in Florida, will follow a similar pattern to last year, according to trainer Fausto Gutierrez. She is using Keeneland to do the bulk of her training with the year-end goal being another start in the Breeders’ Cup here in November.

In late February, Letruska returned to the races with a victory in the Royal Delta (G3) at Gulfstream Park. Friday’s work was her fourth since that race.

“She is ready,” Gutierrez said. “She will leave Monday for Oaklawn Park (for next Saturday’s Grade 1 Apple Blossom) and then come back here.”

Saturday’s $400,000 Stonestreet Lexington (G3) will be make or break time for In Due Time’s chances of making the starting gate for the $3 million Kentucky Derby (G1) Presented by Woodford Reserve (G1) to be run May 7 at Churchill Downs.

Owned by the partnership of Edge Racing, Medallion Racing and Parkland Thoroughbreds, In Due Time enters the Stonestreet Lexington off a runner-up finish in the Fountain of Youth (G2) for which he earned 20 points toward the Derby. He would pick up another 20 points Saturday with a victory to vault him into the top 20 on the Derby leaderboard but in a tie with several other horses. (The tiebreaker to determine which of those horses will earn a berth in the Derby is earnings in nonrestricted stakes; with a win, In Due Time would have sufficient earnings to secure a start in the race.)

The Stonestreet Lexington is the final points race for this year’s Run for the Roses, which is limited to the top 20 point earners that pass the entry box May 2.

“We are going to let him do the talking,” trainer Kelly Breen said of In Due Time, who had an easy half-mile work here last Saturday.

“If he gets beat a (narrow margin), I’m going to the Preakness. That’s at the top of my mind,” Breen said if In Due Time doesn’t crack the top 20. “If he gets beat 17½ lengths, we’ll fall back and regroup.”

Larry Cordes’ Mighty Heart, named Horse of the Year for the second consecutive year, is stabled with trainer Josie Carroll at Keeneland, where he is to race in the April 23 Ben Ali (G3). Mighty Heart’s sire, Dramedy, won Keeneland’s Dixiana Elkhorn (G2) in 2015.

“I’m glad he got it,” said Sue Lorimer, Carroll’s assistant who was here this time last year when Mighty Heart was named Canada’s Horse of the Year for the first time. “He is going to have a work here this weekend, and he will get started back here like he did last year.”

Other Sovereign winners with Keeneland connections are:

Official Keeneland Tours. Visit keeneland.com/tours for availability and to purchase.

The Hill. No ticket or reservation is required for Keeneland’s popular free tailgating area on The Hill, which is open Fridays and Saturdays and offers a unique way to experience the Spring Meet. Fans on The Hill can participate in the racing action via a jumbo TV and wagering, while food trucks and live music presented by The Burl create a festive atmosphere. Those who wish to elevate their tailgating experience can book a premium package that includes tent, tables, amenities, reserved area for the day and more with the Tailgate Guys “A REVELxp Company.” Visit Keeneland.com/tailgating for details.

Sunrise Trackside. This morning program is geared toward families and offers a unique view of Thoroughbreds during training hours. Children’s activities, located on the first-floor Grandstand from 8-10 a.m., include a meet and greet with Keeneland’s mascot, Buckles, along with face painting, games and more. Fans can enjoy coffee and donuts at Clockers Corner while watching horses train. Mini tours are available at the Welcome Stand in the Paddock. A 30-minute demonstration in the Walking Ring at 8:30 will explain how horses communicate with their body language. This Saturday, Sunrise Trackside will include a visit by the Easter Bunny.

0
0
The Pressbox · 40 minutes ago
@thepressboxlts
Ellis Park's Own Could Have Shot at This Year's Groupie Doll Stakes - https://t.co/atuLUmEYzb https://t.co/M2R5uyTu8s
View on Twitter