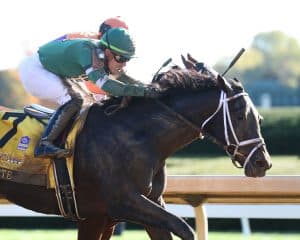 BREEDERS’ CUP 2-YEAR-OLDS OUT IN FORCE FOR PLETCHER

Repole Stable and St. Elias Stable’s Forte and Harrell Ventures’ Lost Ark, the respective winner and sixth-place finisher in the Oct. 8 Claiborne Breeders’ Futurity (G1) at Keeneland, breezed a half-mile together in :49.20 immediately after the track’s second renovation break at 9 a.m. Both are candidates for the $2 million FanDuel Breeders’ Cup Juvenile (G1).

“That was a pretty standard breeze from them,” Pletcher said. “They’re both solid work horses and are always willing. We were just hoping to see more of what they normally do.”

Pletcher was happy with the colts’ performances in the Claiborne Breeders’ Futurity.

“We felt like (Forte) handled the added distance (of 1 1/16 miles) and the two turns; he certainly looked like he relished it,” Pletcher said. “Lost Ark had a rough trip into the first turn and that kind of took him completely out of position. He finished up with some interest so that was encouraging.”

“I thought it was perfect,” Pletcher said. “Went off nicely, finished up well, good strong gallop out. Both got over the track (as if) they like it. It was a well-executed breeze.”

Life Is Good, winner of last year’s Dirt Mile, won the Woodward (G1) in his most recent start on Oct 1. He races for CHC Inc. and WinStar Farm.

“That was a good way to start the day. She was very happy out there,” said Geroux, who was aboard Slammed when she won the Thoroughbred Club of America (G2) on Oct. 8 to earn a spot in the $1 million Breeders’ Cup Filly and Mare Sprint (G1) here on Nov. 5.

Geroux, who has tallied four of his seven Breeders’ Cup victories at Keeneland with two each coming in 2015 and 2020, is looking at mounts in five or six races. The other marquee names are Cyberknife in the Big Ass Fans Breeders’ Cup Dirt Mile (G1) and Society in the Breeders’ Cup Distaff (G1).

Slammed is trained by Todd Fincher, who is expected to be on hand next week for the final works for Slammed and Breeders’ Cup Dirt Mile candidate Senor Buscador.

Fincher also trains Sheriff Brown, who worked 3 furlongs in :37.40 with Geroux aboard this morning. Sheriff Brown is being pointed to the 15th running of the $350,000 Thoroughbred Aftercare Alliance (G2) to be run at 1 5/8 miles here on Nov. 4.

Also on Friday, two Breeders’ Cup “Win and You’re In” victors owned by Susan Moulton and trained by Wayne Catalano – Manny Wah and Andthewinneris – returned to the work tab following their victories during Fall Stars Weekend.

Manny Wah, winner of the Stoll Keenon Ogden Phoenix (G2) on Oct. 7, worked a half-mile in :47.40 for the second-fastest move of 26 at the distance. Manny Wah is headed for the $2 million Qatar Racing Breeders’ Cup Sprint (G1), a race in which he finished fifth in here in 2020.

Shortly after Manny Wah, Castle & Key Bourbon (G2) winner Andthewinneris worked a half-mile in :48.60 with splits of :12.40 and :24.40. Andthewinneris is a candidate for the $1 million Breeders’ Cup Juvenile Turf (G1) that will close Future Stars Friday on Nov. 4.

Belladonna Racing’s Coastana and Pocket Aces Racing and Somewhere Stable Kentucky’s Temple City Terror, who have been facing the likes of standout grass marathoner War Like Goddess, head a field of 11 fillies and mares entered Thursday for Sunday’s 31strunning of the $300,000 Rood & Riddle Dowager (G3) going 1½ miles on the turf.

The Rood & Riddle Dowager will go as the seventh race Sunday afternoon with a 4:12 p.m. post time. First post for the nine-race program is 1 p.m.

Trained by Cherie DeVaux, Coastana finished third just behind winner Virginia Joy (GER) and War Like Goddess in the Flower Bowl (G2) at Saratoga in September and in her most recent start was third in the Waya (G3) over yielding turf at the Belmont at the Big A meet. Adam Beschizza has the mount Sunday and will break from post one.

Trained by Brendan Walsh, Temple City Terror exits a fourth-place finish in the Flower Bowl in which she finished a little more than a length behind War Like Goddess. Prior to that, she had a runner-up finish by the same margin to winner War Like Goddess in the Glens Falls (G2).

Tyler Gaffalione has the mount on Temple City Terror and will break from post position five.

Keeneland Library Exhibit “Breeders’ Cup at Keeneland.” Enjoy photographs from the memorable 2015 and 2020 runnings of the Breeders’ Cup World Championships at Keeneland along with artifacts from Breeders’ Cup Ltd. and mementos of fan favorites American Pharoah and Zenyatta. The Library is free and open to the public Monday through Friday from 8:30 a.m. to 4:30 p.m.

The Hill. No ticket or reservation is required for Keeneland’s popular free tailgating area, which is open Fridays and Saturdays and offers a unique way to experience the races. Fans on The Hill can participate in the racing action via a jumbo TV and wagering, while food trucks and live music presented by The Burl create a festive atmosphere. Those who wish to elevate their tailgating experience can book a premium package that includes tent, tables, amenities, reserved area for the day and more with REVELxp, the official tent partner for organized tailgates. Visit Keeneland.com/tailgating for details.

Sunrise Trackside. This free morning program is geared toward families and offers a unique view of Thoroughbreds during training hours. Children’s activities from 8-10 a.m. include a meet and greet with Keeneland’s mascot, Buckles, along with face painting, games and more. Fans can enjoy coffee and donuts at The Starting Gate concessions while watching horses train. Mini tours are available at the Welcome Stand near the Paddock. A 30-minute Paddock demonstration with cartoonist Remi Bellocq along with a horse for patrons to pet begins at 8:30 a.m. Sunrise Trackside is open to the public and does not require a ticket to attend.

Heroes Day Presented by Rubicon. Heroes Day honors members of the military (active duty and veterans) and first responders (law enforcement, firefighters, EMTs and health care workers) and their families with free general admission and access to reserved Grandstand seats. The Family Zone will offer free lunch provided by City BBQ and children’s activities for those families in the North Terrace from 11 a.m. to 3 p.m. Keeneland will showcase a POW-MIA Chair of Honor to bring awareness to past and current POW-MIA military members through a partnership with The Rolling Thunder Kentucky Chapter 5. Heroes Day also will feature a flag unfurling on the main track between races, and local heroes will be recognized in the Winner’s Circle throughout the afternoon.