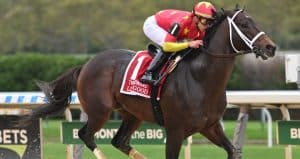 A day after working many of his 2-year-olds expected for the Nov. 4 Future Stars Friday races during the Breeders’ Cup World Championships at Keeneland, trainer Todd Pletcher on Friday breezed his older horses – led by multiple Grade 1 winner Life Is Good, champion Malathaat and Grade 1 winner Nest – who are scheduled to compete in the Breeders’ Cup on Nov. 5.

Shortly after the second renovation break ended at 9 a.m., CHC Inc. and WinStar Farm’s $6 million Breeders’ Cup Classic (G1) candidate Life Is Good breezed 5 furlongs on a fast track in 1:00.40 for his first work since scoring a victory in the Oct. 1 Woodward (G1) at Belmont at the Big A. Life Is Good won last year’s Big Ass Fans Breeders’ Cup Dirt Mile (G1) at Del Mar.

“Super,” Pletcher said of Life Is Good’s work. “Pretty much what we have come to expect from him. He just does everything so effortlessly. He doesn’t look like he is doing anything, but you look at your watch and he comes home in :23 and change.”

“We were just looking for more of the same,” Pletcher said. “They are two terrific fillies – kind workhorses and straightforward. It was just a maintenance half-mile with both of them coming off races 12 days ago with a target 15 days from now. Looks like they are holding their form great. Both seem to love the track again this morning.”

Both fillies won Oct. 9 with Malathaat taking the Juddmonte Spinster (G1) at Keeneland by 5¼ lengths and Nest capturing the Beldame (G2) at Belmont at the Big A by 9¾ lengths. The two are both being pointed at the $2 million Breeders’ Cup Distaff (G1).

For Pletcher, Wertheimer and Frere’s Happy Saver, a possible starter in the Classic, covered a half-mile in :48.40 in company with Never Change. (Click here for a video of the work.)

“It was a workman-like breeze for him, which is his usual style,” Pletcher said. “I had him finishing up good and it looked like he was happy.”

Completing the morning activity for Pletcher were grass works turned in by Bass Racing’s Annapolis and Spendthrift Farm’s Major Dude.

Working in company, Coolmore Turf Mile (G1) winner Annapolis and Pilgrim (G2) winner Major Dude were clocked a half-mile in :47.80. (Click here for a video of the work.)

Pletcher was pleased with the works and indicated both would come back next week and work on the grass, Annapolis for the $2 million FanDuel Breeders’ Cup Mile (G1) on Nov. 5 and Major Dude for the $1 million Breeders’ Cup Juvenile Turf (G1) on Nov. 4.

Stonestreet Stables’ Campanelle (IRE) continued working toward an expected start in the $1 million Breeders’ Cup Turf Sprint (G1) here on Nov. 5 by working 5 furlongs in 1:01.40 on her own over a firm course Friday morning. (Click here for a video of the work.)

“That was a good work,” trainer Wesley Ward said of Campanelle, who was fourth here in the 2020 Breeders’ Cup Juvenile Fillies Turf (G1) in her previous start in the World Championships.

The highweighted 2-year-old filly in England and France in 2020 when she won the Queen Mary (G2) at Royal Ascot in England and the Darley Prix Morny (G1) at Deauville in France, Campanelle worked for the third time since taking the Mint Ladies Sprint (G3) at Kentucky Downs going 6½ furlongs on Sept. 10.

Another Breeders’ Cup candidate for Ward is multiple graded stakes winner Kimari. Ward is looking at the 6-furlong Sprint (G1) against males or the 7-furlong Filly and Mare Sprint (G1).

The deadline for pre-entries for the Breeders’ Cup is noon ET on Monday.

Working later for D. J. Stable and Casse was Nownownow Stakes winner Webslinger, who breezed a half-mile on the turf in :48.60 in preparation for a likely engagement in the $1 million Breeders’ Cup Juvenile Turf (G1) on Nov. 4. …

Also working on the turf was Augustin Stable’s Delight for trainer Jonathan Thomas.

Winner of the JPMorgan Chase Jessamine (G2) here on Oct. 7, Delight worked a half-mile in company in :50.40 as she prepared for an expected start in the $1 million Breeders’ Cup Juvenile Fillies Turf (G1) on Nov. 4. (Click here for a video of the work.)

“That was a good piece of work,” Thomas said. “The filly that worked inside of her (stakes winner Born Dapper) is no slouch. I was very pleased with it. We’ll take it.” …

Working on the dirt for trainer Chad Brown was Klaravich Stables’ Free Look, runner-up in the Miss Grillo (G2) in her most recent start. Working in company with multiple graded stakes winner Dolce Zel (FR), Free Look covered a half-mile in :49.20. Free Look also is a candidate for the Breeders’ Cup Juvenile Fillies Turf.

A couple of rivals that Pocket Aces Racing and Somewhere Stable Kentucky’s Temple City Terror has faced recently will be absent Sunday when she starts in the 31st running of the $300,000 Rood & Riddle Dowager (G3) going 1½ miles on the grass.

War Like Goddess, who finished ahead of Temple City Terror in the Glens Falls (G2) and Flower Bowl (G2), is headed for the $4 million Breeders’ Cup Turf (G1); Virginia Joy (GER), winner of the Flower Bowl, is most likely headed for the $2 million Maker’s Mark Filly & Mare Turf (G1).

“She beat Virginia Joy in the Glens Falls,” trainer Brendan Walsh said. “There was talk (Virginia Joy) was going to run here (in the Rood & Riddle Dowager), and it doesn’t hurt me that she’s not.”

“It took her 10 times to break her maiden, but once she got that out of the way, she moved forward by leaps and bounds,” Walsh said.

A winner of two stakes and three times graded stakes-placed, Temple City Terror will be seeking that elusive initial graded victory. She has done her best running on firm ground, a condition that should greet her Sunday.

“She likes this course, and she has run well on it in the past,” Walsh said. “She is doing very good right now.”

Temple City Terror is cataloged to Keeneland’s November Breeding Stock Sale as a racing or broodmare prospect. Consigned by Brookdale Sales, agent for Pocket Aces Racing, she is Hip 197.

Keeneland Library Exhibit “Breeders’ Cup at Keeneland.” Enjoy photographs from the memorable 2015 and 2020 runnings of the Breeders’ Cup World Championships at Keeneland along with artifacts from Breeders’ Cup Ltd. and mementos of fan favorites American Pharoah and Zenyatta. The Library is free and open to the public Monday through Friday from 8:30 a.m. to 4:30 p.m.

The Hill. No ticket or reservation is required for Keeneland’s popular free tailgating area, which is open Fridays and Saturdays and offers a unique way to experience the races. Fans on The Hill can participate in the racing action via a jumbo TV and wagering, while food trucks and live music presented by The Burl create a festive atmosphere. Those who wish to elevate their tailgating experience can book a premium package that includes tent, tables, amenities, reserved area for the day and more with REVELxp, the official tent partner for organized tailgates. Visit Keeneland.com/tailgating for details.

Sunrise Trackside. This free morning program is geared toward families and offers a unique view of Thoroughbreds during training hours. Children’s activities from 8-10 a.m. include a meet and greet with Keeneland’s mascot, Buckles, along with face painting, games and more. Fans can enjoy coffee and donuts at The Starting Gate concessions while watching horses train. Mini tours are available at the Welcome Stand near the Paddock. A 30-minute Paddock demonstration with cartoonist Remi Bellocq along with a horse for patrons to pet begins at 8:30 a.m. Sunrise Trackside is open to the public and does not require a ticket to attend.

Heroes Day Presented by Rubicon. Heroes Day honors members of the military (active duty and veterans) and first responders (law enforcement, firefighters, EMTs and health care workers) and their families with free general admission and access to reserved Grandstand seats. The Family Zone will offer free lunch provided by City BBQ and children’s activities for those families in the North Terrace from 11 a.m. to 3 p.m. Keeneland will showcase a POW-MIA Chair of Honor to bring awareness to past and current POW-MIA military members through a partnership with The Rolling Thunder Kentucky Chapter 5. Heroes Day also will feature a flag unfurling on the main track between races, and local heroes will be recognized in the Winner’s Circle throughout the afternoon.

Florent Geroux and John Velazquez have 8 wins each.

Brad Cox, Kenny McPeek and Wesley Ward have 5 wins each.

The Pressbox13 hours ago
New post added at The Pressbox - McLean's Selections for Turfway Park on Friday, Jan. 27

The Pressbox16 hours ago
New post added at The Pressbox - Work Tab for Thursday, Jan. 26: Binoculars Focused On Elite Power, Teena Ella & Other "Horses to Watch"