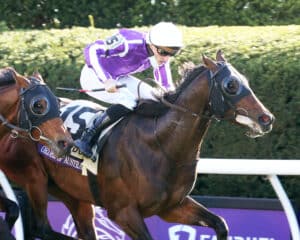 Defending FanDuel Breeders’ Cup Mile (G1) Presented by PDJF winner Order of Australia (IRE) returns to Keeneland Saturday as the headliner in a field of 13 in the 36th running of the $750,000 Keeneland Turf Mile (G1).

In addition to the Keeneland Turf Mile, which is a “Win and You’re In” race for the FanDuel Breeders’ Cup Mile Presented by PDJF at Del Mar on Nov. 6, Saturday’s 11-race program will offer two other Grade 1 tests: the 108thrunning of the Claiborne Breeders’ Futurity for 2-year-olds going 1 1/16 miles on the main track and the 24th running of the $400,000 First Lady Presented by UK HealthCare for fillies and mares going a mile on the turf.

Order of Australia has won one of five starts in 2021 and enters the Keeneland Turf Mile off a runner-up finish in the Prix du Moulin (G1) at Longchamp in September. John Velazquez has the mount Saturday and will exit post 10.

One of the horses chasing Order of Australia in last year’s Breeders’ Cup Mile was Ivar (BRZ), who will seek to become only the third horse to win the Turf Mile in consecutive years.

Trained by Paulo Lobo, Ivar finished fourth, 2 lengths behind Order of Australia, in the Breeders’ Cup. In Ivar’s lone 2021 start, he was sixth, beaten 2 lengths in the Turf Classic (G1) at Churchill in May.

Joe Talamo has the mount Saturday from post position six.

Slated as the ninth race with a 5:15 p.m. post time, the Claiborne Breeders’ Futurity is a “Win and You’re In” race for the $2 million TVG Breeders’ Cup Juvenile (G1) Presented by Thoroughbred Aftercare Alliance to be run Nov. 5 at Del Mar.

Stellar Tap already has earned a spot in racing history. When he won at first asking Aug. 7 at Saratoga, he became the 9,446th winner for trainer Steve Asmussen to make him the all-time leading conditioner in North America surpassing the late Dale Baird.

In his most recent start, Stellar Tap finished fifth as the favorite in the Iroquois (G3) at Churchill going 1 1/16 miles. Ricardo Santana Jr. has the mount from post position three.

Kevin’s Folly also won at first asking at Saratoga and followed that with a third-place finish in the Hopeful (G1) for trainer Tom Amoss. Kevin’s Folly got a feel for the Keeneland surface Oct. 2 by working 5 furlongs in :59.40.

He will be ridden Saturday by Flavien Prat out of post position 12.

Godolphin’s Althiqa (GB), already a two-time Grade 1 winner in the U.S. in two attempts, headlines a talented field of 13 fillies and mares entered Wednesday for the First Lady (G1) Presented by UK HealthCare.

Scheduled as Saturday’s eighth race with a 4:44 p.m. post time, the First Lady is a “Win and You’re In” race for the $2 million Maker’s Mark Breeders’ Cup Filly and Mare Turf (G1) at Del Mar on Nov. 6.

Trained by Charles Appleby, Althiqa already was multiple group-placed in Europe as well as a Group 2 winner in the United Arab Emirates before coming to North America, where she took the Just a Game (G1) at Belmont in June and the Diana (G1) in July at Saratoga.

Althiqa will be ridden Saturday by Jamie Spencer and exit post three.

She will have to contend with another European invader in the Aidan O’Brien-trained Empress Josephine (IRE).

Owned by Mrs. John Magnier, Michael Tabor and Derrick Smith, Empress Josephine has made her past four starts in Group 1 company and won the Tattersalls Irish One Thousand Guineas. John Velazquez has the mount Saturday from post position two.

Trained by Bill Mott, Harvey’s Lil Goil won the Queen Elizabeth II Challenge Cup (G1) Presented by Dixiana here last fall and followed that with a third-place finish in the Maker’s Mark Breeders’ Cup Filly and Mare Turf in which she was defeated by a neck.

A winner in one of four starts in 2021, Harvey’s Lil Goil will be ridden by Junior Alvarado from post position eight.

Princess Grace, a four-time graded stakes winner, has won six of seven career starts for trainer Mike Stidham and enters the First Lady Presented by UK HealthCare off a victory in the Kentucky Downs Ladies Turf (G3) on Sept. 11.

Kent Desormeaux has the mount on Princess Grace, who will start from post position 10.

Trainer Chad Brown, who has saddled the past three First Lady winners and four overall, will be represented by three runners: Juddmonte’s Viadera (GB) and Peter Brant’s Regal Glory and Blowout (GB).

Viadera, a three-time graded stakes winner in the U.S., comes into Saturday’s race off a victory in the Ballston Spa (G2) at Saratoga. Florent Geroux has the mount Saturday and will leave post position 13.

Blowout, who figures to be the pacesetter, is one for two in 2021 with the victory coming in the Distaff Turf Mile (G2) at Churchill on May 1. She was fourth in the Fourstardave (G1) against males at Saratoga. Blowout will start from post position nine and be ridden by Flavien Prat.