Keeneland Barn Notes: Pickin’ Time May Be Ripe For Victory

Keeneland Barn Notes: Pickin’ Time May Be Ripe For Victory 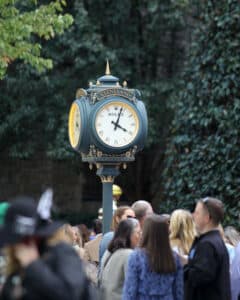 Saturday’s 13th running of the $150,000 Perryville for 3-year-olds going 7 furlongs attracted nine runners with one omission to the delight of trainer Kelly Breen.

A New Jersey-bred son of Stay Thirsty owned by breeder John Bowers Jr. (Roseland Farm Stable), Pickin’ Time is back sprinting after chasing heavyweights such as Hot Rod Charlie and Mandaloun in the Haskell (G1) in July.

“Mr. Bowers ran a horse in the Haskell 21 years ago (Thistyranthasclass, who finished fifth) and didn’t think he would have another one,” Breen said. “He asked me to run, and I couldn’t deny him the opportunity.”

Pickin’ Time won two stakes as a 2-year-old, including the Nashua (G3) going a mile. Following a fourth-place finish in the Mucho Macho Man (L) at Gulfstream on Jan. 2, he received nearly a five-month vacation.

“His first race back (in the Jersey Derby), the race came off the grass and I thought it would be easier on him, but he was never comfortable and then he got thrown to the wolves (in the Haskell),” Breen said. “Since he went back to sprinting he has a win (in a state-bred stakes at Monmouth) and the nice effort to finish second to Jackie’s Warrior.

“I think he can go longer. This is a nice middle-distance race to build his confidence to get him going longer.”

Pickin’ Time is among the five horses Breen has at Keeneland. One of them, Persisto, runs in this afternoon’s third race. Breen also trains Edge Racing’s Yes This Time, a Grade 3 winner pointing to the $150,000 Bryan Station going a mile on the turf on Oct. 30. 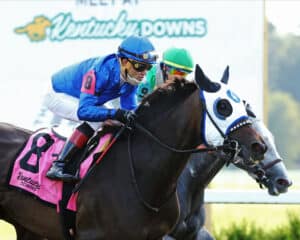 Godolphin’s Micheline, runner-up in the 2020 Queen Elizabeth II Challenge Cup (G1) Presented by Dixiana, is coming to Keeneland for another try over the turf course. The 4-year-old daughter of Bernardini out of 2007 Juddmonte Spinster (G1) winner Panty Raid is among the 10 fillies and mares entered for Sunday’s $150,000 Rood & Riddle Dowager (G3).

Once again Micheline will have her special accommodations – a traveling stall of wood-lined farm gates with a fitted tarp for a ceiling – that is set up outside trainer Mike Stidham’s barn. During her early training in Florida, Micheline was so claustrophobic that she was turned out in a paddock instead of residing in the barn. Before she relocated to Stidham’s base at Fair Hill training center in Maryland, an outdoor stall was built.

“Whenever she leaves Fair Hill, her portable stall goes with her,” Stidham said. “She is happy and comfortable in that.”

The unique stabling is undeniably a success as Micheline has won five of 17 starts and earned $680,103. Except for her unplaced effort in Keeneland’s Darley Alcibiades (G1) in 2019, Micheline has raced exclusively on turf.

In addition to being picky about her stabling, Micheline prefers a specific grass footing that is not too soft. In her most recent effort, she was a close sixth in the Kentucky Downs Ladies Marathon (L) last month but encountered slight interference in the race that compromised her chances.

“It all has to do with the race track,” Stidham said. “As long as the grass is firm, she will run her ‘A’ race. She tried to do that at Kentucky Downs but everywhere she went through the stretch, she got stopped and had nowhere to go. And she only got beat a couple of lengths.”

Florent Geroux, who rode her in the Queen Elizabeth II Presented by Dixiana, is back on board from post position six in the Rood & Riddle Dowager. 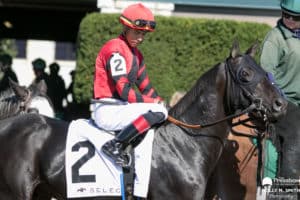 DARRS Inc.’s Extravagant Kid worked a half-mile in :49.40 in his final Keeneland work before an expected start in the $1 million Breeders’ Cup Turf Sprint (G1) on Nov. 6.

Fourth in the Breeders’ Cup Turf Sprint here last fall, Extravagant Kid is scheduled to leave Saturday morning for Indianapolis and a FedEx flight to California.

Working right after Extravagant Kid was Spinaway (G1) runner-up Tarabi, who breezed 5 furlongs in company in 1:00.20. Owned by LBD Stable, Manganaro Bloodstock and David Ingordo, Tarabi is under consideration for the $2 million Breeders’ Cup Juvenile Fillies (G1) to be run Nov. 5.

Keeneland Racing Analyst Tom Leach talks to trainer Mac Robertson about Two Emmys in today’s Sycamore (G3). He talks to Mark Casse about the trainer’s horses in Keeneland’s two Saturday stakes: Soup and Sandwich in the Perryville and Souper Sensational and Miss Speedy in the Lexus Raven Run (G2).

The Hill. At this popular tailgating area, fans can watch and wager while enjoying the racing action from the Jumbotron and wagering tent, while food trucks and live music presented by The Burl create a festive atmosphere. No ticket or reservation is required for The Hill. Parking opens at 10 a.m. Live music and food trucks from noon to 4 p.m.

Sunrise Trackside. This free Saturday morning program is geared toward families and offers a unique view of Thoroughbreds during training hours. Children’s activities from 8-10 a.m. include a meet and greet with Keeneland mascot Buckles, along with face painting, games and more. Fans can purchase coffee and donuts while watching horses train. The Keeneland Track Kitchen at the east end of the stable area (with no track view) is open for breakfast that includes “grab and go” and seating options. A 30-minute Paddock demonstration by the Kentucky Horseshoeing Schoolof Richmond, Kentucky, begins at 8:30 a.m. Mini tours of Keeneland are available at the Welcome Stand in the Paddock.

Heroes Day Presented by Rubicon. This event honors members of the military (active duty and veterans) and first responders (law enforcement, firefighters, EMTs and health care workers) and their families with free general admission and access to reserved Grandstand seats. The Family Zone will offer free lunch provided by City BBQ and children’s activities for those families in the North Terrace from noon to 4 p.m. Keeneland will showcase a POW-MIA Chair of Honor in the Paddock. This program brings awareness to past and current POW-MIA military members through a partnership with The Rolling Thunder Kentucky Chapter 5. Heroes Day also will feature a spectacular flag unfurling on the main track between races.