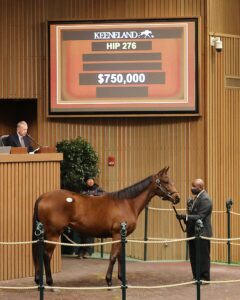 Keeneland’s January Horses of All Ages Sale concluded today after four days of competitive trade that yielded solid results, headlined by the sales of Princesse Lele for $750,000 and the promising 3-year-old colt Belgrade for $700,000, and signaled continued confidence in the Thoroughbred industry. Gross sales of $46 million were the second-highest for the sale since 2008.

The start of the January Sale was delayed by one day because of a snowstorm late last week that created hazardous travel and shipping conditions in Kentucky. The auction, which began Tuesday, produced total sales of $46,341,100 for 1,013 horses in the ring, an increase of 1.8 percent over last year when 963 horses grossed $45,522,100. Last year’s totals reflect two prominent dispersals – Estate of Paul Pompa Jr. and Sam-Son Farm – that combined to produce sales of more than $13.5 million.

“The January Sale continued the momentum of last fall’s September Yearling and November Breeding Stock Sales,” Keeneland President and CEO Shannon Arvin said. “We appreciate the cooperation of our sellers and buyers when the weather forced us to adjust the sales schedule a bit to keep our horses and people safe, and ensure consignors had ample time to show horses. But the delayed start didn’t dampen the enthusiasm to invest in Thoroughbreds and to participate in this incredible industry.”

“We are very, very pleased with the sale,” Lacy said. “Continued competitive trade, high clearance rate and high median price have solidified some confidence in people who were nervous before the beginning of the sales season. They feel positive about moving forward into the rest of 2022 and are investing as such. The market is very broad in all respects; you’re not seeing the spikes and valleys indicative of a narrow market. Demand is strong, with multiple bidders on horses at all levels, but not overheated. Prices, even the higher ones, are fair, believable and sustainable.”

Similar to the trend of September and November, the January Sale clearance rate was 80 percent, evidence of robust trade and a deep buying bench. Domestic buying power once again proved exceptionally strong and was enhanced by active participation from foreign buyers representing 16 countries such as Ireland, Mexico, Saudi Arabia and South Korea. The 15 highest-priced horses sold to 13 different buyers.

“The high clearance rate continued through the middle and even lower end of the market, and that is really encouraging because this isn’t a barometer sale like September and November,” Keeneland Director of Sales Operations CormacBreathnach said. “This is a new tax year and yet there’s the same hunger to buy horses where there hasn’t been for years. That’s a really good sign.”

Carl and Yurie Pascarella paid $700,000 for the 3-year-old Hard Spun colt Belgrade, who opened his career in December with a 6-length maiden special weight victory at Fair Grounds. Consigned by Four Star Sales, agent, Belgrade is from the family of Grade 3 winners Medal Count and Garden District. He will be trained by Graham Motion.

Belgrade was one of a limited number of horses supplemented to the January Sale. Supplemental entries give Keeneland the flexibility to accommodate race fillies and broodmare prospects, as well as exciting young horses of racing age, many of whom come to hand quickly.

“The quality of the catalog was very strong when it initially came together, but the ability to add a small number of supplements, such as Belgrade, who sold so successfully for Randy and Sandy Bradshaw, was very rewarding,” Breathnach said.

“Comparable horses have been selling well compared with previous years,” Cauthen said. “Generally, when you bring a horse to January, you intend to sell. The number of horses not sold on Thursday was incredibly low (13.09 percent). That means people are buying, and that is the name of the game.”

Cypress Creek paid the amount for the 10-year-old Susie’s Baby, a stakes-producing daughter of Giant’s Causeway who is a half-sister to Irish highweight Caravaggio and is in foal to Constitution. In 2021, her daughter Family Way won the Kentucky Downs Ladies Marathon.

Peter Blum spent $600,000 on Co Cola, an 11-year-old daughter of Candy Ride (ARG) who is in foal to Flatter with a full sibling to 2021 Grade 1 winner Search Results. Consigned by James B. Keogh (Grovendale), agent, Co Cola is from the family of Canadian champion Kimchi.

“It is a very healthy January market,” Keogh said. “It is a vibrant market. You look around and see the volume of people in attendance. The main thing is that we are selling and moving horses along to generate cash for their owners. That is always a good thing.”

Narvick International paid $500,000 for Bella Vita, a 5-year-old stakes-winning daughter of Bayern who was second in the Dec. 4 Go for Wand (G3) at Aqueduct, and $375,000 for the sale’s top-priced yearling, a colt by Gun Runner.

Hunter Valley Farm, agent, consigned the Gun Runner colt, whose dam is the winning Empire Maker mare Take a Memo. He is from the family of Grade 2 winners Memorette and Gervinho.

The yearling sold during the opening session, which concluded with the auction of a 2022 no-guarantee season to Gun Runner donated by the stallion’s owners, Three Chimneys and Ron Winchell, to raise funds for relief and recovery efforts from last month’s tornado devastation in Western Kentucky. Gun Runner, who stands at Three Chimneys, led all first-crop sires in 2021.

“This was such a generous gesture by Ron Winchell and Three Chimneys, and Keeneland was very pleased to have been able to facilitate the sale of the Gun Runner season,” Lacy said.

Highlighting the third day of the January Sale was the $480,000 sale of Crowning Jewel, a half-sister to champion and Kentucky Derby (G1) winner Street Sense in foal to Street Boss, to Frank Stronach’s Adena Springs. The amount paid for the 5-year-old daughter of Into Mischief is the highest price recorded on Day 3 of the January Sale since 2005.

“It’s hard to buy the good stuff, very competitive – a carryover from the November Sale,” said Dan Hall after he signed the ticket for Crowning Jewel.

Taylor Made Sales Agency, agent, led consignors by selling 122 horses for $5,696,800. At $470,000, the top price for a Taylor Made horse was paid for Remedy, a 7-year-old mare by Creative Cause from the family of champion Beholder, leading sire Into Mischief and young stallion Mendelssohn. Three Chimneys and Whisper Hill Farm were the buyers.

“Keeneland thanks all the consignors and buyers who participated in the January Sale and wishes everyone good luck during the upcoming breeding season,” Arvin said.

Action at Keeneland will return Friday, April 8, opening day of the 15-day Spring Meet. The season will award a record $7.7 million in purses for 19 stakes led by the $1 million Toyota Blue Grass (G2) for 3-year-olds on Saturday, April 9.

Sign Up
The Pressbox · 34 minutes ago
@thepressboxlts
May I please get 2 followers to COPY and re-post this tweet?