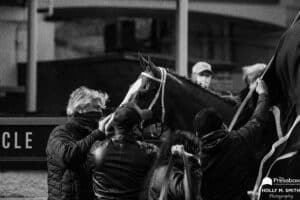 A talented trio of runners from the barn of trainer Steve Asmussen began the Keeneland portion of their preparation for the 39thBreeders’ Cup World Championships here Nov. 4-5 by working easy half-miles on their own early Sunday morning over a fast track.

First was J. Kirk and Judy Robison’s champion Jackie’s Warrior, who covered the distance in :49.80 with exercise rider Wilson Fabian aboard. A five-time Grade 1 winner, the 4-year-old Jackie’s Warrior is considered the probable favorite for the $2 million Qatar Racing Breeders’ Cup Sprint (G1).

In Asmussen’s next set, Fabian was aboard Winchell Thoroughbreds’ Runhappy Travers (G1) winner Epicenter, who completed the half-mile in :51. Epicenter, one of the leading contenders for champion 3-year-old male honors, is being pointed to the $6 million Breeders’ Cup Classic (G1).

In the same set, Stonestreet Stables’ two-time Grade 1 winner Clairiere worked a half-mile in :49.80 with exercise rider Carmen Rosas aboard. One of the leading contenders for the Eclipse Award as champion older dirt female, the 4-year-old Clairiere is being pointed to the $2 million Breeders’ Cup Distaff (G1).

The three runners have accounted for 19 graded stakes victories – eight of them Grade 1s – in their careers for combined earnings of more than $7.6 million.

“He looks phenomenal this morning,” trainer Doug O’Neill said via text before returning to his Southern California base.

Hot Rod Charlie, who finished second as a 94-1 shot in the 2020 TVG Breeders’ Cup Juvenile (G1) Presented by Thoroughbred Aftercare Alliance here in his lone Keeneland start, is being pointed to the $6 million Breeders’ Cup Classic (G1), a race in which he finished fourth last year.

Also working this morning for trainer Steve Asmussen was Courtlandt Farms’ Powerful. A maiden winner at Saratoga, Powerful covered a half-mile in :51.60 in preparation for Saturday’s $600,000 Claiborne Breeders’ Futurity (G1).

With five days to go until the opening of Keeneland’s 17-day Fall Meet, fields are taking shape for the Oct. 7-9 Fall Stars Weekend, which will offer 11 stakes worth $5.45 million.

Nine of the races are Breeders’ Cup Challenge tests (*) that award the winners fees-paid berths into corresponding races at the 39thWorld Championships, which will be held Nov. 4-5 at Keeneland.

According to Keeneland Stakes Coordinator Allison De Luca, here are the possible starters for the stakes: