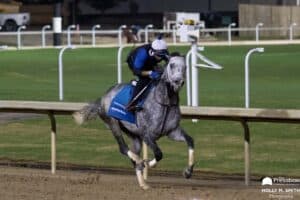 Fifty-three graduates of Keeneland sales – led by Knicks Go, the 5-2 morning-line favorite for the $6 million Breeders’ Cup Classic (G1) – along with 32 horses who raced or trained here during the recent Fall Meet have been entered in the 38th Breeders’ Cup World Championships, to be held Friday and Saturday at Del Mar.

The winners of 57 Breeders’ Cup races made their final starts or turned in their final works before the event during Keeneland’s Fall Meet.

This year, 32 horses that raced or trained at Keeneland during the Fall Meet are entered in Breeders’ Cup races. They include the winners of eight of Keeneland’s 10 Breeders’ Cup Challenge “Win and You’re In” races:

In addition, Keeneland racing has a connection to Essential Quality, the 3-1 second choice in the Classic. Essential Quality has won three stakes at Keeneland: 2020 Claiborne Breeders’ Futurity and Breeders’ Cup Juvenile and this year’s Toyota Blue Grass (G2).