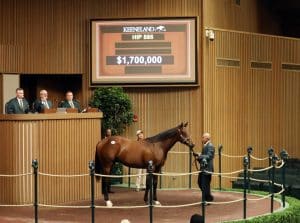 A colt by Quality Road sold for $1.7 million and a son of Gun Runner brought $1.2 million during Thursday’s session of the Keeneland September Yearling Sale, which recorded a fourth consecutive day of spirited trade and strong results. Today’s session marked the final day of a vibrant Week 1 of the auction, which produced gross sales of nearly $237 million and the sale of 30 horses for $1 million and more.

For the second consecutive year, Week 1 featured Books 1 and 2 during the first four days, when more than 1,100 horses, among the sale’s finest individuals based on pedigree and conformation, were cataloged. The format was designed to offer the largest number of exceptional horses possible to major domestic and foreign buyers before the sale takes a one-day break on Friday, Sept. 16.

“Today was competitive and energetic,” Keeneland Vice President of Sales Tony Lacy said. “This session last year was extremely strong so the fact that we ticked up a slight bit is very encouraging. The RNA rate (28 percent) was a little higher than we’d like. Buyers might have rushed on to Book 3 in some cases and overlooked a few quality individuals. But I know a lot of sellers were very, very happy today.”

“It’s been an excellent Week 1,” Keeneland Director of Sales Operations Cormac Breathnach said. “We had a 10 percent bump in average and median over what was an exciting Week 1 last year. The RNA rate for this week is 25 percent versus 30 percent last year. So everything is trending in the right direction. We feel a sense of gratefulness to the breeders because they really supported us and what we’re trying to do. Seeing these results gives us the energy to continue improving.”

“We turn the page now and head into Book 3,” Lacy added. “Activity in the barns is very strong, and the middle market I would predict to be as healthy as it was last year.”

Donato Lanni, agent, signed the ticket for the session’s $1.7 million high seller, a colt by Quality Road from the family of Grade 1 winner Joking and Grade 2 winners and sires Tale of the Cat and Fed Biz. Consigned by Nardelli Sales, agent, he is out of the winning Street Sense mare Act Now.

The price equals the third highest price of Week 1.

“He’s a lovely horse we bred and raised,” Rodney Nardelli said. “He’s got everything. He’s beautiful. He’s been nice all his life. We’re appreciative of Keeneland’s (September Sale) format and the support of the buyers. Most of the major players were on him.”

Lanni said the colt will go to trainer Bob Baffert.

“He loved him, we all loved him,” Lanni said. “Everyone was waiting for him to walk into the Pavilion. He is a beautiful horse. Super athletic, pretty laid back. A fast-looking Quality Road and made really well; he is the kind you want to take home. This has been a great sale. (The price) is what I figured was going to happen. (This client) is always game to play at this level. Bob did such a good job with (champion) Corniche (by Quality Road). This horse kind of reminded us a lot of him.”

Mike Ryan, agent, paid $1.2 million for a colt by Gun Runner out of Grade 1 winner Malibu Prayer, by Malibu Moon. Four Star Sales, agent, consigned the colt, who is from the family of Grade 1 winner Swagger Jack and Grade 2 winners Valid and Tap Dance.

“He reminded me quite a bit of (2022 Preakness-G1 winner) Early Voting,” Ryan said. “He’s a big, imposing horse that moved like a cheetah. And I said to Chad, ‘Can you imagine Flavien Prat or Irad Ortiz on his back right now?’ He was a magnificent horse, a lot of class, a lot of quality. Bred to get a mile and an eighth or a mile and a quarter. Look at the page: It’s the best of Spring Hill Farm, Ned Evans, and Three Chimneys raises a great horse. And what more can you say about the stallion?”

“That was awesome,” Four Stars Managing Partner Kerry Cauthen said. “We knew we had a lot of activity on this horse. He is a great individual. The reserve was less than half (his sale price). That is the whole point of coming to an auction. You have a chance for people to fight it out. That is what makes an auction.

“He always was a good physical,” Cauthen added, “but at the time of placement for the catalog, he seemed like a Book 2 horse. But he improved, and that changed the whole dynamic. You don’t have a crystal ball when you are four months out from the auction when you are placing the horse (in the sale).”

A filly by Gun Runner out of Grade 2 winner Stonetastic, by Mizzen Mast, sold to Mayberry Farm for $925,000. Consigned by Paramount Sales, agent, she is from the family of Grade/Group 1 winners Gift Box and Our New Recruit.

“I love Mizzen Mast broodmares, I love Stonetastic,” David Ingordo, who signed the ticket, said. “This filly is by Gun Runner; she is the proverbial whole package. She cost a lot of money, but she is a long-term asset. This client is building a broodmare band, and this filly fits all the parameters. She looks like an athlete and she has pedigree.”

“She is a gorgeous filly out of a beautiful mare,” Paramount’s Pat Costello said. “She has that speedy look to her. She made what she was supposed to bring. Since she arrived at the sale, she has been spectacular.”

Donato Lanni, agent for SF/Starlight/Madaket, paid $700,000 for a son of Uncle Mo out of Grade 1-placed winner Still There, by Union Rags. Taylor Made Sales Agency, agent, consigned the colt, who is from the family of Grade 3 winner Raging Daoust.

A colt by Liam’s Map consigned by Hinkle Farms sold for the amount to Michael Wallace, agent for St. Elias Stables. Out of the winning Speightstown mare Giulio’s Jewel, he is from the family of Group 2 winner Rabbit Run and Grade/Group 3 winners Bertolini, Rainha Da Bateria, Assateague and Kindergarden Kid.

Tomoyasu Sakaguchi paid $625,000 for a colt by City of Light who is a half-brother to Grade 2 winner Spielberg. From the family of Grade 1 winners Dream Deal, Clear Mandate, Strong Mandate and Romantic Vision, he was consigned by Warrendale Sales, agent. His dam is Miss Squeal, a winning daughter of Smart Strike.

A colt by Uncle Mo who is a half-brother to stakes winner Bet She Wins was purchased for the amount by West Bloodstock. St George Sales, agent, consigned the colt, who is out of Spring Eclipse, by Unbridled’s Song, and from the family of Grade 2 winners Softly and Conquest Big E.

Also selling for $600,000 was a Medaglia d’Oro colt out of Grade 3 winner Valadorna, by Curlin, acquired by Jupiter Farm. Consigned by Taylor Made Sales Agency, agent, he is from the family of Grade 1 winner Complexity and Grade 2 winners Springside and Real Cash.

Repole Stable and St. Elias Stables paid the same amount for a colt by Constitution out of the stakes-winning Street Sense mare Walk of Stars. Betz Thoroughbreds, agent, consigned the colt, who is from the family of stakes winners Strike the Moon and Never Enough Time.

“One of our goals has been to build a catalog that attracts principals to come to the sale,” Breathnach said. “Having Mike Repole and his team here has really given the sale a lift and created a lot of buzz in the Sale Pavilion.”

The fourth $600,000 yearling was a son of Munnings who sold to West Bloodstsock, agent for Robert and Lawana Low. Ashview Farm (Bryan Lyster and Gray Lyster) agent, consigned the colt, who is out of West Riding, by Tapit, and from the family of Grade 1 winner A. P. Indian.