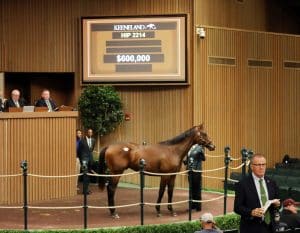 The session was headlined by the sale of a colt by Candy Ride (ARG) from the family of Grade 1 winner McKinzie for $600,000 to Talla Racing, Kim Lloyd, agent.

Donato Lanni, agent for SF/Starlight/Madaket, paid $485,000 for a colt by Arrogate consigned by Lane’s End, agent. The colt is from the family of Grade 1 winners Secret Status and Dunbar Road as well as Grade 2 winner Private Mission, Grade 3 winner Alumni Hall and Belmont (G1) runner-up Dunkirk. The colt is out of the Courageous Cat mare Secret Ballot.

At $425,000, a colt by Take Charge Indy sold to Maverick Racing and Siena Farm. Out of the Ghostzapper mare Dynamic Doll, he is from the family of Grade 3 winners Lawn Ranger and Georgie’s Angel. The colt was consigned by Taylor Made Sales Agency, agent.

Maverick Racing and Siena Farm led all buyers by spending $825,000 for three horses.

Justin Casse, agent, went to $410,000 to acquire a colt by Not This Time who is a half-brother to Grade 2 winner Du Jour. Consigned by Woods Edge Farm (Peter O’Callaghan), agent, the colt is out of the Bernardini mare Guiltless and from the family of Grade 1 winners and sires Ghostzapper and City Zip.

Mike Ryan, agent, paid $400,000 for a colt by Omaha Beach. Consigned by Hartwell Farm, agent, he is out of the winning Awesome Again mare Satisfaction and a half-brother to Grade 2-placed Tuggle and stakes-placed Miss Yearwood. The colt is also from the family of champion Heavenly Prize and Grade 1 winners Dancing Forever, Dancing Spree and Instilled Regard.

The September Sale continues Tuesday at 10 a.m. ET and runs daily through Saturday. The entire auction is streamed live atKeeneland.com.