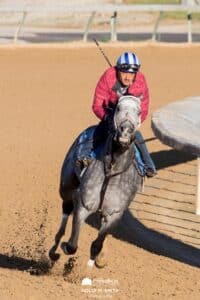 Trained by 2020 Eclipse Award-winning conditioner Brad Cox, Knicks Go began his three-quarters of a mile work from the half-mile pole with exercise rider Edvin Vargas in the saddle. Cox hopes to use the Lukas Classic as a springboard to the $6 million Longines Breeders’ Cup Classic (GI) on Nov. 6 at Del Mar.

“This race is a good spot for him leading into the Breeders’ Cup,” Cox said. “He came out of the Whitney really well and we got him back home to Churchill where he’s settled in nicely. He’s a horse that does his best running around two turns.

“In the Whitney, it was an incredible performance for him to go :46 and change and get distance on those other horses. Then he kicked home very well in deep stretch. I’m really proud of that effort.”

Two hours prior to Knicks Go’s strong move, Godolphin’s top 3-year-old colt Essential Qualityreturned to the work tab for the first time since his victory in the $1.25 million Travers (GI). The gray son ofTapit breezed an easy half-mile in :49.40 under Vargas.

There were 190 horses that recorded published workouts Saturday morning beneath the Twin Spires including 112 2-year-olds. Among the many juveniles that breezed was Godolphin’s Famed, the half-sister to Essential Quality. The daughter of Uncle Mo worked five furlongs in 1:00 from the gate and is getting closer to a start, according to Cox.

Most races from Churchill Downs Racetrack are broadcast on FOX Sports’ “America’s Day at the Races” on either FS2 or FS1, but Saturday’s Utah State at Air Force 7:30 p.m. (all times Eastern) on FS2, as well as live boxing at 7 p.m. and the Oklahoma State at Boise State game 9 p.m. on FS1 will limit Saturday’s broadcast at Churchill Downs to only the first four races on the 11-race card.

DOWN THE STRETCH – Racing on Saturday had a first post of 6 p.m. for Downs After Dark presented by Budweiser. The stakes-laden program was headlined by the $300,000 Iroquois (GIII) and $300,000 Pocahontas (GIII) – the kick off to the “Road to the Kentucky Derby presented by Woodford Reserve” and “Road to the Kentucky Oaks,” respectively. Saturday’s 20-cent Derby City 6 had a $29,475 carryover in Races 4-9. … Jockey Gabriel Saez was at Churchill Downs on Friday for the first time since he fractured his ankle. Saezsaid he hopes to be back in the saddle in a few months but “doesn’t want to rush back too quickly.” … Racing continues Sunday at Churchill Downs with a 12:45 p.m. first post. For more information and to purchase tickets, visit www.churchilldowns.com/tickets.