Knicks Go Scheduled to Return to Churchill Downs on Tuesday

Knicks Go Scheduled to Return to Churchill Downs on Tuesday 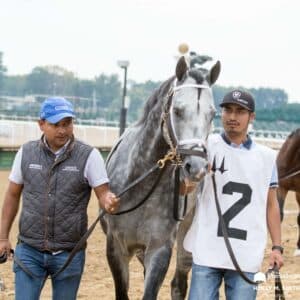 Saturday’s $6 million Breeders’ Cup Classic (Grade I) champion Knicks Go is set to return to Churchill Downs on Tuesday evening along with several other of his stablemates from the Brad Cox barn.

“He ran an extraordinary effort in the Classic,” Cox said. “We’re very proud of him and his campaign this year. Things really worked out the way we planned. It means a lot to our team and his owners to win this race.”

The Breeders’ Cup World Championships have been held at Del Mar twice and the Classic has been won each time by a locally based horse: Knicks Go and Gun Runner in 2017.

“This victory was the pinnacle of my career,” Catalano said following the race.

The 65-year-old trainer has trained less horses recently and his usual full barn at Churchill Downs has only four horses. Catalano also keeps a string of horses at Keeneland where Aloha West is scheduled to return Wednesday. Aloha West’s victory in the Sprint was Catalano’s 2,931th as a trainer. He sports a trio of other Breeders’ Cup victories with Stephanie’s Kitten (2011 Juvenile Turf), She Be Wild (2009 Juvenile Fillies) and Dreaming of Anna (2006 Juvenile Fillies).

DOWN THE STRETCH – Racing continued Sunday at Churchill Downs with a first post of 1 p.m. There was a $60,706 carryover in the 20-cent Derby City 6 in Races 5-10. … Sunday was Military Appreciation Day with free admission or a discounted $29 ticket to Skye Terrace for active and retired members of the U.S. armed services. … After dark days on Monday and Tuesday, racing will resume Wednesday-Sunday with daily first posts of 1 p.m. … Saturday’s program will feature the $300,000 Dream Supreme and a rematch between multiple graded stakes winners Bell’s the One and Sconsin. Entries for Saturday’s card will be drawn Wednesday. … A memorial service for late jockey Miguel Mena will take place Wednesday at 10 a.m. at St. Patrick Catholic Church in Louisville. The visitation will be held from 4-8 p.m. Tuesday at Ratterman Funeral Home in East Louisville. … First Responders Day with free admission or a discounted $29 ticket to Millionaires Row for active first responders is Sunday, Nov. 14. … The victory by Necker Island in Saturday’s $300,000 Bet On Sunshine gave jockey Mitchell Murrill his first Churchill Downs stakes win. … For more information about the Fall Meet, visit www.churchilldowns.com.