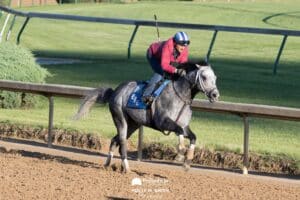 “He’s a horse that puts a lot into his training and he’s done that leading into Saturday’s race,” trainerBrad Cox said. “He’s accomplished a lot this year and we believe the Lukas Classic is a good race to compete in prior to the Breeders’ Cup. This race doesn’t require him to ship and he can run out of his own stall.”

Knicks Go (22-8-3-1—$5,368,995) had a strong 1 ½-mile gallop early Thursday morning prior to schooling in the paddock at 10 a.m. The Maryland-bred competed four times at Churchill Downs while under the care of trainer Ben Colebrook but has not recorded victory beneath the Twin Spires.

Knicks Go is scheduled to face five rivals in the 1 1/8-mile Lukas Classic including Juddmonte’smultiple graded stakes winning homebred Tacitus. The gray son of Tapit arrived to trainer Bill Mott’s Churchill Downs base earlier in the week from Saratoga. Saturday’s race will be the first time Tacitus has competed since finishing seventh in the $20 million Saudi Cup (GI) in February.

Trained by Hall of Famer Steve Asmussen, Beau Liam (3-3-0-0—$171,888) is the least experienced horse in the Ack Ack with only three prior starts. The other 10 rivals in the race have made an average of 17 lifetime starts. Beau Liam drew post No. 10 for Saturday’s one-mile event, his stakes debut. Jockey Brian Hernandez Jr. will be filling in to ride the speedy son of Liam’s Map for regular rider Ricardo Santana Jr., who will ride Gunite in the $500,000 Champagne (GI) at New York’s Belmont Park for Asmussen.

Beau Liam returned to Churchill Downs from Saratoga a week ago and recorded an easy half-mile move Monday in :49.20. He also schooled in the paddock Thursday morning.

The Ack Ack serves as a prep for the $1 million Breeders’ Cup Dirt Mile (GI) at Del Mar on Nov. 6.

MEET LEADERS – With four days remaining in the September Meet, Tyler Gaffalione held a slim lead over Brian Hernandez Jr. in the jockey standings 11-10 wins. Joe Talamo was in third with six wins. … Hernandez won with 8 of his 27 mounts last week for a 30% win-clip. … Kenny McPeek had a 6-4 win lead in the trainer standings over Steve Asmussen after winning with five of his nine starters last week. … WinStarFarm and Siena Farm held the top spot in the owner standings with three victories.

MEMORIAL TO CELEBRATE ‘DOC’ RICHARDSON SATURDAY 2-4 P.M. – A public memorial to celebrate the life of the late Dr. J. David “Doc” Richardson will be held Saturday (Oct. 2) at Churchill Downs.

Richardson, the distinguished Louisville surgeon who was an owner, breeder and widely-respected leader in the horse racing industry, died Sept. 7 in Saratoga Springs, N.Y. from complications due to a breakthrough COVID infection. He was 76.

The celebration will take place Saturday from 2-4 p.m. (all times Eastern) in the Starting Gate Suites 4th Floor. Guests should enter Churchill Downs via the Executive Gate, which is located next to the Kentucky Derby Museum near the Barbaro horse statue.

Saturday’s sixth race, which is scheduled to run at approximately 3:18 p.m., will be dedicated to “Doc” and the “J. David ‘Doc’ Richardson Celebration of Life” trophy will be presented to the winning connections.

Because Sunday is closing day, there will be a mandatory Derby City 6 payout with all monies distributed to ticket holders with the most winners in the six-race series. Sunday’s Derby City 6, which only costs 20 cents per combination, is scheduled to cover Races 5-10 starting at approximately 2:45 p.m. (all times Eastern).

DOWN THE STRETCH – The final Twilight Thursday presented by Blue Moon of the calendar year will kick off closing week of the September Meet. Thursday’s eight-race card had a first post of 5 p.m. and featured $1 Blue Moon and select domestic beer, local food trucks and live music from Roadie. There was a $59,784 carryover in the 20-cent Derby City 6 that spanned Races 3-8. … Jockey Mitchell Murrill began serving a three-day suspension on Thursday. He’s scheduled to ride Sunday. … Churchill Downs training hours will be from 5:30-9 a.m. Oct. 4-11 with one renovation break at 7 a.m. … Sunday is Law Enforcement Day at Churchill Downs. Law enforcement officers will receive free general admission with a valid I.D. There are also discounted dining tickets available for officers. Those tickets can be purchased by calling the group sales office at 502-636-4450 or emailing [email protected].