Letruska Scheduled To Run at Keeneland On Opening Weekend

Letruska Scheduled To Run at Keeneland On Opening Weekend 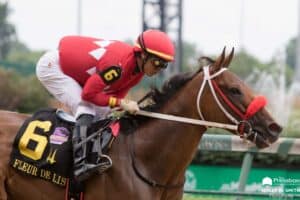 St. George Stable’s Letruska, a three-time Grade 1 winner in 2021, plus defending race champions Ivar (BRZ), Diamond Oops and Inthemidstofbiz are among the standouts who have been nominated to race at Keeneland during Fall Stars Weekend on Oct. 8-10, opening weekend of the 17-day Fall Meet that marks the track’s 85th anniversary. First post each day of the season, which runs through Oct. 30, is 1 p.m. ET.

Featuring horses from the nation’s leading owners, trainers and jockeys, Fall Stars Weekend consists of 10 stakes, nine of which are graded, worth $3.65 million. Five of those races are Grade 1 events, and nine of them are Breeders’ Cup Challenge races that are “Win and You’re In” contests that award the winners fees-paid berths into corresponding races for the World Championships at Del Mar on Nov. 4-5.

Click here for the lists of horses nominated to Fall Stars Weekend stakes and their past performances. Here is a look at those nominations:

Trained by Cherie DeVaux, Tarabi won her debut and in her most recent start was second in the 7-furlong Spinaway (G1) at Saratoga.

Runup, trained by Laura Wohlers, posted a 3-length victory in Monmouth’s Sorority, which was contested around two turns going a mile. She has won two of three starts.

Among other nominees are Harold Lerner, AWC Stables, Nehoc Stables, Scott Akman and Paul Braverman et al’s Mama Rina, trained by Kenny McPeek, and Red Oak Stable’s Goddess of Fire, trained by Todd Pletcher. The fillies are the 2-3 finishers in the Pocahontas (G3) run at 1 1/16 miles at Churchill on Sept. 18.

Diamond Oops prevailed in last year’s Stoll Keenon Ogden Phoenix by three-quarters of a length over 51-1 longshot Empire of Gold, who is nominated to the 2021 renewal for Johnny Evans and trainer Terry Eoff.

John Sadler trains Flagstaff, who won the Churchill Downs (G1) on Kentucky Derby Day. Mike Maker trains Special Reserve, who was second in the Alfred G. Vanderbilt (G1) at Saratoga in his most recent start.

Topping the roster of nominees for the 36th running of the race is defending champion Ivar (BRZ).

Owned by Bonne Chance Farm and Stud R D I and trained by Paulo Lobo, Ivar has raced only once in 2021, finishing sixth when beaten 2 lengths in the Turf Classic (G1) at Churchill on Kentucky Derby Day.

Order of Australia, who won the Breeders’ Cup Mile at 73-1 odds, is owned by Derrick Smith, Mrs. John Magnier, Michael Tabor and Anne Marie O’Brien. In his most recent start, Order of Australia was second in the Prix du Moulin de Longchamp (G1).

Lope Y Fernandez, owned by the partnership of Tabor, Smith and Magnier, has won one of six starts in 2021 since his third-place Breeders’ Cup finish.

Claiborne Breeders’ Futurity (G1): Two-turn stakes winners Major General and Double Thunder, both trained by Todd Pletcher, top a total of 44 nominees for the 108th running of the
1 1/16-mile dirt test for 2-year-olds.

The $500,000 Claiborne Breeders’ Futurity is a “Win and You’re In” race for the $2 million TVG Breeders’ Cup Juvenile (G1) Presented by Thoroughbred Aftercare Alliance to be run Nov. 5.

WinStar Farm and Siena Farm’s Major General is undefeated in his two career starts with a narrow victory in the 1 1/16-mile Iroquois (G3) in his most recent outing Sept. 18 at Churchill.

Phoenix Thoroughbreds’ Double Thunder won the 1-mile Sapling at Monmouth on Sept. 5 in his most recent start. Double Thunder has won three of his four starts, including the Bashford Manor (G3) this summer at Churchill.

First Lady (G1) Presented by UK HealthCare: Godolphin’s homebred Althiqa (GB), winner of the Just a Game (G1) and Diana (G1) in her two ventures to North America this year, headlines a roster of 25 nominees for the 24th running of the $400,000 race for fillies and mares to be contested over a mile on the Keeneland turf course.

Never worse than third in 11 career starts, Althiqa is trained by Charlie Appleby.

Trainer Chad Brown, who has saddled the First Lady winner the past three years and four times overall, has three mares nominated to this year’s renewal.

Brown’s other nominees are multiple stakes winners Regal Glory and Blowout (GB). Both are owned by Peter Brant.

Another nominee is the Estate of Harvey A. Clarke and Paul Braverman’s Harvey’s Lil Goil, winner of last year’s Queen Elizabeth II Challenge Cup (G1) Presented by Dixiana at Keeneland. She is trained by Bill Mott.

Thoroughbred Club of America (G2): Contreras Stable and Andrew Knapczyk’s Inthemidstofbiz, upset winner of the 2020 TCA, is among 23 fillies and mares nominated to the 41st running of the $250,000 sprint at 6 furlongs on dirt.

The Thoroughbred Club of America is a “Win and You’re In” race for the $1 million Breeders’ Cup Filly and Mare Sprint (G1) to be run Nov. 6.

Trained by Cipriano Contreras, Inthemidstofbiz has run twice in 2021. In her most recent start, she was fourth in the Satin and Lace Stakes at Presque Isle Downs. She used that race as a prep for the 2020 TCA.

Only one horse has won the TCA in consecutive years: Excitable Lady in 1982-1983.

Woodford (G2) Presented by TVG: Ranlo Investment’s Golden Pal, winner of last year’s Breeders’ Cup Juvenile Turf Sprint (G2) at Keeneland, and stablemate Campanelle (IRE), a two-time Group 1 winner owned by Stonestreet Stables, highlight a roster of 20 turf sprinters nominated to the 25th running of the $200,000 race for 3-year-olds and up going 5½ furlongs over the Keeneland grass course. Both are trained by Wesley Ward.

Golden Pal won the Quick Call (G3) at Saratoga in July and was seventh in the Coolmore Wootton Bassett Nunthorpe (G1) last month at York in England.

Campanelle captured the Commonwealth Cup (G1) at Royal Ascot in England in July. Last year at 2, she won the Queen Mary (G2) at Royal Ascot and the Darley Prix Morny (G1) at Deauville in France.

Juddmonte Spinster (G1): St. George Stable’s Letruska, winner of five of six starts in 2021 and the front-runner for an Eclipse Award as champion older dirt female, tops a list of 26 fillies and mares nominated to the 66th running of the 1 1/8-mile, $500,000 stakes.

The Juddmonte Spinster is a “Win and You’re In” race for the $2 million Breeders’ Cup Distaff (G1) to be run Nov. 6.

Trained by Fausto Gutierrez, Letruska has won her past four races with Grade 1 scores in the Apple Blossom, Ogden Phipps and Personal Ensign Presented by Lia Infinity.

Trained by Kenny McPeek, Tiz the Bomb is undefeated in two grass starts.

Indian Summer (L) Presented by Keeneland Select: Silverton Hill’s Red Danger, winner of the Global Tote Juvenile Sprint Stakes (L) at Kentucky Downs, headlines the 37 nominees to the fourth running of the $200,000 race for 2-year-olds going 5½ furlongs on the grass.

The Indian Summer is a “Win and You’re In” race for the $1 million Breeders’ Cup Juvenile Turf Sprint (G2) to be run Nov. 5.

Trained by Brian Lynch, Red Danger is perfect in his two grass starts.

During the Fall Meet, TVG will present live, on-site coverage on race days starting at 1 p.m.

Thanks to the Keeneland Livestream, all Keeneland races are streamed live and at no charge on Keeneland.com, Keeneland Race Day App, Keeneland Select and Keeneland’s YouTube page.