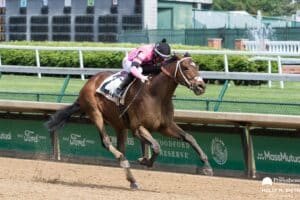 Lone Rock tries to punctuate a sensational 2021 campaign in the inaugural $200,000 Tinsel Stakes Saturday at Oaklawn.

The Tinsel, for 3-year-olds and up, is among four new races added to Oaklawn’s stakes schedule to accommodate an expanded season in 2021-2022 (66 days) and December opening, the earliest in track history. It has drawn a field of seven, including three millionaire multiple graded stakes winners.

Lone Rock opened 2021 with an allowance victory at 1 1/16 miles last February at Oaklawn, his first start since trainer Robertino Diodoro re-claimed the gelding for $40,000 in November 2020 at Churchill Downs. A two-time allowance winner at the 2021 Oaklawn meeting, Lone Rock flourished after targeting races beyond the American classic distance (1 ¼ miles) and surpassed $1 million in career earnings with a 1 ½-length victory in the $250,000 Thoroughbred Aftercare Alliance Stakes (G2) Nov. 6 at Del Mar in his last start. Lone Rock set a 1 5/8-mile track record (2:42.61) under Oaklawn regular Ramon Vazquez.

Diodoro said he doesn’t believe cutting back to 1 1/8 miles will be a problem for Lone Rock, whose shortest race this year was the February allowance.

“I don’t think so, just because the horse is doing so good right now and there’s enough speed in there, on paper, anyway,” Diodoro said. “Again, we’ll see what happens Saturday.”

Lone Rock has bankrolled $722,884 in winning 6 of 8 starts (all in 2021) since Diodoro took back the now-6-year-old Majestic Warrior gelding on behalf of New York owner Jason Provenzano (Flying P Stable). Prior to the Thoroughbred Aftercare Alliance, Lone Rock had captured an April 11 allowance race at Oaklawn, $130,000 Isaac Murphy Marathon Overnight Stakes April 27 at Churchill Downs, $400,000 Brooklyn Stakes (G2) June 5 at Belmont Park and the $120,000 Birdstone Stakes Aug. 5 at Saratoga.

The April 11 race, Isaac Murphy and Brooklyn were all 1 ½ miles. The Birdstone was 1 ¾ miles. Lone Rock also finished second in another 1 ½-mile race, the $150,000 Temperence Hill Stakes for older horses, March 13 at Oaklawn.

Overall, Lone Rock has a 13-4-2 record from 36 lifetime starts and earnings of $1,024,921. The Thoroughbred Aftercare Alliance was his fifth career stakes victory.

Diodoro said the Tinsel could serve as the gelding’s bridge to another shot against Grade-1 company in 2022. Lone Rock ran in the $500,000 Breeders’ Futurity (G1) for 2-year-olds in 2017 at Keeneland, but spent most of his career in the allowance ranks before blossoming in niche events this year.

“At the same time, it’s one day at a time, definitely,” Diodoro said. “We’re just focused on Saturday night now and see what happens.”

“He likes Oaklawn,” Cox said. “I think it’s a good spot. He drew well. Looks like a shorter field. I think it’s good timing since his last race. He received some big figures out of his last run and he’s had plenty of time to recover from it. If he gets some similar figures again, I think we’ll be in good shape.”

Tenfold, a Grade 2 winner, captured his first two career starts at the 2018 Oaklawn meeting for Hall of Fame trainer Steve Asmussen before finishing third in the Preakness. Diodoro also entered the speedy Thomas Shelby, who has won three consecutive starts, including a narrow decision over Warrior’s Charge in October, and seven overall in 2021.

“There’s lots of speed in the race, but we definitely aren’t changing our tactics, that’s for sure,” said Diodoro, who trains Thomas Shelby for four-time defending Oaklawn champion owner M and M Racing (Mike and Mickala Sisk). “We’re going to go as hard as we need to go on the front end and hopefully have enough to last.”

Beau Luminarie is the first scheduled starter at the meeting for trainer Rodolphe Brisset, who won the $750,000 Oaklawn Handicap (G2) for older horses in 2019 at Oaklawn with Quip. Beau Luminarie is seeking his first stakes victory after near-misses in the $150,000 Ben Ali (G3) April 10 at Keeneland and the $60,000 Tri-State Overnight Aug. 7 at Ellis Park. Although Beau Luminarie has nine runner-up finishes in his 18-race career, he’s won his last two starts, both in allowance company this fall in Kentucky.

“I think with the year he’s had, it’s no pressure,” Brisset said. “He’s just turned the corner and found the wire. He’s been finding the wire. Before, he had a tendency to want to hang, he had a tendency to want to run second. All of a sudden, he just learned how to win. I think we are in the right spot. I’m not saying he’s going to win by 5, but he’s improving and we’ll see what happens. Likely, he’ll get a break after the race and set him up for next year.”