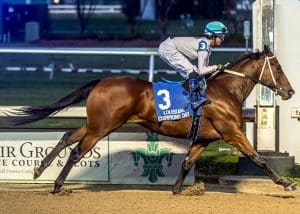 The commanding speed in the $150,000 Louisiana Champions Day Classic, Set-Hut’s Touchuponastar overcame a slow break to lead through all calls and pour it on late to win by 4 3/4 lengths over Behemah Star. The Star Guitar-sired exacta had plenty in the tanks after coasting through soft fractions, keeping the odds-on favorite Who Took the Money at bay.

Pausing for an instant after the gates flew upon, Touchuponastar recovered quickly, hustling by the early challenger Highland Creek in the early going to set fractions of 24.55 and 49.34. He received no pressure as Highland Creek kept 1 1/2 lengths back to his outside. Behemah Star made his move to take over in second through the final bend but never menaced Touchuponastar who extended his lead to six lengths at the stretch call. Who Took the Money stalked wide in sixth before beginning a late move that never threatened the winner but was game enough to beat Ballinonabudjet for third.  The rest finished well back.

“We knew he was a special horse all along,” Timothy Thornton said. “We knew we were coming here to beat Who Took the Money, but when I was able to get that first quarter as slow as I was going, I thought Calhoun’s horse (Highland Creek) was going to pressure me. When they left me alone, I knew I was going to have plenty left, and he was definitely able to show how special he is today.”

Touchuponastar is a son of Guitar Star out of the Lion Heart mare Touch Magic and was bred in Louisiana by Coteau Grove Farms. The four-time winner returned $12.40, $5.60 and $3.00 as the 5-1 third betting choice in the field of seven older males.

“He’s young and has a big future ahead of him,” trainer Jeff Delhomme said. “We were leaning towards the Classic the entire time (instead of the Sprint). We didn’t run in the prep because earlier in the career we swung back in three weeks and we think that ended up being a little too fast. It opens a lot of doors for us to be able to get nine furlongs, even outside Louisiana-bred horses.”

In other stakes action on the Louisiana Champions Day Card, Kendel D. Standlee’s Big Chopper rolled from off a 44.79 opening half mile to win the $100,000 Sprint going away at 6-1 for trainer Scott Gelner and jockey Corey Lanerie. He was followed home in the trifecta by longshots Relentless Dancer (15-1) and Mike J (46-1). After pressing into a hot pace, 2-1 favorite Bertie’s Galaxy finished last of the 12.

In the $100,000 Ladies Distaff, Thomas Galvin’s A.G’s Charlotte proved her upset win in the Big World last month was no fluke, but this time she was forced to close into moderate fractions instead of having the table set for her. The circumstances were different, but the results were the same as she scored by a narrow margin under a heady, rail-skimming ride by Marcelino Pedroza, Jr. as the 5-2 second choice for trainer Patricia West. The pacesetter Winning Romance, who walked through an opening half-mile in 49.19, battled gamely but finished second  as the 3-5 public choice. Fort Polk, last year’s Distaff winner, settled for third.

In the $100,000 Ladies Sprint, Brittlyn Stables’ Ova Charged made short work of her overmatched rivals, rolling home in gate-to-wire fashion to score by 4 ¾ effortless lengths at the 1-5 chalk for Jose Camejo. Free Like a Girl, Spirited Beauty and Snowball completed the order of finish. With the win, Evelyn Benoit’s Brittlyn Stables extended their record of Champions Day wins to 15.

In the $100,000 Juvenile, Kevin Stedman’s Late September (5-1) broke inward from the starting gate, wired the field, and eventually survived a claim of foul to give trainer Jose Camejo his first of two Champions Day wins on the card. It was one of three scores on the day for Fair Grounds’ leading rider Jose Luis Rodriguez. Tumbarumba, the 3-5 favorite, was severely compromised at the start, but he rallied on nicely to be second in front of Calicoco, who checked in third.

In the $100,000 Lassie, Mansfield Racing’s Free Drop Maddy (6-5 second choice) battled for the lead from the rail, took over on the turn for home and built the lead in the stretch before holding off the slow starting 1-1 favorite Norah G to win by a diminishing neck. It was far back to Tensas Candy in third.

Racing at Fair Grounds is back on Sunday with the first post scheduled for 1:15 p.m CT and a card of eight races on the dirt.

Corey Lanerie (jockey, Big Chopper, winner) — “He broke sharp. He was cutting back in distance today so I really didn’t think he’d be close (early). I found myself a little bit further back than I thought (I would be), but I figured they were rolling (up front). Me and Scottie (trainer Gelner) talked about it. Don’t send him, just let him run his race and hope for the best. When I called on him, he exploded.”

Scott Gelner (trainer, Big Chopper, winner) — “I think the grass is eventually where he’s going to want to be. I wanted to run him long (in the Classic) today, but I knew Jake (Delhomme’s) horse was in there (Touchuponastar), but I didn’t want to see those two hooking up so. He won his race, I won mine, so we’re both a winner. I felt good around the 3/8ths pole. He was sitting good and Corey (jockey Lanerie) rode him perfectly.”

“I never thought it was going to be that slow. So there wasn’t as much pace as last time. I saw the opening at the top of the stretch and I said let’s go for it and hope she is there with me. And she showed a lot of heart.

Patricia West (trainer of the winner)

“We’re very proud of our filly. I thought she was close enough to the pace. I thought all along she just needed to be more mature and I think she’s only getting better from here.”

“His last race he moved from 7 furlongs to 5 1/2  which can be a little confusing for a 2-year-old, plus the track was wet. We’ve kept him happy, and the extra 1/2 furlong today with the outside position made a big difference. Jose Luis Rodriguez is a wonderful rider, he fits the track really well and I hope he continues his success.”

Kevin Stedman (owner of the winner)

“One of the reasons I got into the game was to follow the horses around. There’s a lot of beautiful tracks around the world and obviously Fair Grounds is one of them. We had eyes on coming here that this would be a meet we targeted.”

“We got taken out of the race leaving the gate and it was hard to recover. I almost fell off (the horse). We made up ground and I dropped on the inside but the winner was already gone. I thought Tumbarumba was the best horse in there, but we didn’t have a fair chance at it.”

“Going into the turn, right before they switched leads, I wanted to make sure I established my position, I let the other horse head me so I could get a breather, out of the turn I want to get away so she gets confidence, and she got away after that. I took a peek under my elbow and saw her coming. The rail has been golden lately so I knew if there was an enemy coming then they’d be coming from the rail. I kept myself open and I was going to drop down on them. So when I went to the right hand and it helped her rally, she was very game.”

Bret Calhoun (trainer of the winner)

“It’s always nice to have a good Louisiana-bred. There are plenty of opportunities for them, and you can run them year-round here. I knew she was going to be expensive. She’s a little bit on the smaller side but has a big heart and a lot of try to her.”

“For 2022, we’re done, we’ll give time, and then we’ll see how she starts training. We’ll check the condition book and see what she’s got for next year. The way she ran today was very impressive, I expected that because she came back from the last race like it was a breeze. We just kept her happy and she proved today that she is the best filly today.”

Evelyn Benoit (owner of the winner)

“I want everyone in Louisiana to be a part of Star Guiatr’s success. That’s why I stay here in Louisiana. I’m trying to prove that we are tough in Louisiana and stop any laughing or joking about Louisiana stallions.”

“This was the plan when he claimed this horse at Delta Downs. I’ve got the greatest team who is working hard for us every day. I’m glad for them, I’m glad for Vanessa, and I’m glad for Tracy. We put in a lot of time for this horse. It’s been almost 60 days of work non-stop for 1 minute and 8 seconds. He showed his stuff today. He gets some extra peppermints.”

Tracy Hebert (jockey on the winner)

“Everything went well. He broke well and was right where I wanted him to be. When I pulled the trigger he gave it to me. It’s important to be anywhere.”

“(Zydeco Music) ran her race today. She got beat by a nod last time and there was speed in that one like there was today, but she got a fantastic trip and with the way she’s been doing, that’s all she needed. We’re feeling good about our barn and it’s great working with owners like Richard.”