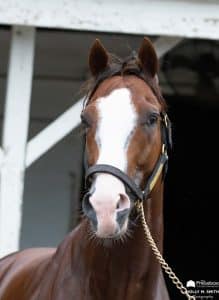 Reeves Thoroughbred Racing’s multiple stakes winning sprinter Isolate will lead a group of nine colts and geldings that were entered in the Saturday’s second running of the $275,000 Louisville Thoroughbred Society at Churchill Downs.

Isolate, trained by Tom Amoss, will enter the Louisville Thoroughbred Society on a two-race win streak after open-length victories in the $75,000 Work All Week Stakes at Hawthorne and $125,000 Tale of the Cat at Saratoga. The six-time winning son of Mark Valeski will be ridden by Joel Rosario and break from post No. 6.

Chief among his rivals in the Louisville Thoroughbred Society is The Scherr Boys’ multiple stakes winner Necker Island. Trained by Chris Hartman, Necker Island won the $75,000 Jeff Hall Memorial at Ellis Park and crossed the wire first in the $150,000 Chesapeake Stakes at Colonial Downs but was subsequently disqualified and placed third due to interference in deep stretch. The 5-year-old son of Hard Spun has recorded five wins from 12 starts at Churchill Downs, most notably a head victory in last year’s $300,000 Bet On Sunshine Stakes. Francisco Arrieta will have the mount from post 4.

Here’s the field for the Louisville Thoroughbred Society from the rail out (with jockey and trainer):