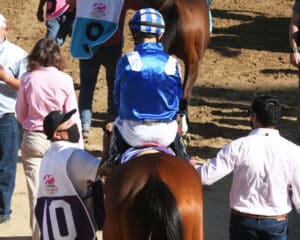 Shadwell Stable’s undefeated Malathaat has demonstrated class and determination through five wins in as many lifetime starts and will vie to keep her perfect ways afloat in Saturday’s 105th running of the Grade 1, $500,000 Coaching Club American Oaks going nine furlongs for 3-year-old fillies at Saratoga Race Course.

The Coaching Club American Oaks was named in honor of a club formed in 1875 for which a membership requirement was to be able to navigate a coach and four horses with a single group of reins. Inaugurated in 1917, the historic event often attracts the winner of the Kentucky Oaks and has seen 14 fillies sweep the Kentucky Oaks-CCA Oaks double, including Hall of Famers Princess Doreen [1924], Dark Mirage [1968], Davona Dale [1979], Bold ‘n Determined [1980], and Open Mind [1989].

Two-time Grade 1-winner Malathaat arrives at the CCA Oaks off a hard-fought triumph in the Grade 1 Kentucky Oaks on April 30 at Churchill Downs, where she engaged in a stretch duel with graded stakes winner Search Results and won by a neck, garnering a career-best 95 Beyer Speed Figure.

The Kentucky Oaks triumph came after a successful sophomore bow in the Grade 1 Ashland on April 3 at Keeneland where she tracked leisurely fractions and closed in on Pass the Champagne in the final half-furlong to win by a head.

During her juvenile campaign, Malathaat notched stakes triumphs at Aqueduct in the Tempted and Grade 2 Demoiselle after giving Hall of Fame jockey John Velazquez his 2,000th Belmont Park victory in October.

Hall of Fame trainer Todd Pletcher will look to extend his seven-win record in the prestigious race when he saddles Malathaat. A victory would give Pletcher a third CCA Oaks triumph with a Kentucky Oaks winner, having sent out Ashado and Princess of Sylmar [2013].

“She’s a very gifted filly,” Pletcher said. “She’s just been perfect so far and she’s a pleasure to train, and just does everything right. When you have one that’s undefeated you just want to keep that intact and hope that everything goes smoothly and that she’s able to show her capabilities once more.”

Bred in Kentucky by Stonestreet Thoroughbred Holdings, Malathaat is the first offspring out of the A.P. Indy broodmare Dreaming of Julia, who captured the 2012 Grade 1 Frizette and the 2013 Grade 2 Gulfstream Park Oaks for Pletcher.

“She’s a bigger physical than Dreaming of Julia and maybe Dreaming of Julia was a tad quicker than she is,” Pletcher said. “But she’s just so efficient and has a long stride and it seems like she’s bred to get better now. She’s growing into that big frame. She’s fun to have in the barn and I’m looking forward to get her going again.”

Malathaat was initially campaigned for an earlier return to action.

“We did miss a little time with her and she was a little bit sore, so we took it easy with her,” said Shadwell Stable’s vice president and general manager Rick Nichols. “Todd had her training real well into the Ashland. I loved the way that she fought in the Oaks. She just has so much class and determination.”

Malathaat has settled into her surroundings at Saratoga and recently breezed a half-mile in 48.05 seconds on July 17 over the main track in company with Grade 2 Mother Goose-winner Zaajel.

“She’s doing great and seems to be loving Saratoga,” Nichols said. “The main thing about her is early on, she had such an effortless gallop. She covers the ground so easily. It doesn’t look like she has to work hard at all.”

Pletcher said he is grateful for his relationship with Shadwell, for whom he also has campaigned recent graded stakes winner Mutasaabeq.

“We’ve been blessed to have received some of their horses and have built some good relationships so far,” Pletcher said. “To have [graded stakes winners] Mutasaabeq and Zaajel and Malathaat, we’re off to a good start and happy to be part of the team.”

Shadwell purchased Malathaat for $1.05 million from the Denali Stud consignment at the 2019 Keeneland September Yearling Sale.

“Physically, she’s about as perfect as you can get,” Nichols said. “She just looked like a horse that would have a lot of class. She had a very attractive head, beautiful balance, and her limbs were good. As soon as I saw her at the sale, I knew Sheikh Hamdan would love her. Malathaat could be the foundation mare of the next generation for his family.”

Velazquez, who has guided Malathaat to three of her five wins, retains the mount from post 1. A five-time winner of the CCA Oaks, Velazquez seeks to become the standalone winningest jockey in the race’s history.

Two Kentucky Oaks participants face Malathaat once more, including Beach Haven Thoroughbreds’ Maracuja, who was seventh in the Kentucky Oaks.

The Rob Atras-trained daughter of third crop sire Honor Code broke a touch slow in the Oaks, but made up considerable ground to run seventh.

“In the Oaks, she broke a little flat footed, but we’re hoping she breaks sharper and won’t be too far back in a shorter field,” Atras said. “She was down on the inside and going into the first turn she got shuffled back. She made a good run late and I was happy with the performance. She just needs to break sharper and get in a more tactical position.”

Prior to the Kentucky Oaks, Maracuja was a third-out maiden special weight victress going 6 ½ furlongs over the Aqueduct main track en route to a runner-up finish in the Grade 3 Gazelle on April 3 at the Big A.

“She came back really well, and we skipped the Acorn and were targeting the Mother Goose but she wasn’t quite right,” Atras said.” She’s doing well right now. She bounced out of it well. We worked her three times and I’m hoping she’s good enough to run a top race.”

Stonestreet Stables’ Clairiere, fourth in the Kentucky Oaks, arrives off a close third to Zaajel in the Grade 2 Mother Goose for Hall of Famer Steve Asmussen.

The bay daughter of Curlin attempts a second graded stakes victory after notching her seasonal debut in the Grade 2 Rachel Alexandra on February 13 at Fair Grounds Race Course over Travel Column. Clairiere was second to Travel Column in the next out Grade 2 Fair Grounds Oaks.

A Kentucky homebred, Clairiere is the first offspring out of the three-time Grade 1-winning Bernardini mare Cavorting, who earned over $2 million through a lifetime record of 13-8-1-1.

Jockey Irad Ortiz, Jr. earned his first Grade 1 victory when guiding Questing to victory in the 2012 CCA Oaks and will ride Clairiere from post 4.

Completing the field is allowance winner Rockpaperscissors for WinStar Stablemates Racing, who swept the exacta in last year’s CCA Oaks with Paris Lights and Crystal Ball.

Trained by Rodolphe Brisset, the daughter of Distorted Humor broke her maiden at a one-turn mile in September at Churchill Downs and did not race again until June 21, where she defeated older allowance company at Indiana Grand Race Course by 9 ¾ lengths.

Breaking from post 3, Rockpaperscissors will be ridden by Luis Saez.