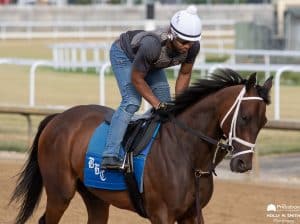 Godolphin homebred Matareya has answered every question asked of her with aplomb this year, finding her best stride around one turn and posting a perfect 4-for-4 record that she will put on the line against six rivals in Saturday’s Grade 1, $500,000 Longines Test, a seven-furlong sprint for sophomore fillies, at Saratoga Race Course.

The Test is one of three Grade 1 events on Saturday, led by the nine-furlong $1 million Whitney for older horses over the main track and the 1 3/16-mile $1 million Caesars Saratoga Derby for sophomores on the Mellon turf. The lucrative card also features the Grade 2, $250,000 Glens Falls for older fillies and mares over the lawn; and the $135,000 Fasig-Tipton Lure, a restricted stakes for older horses travelling 1 1/16 miles over the turf.

Matareya has flourished this year under the care of conditioner Brad Cox after going 1-for-4 in her juvenile campaign. The bay daughter of the late Pioneerof the Nile has won her four outings this season by a combined 22 1/4 lengths, most recently scoring her first Grade 1 victory in the $500,000 Acorn on June 11 at Belmont Park.

Matareya flashed her talents around one turn early on, graduating on debut in August at Ellis Park in a 6 1/2-furlong maiden by 4 1/2 lengths. The rest of the year saw her unable to find the winner’s circle again, stretching out to 1 1/16 miles in the Grade 1 Alcibiades at Keeneland and finishing an even fifth behind stablemate Juju’s Map. She closed out the year with a pair of runner-up finishes in the Fern Creek in November at Churchill Downs and a one-mile allowance in December at Oaklawn Park.

“We really liked her last year. We thought she was one of our better fillies,” said Cox. “I thought originally she would maybe stretch [out] just based off pedigree and how she trained, but we kind of see in her races that she wasn’t finishing up quite like we were hoping around two turns. We did ask her to run around two turns in two very good races with the Alciabiades and the allowance race at Oaklawn, which had [Grade 1 Kentucky Oaks winner] Secret Oath in it. So, it was quality fields, but once we cut her back to one turn, she seemed to be a different horse.”

This year has been a turning point for Matareya, who commenced her season with a strong 5 1/4-length win in a second-level allowance in February at Fair Grounds Race Course. She made the grade in her next outing with an 8 1/2-length romp in the Grade 3 Beaumont where she stalked a length off the pace and took command at the stretch call to draw away to her powerful score under Flavien Prat and earn a career-high 94 Beyer Speed Figure.

Each start in 2022 has been a step up from the last for Matareya, who reached Grade 2 success in her third start of the year over stakes winner Pretty Birdie and graded stakes-winner Wicked Halo in the Eight Belles on May 6 at Churchill Downs. The bay filly reached the pinnacle of success in her most recent outing, proving much the best in the Acorn and dazzling with a 6 1/4-length advantage over subsequent stakes winner Divine Huntress over a fast Big Sandy.

“It was huge,” Cox said of the Acorn effort. “Godolphin will add her to their broodmare band and that’s very powerful. It’s big for us and them to have these fillies with big pedigrees to perform in the afternoon at the graded stakes level.”

Flavien Prat, who has piloted Matareya to each of her three graded wins this year, retains the mount from the inside post.

The Rudy Rodriguez-trained Hot Peppers is also enjoying a steadier ascent to the top after showing a great step up in form since joining Rodriguez this spring. The daughter of Khozan is 2-for-2 for her new conditioner, with both wins coming in stakes company, and will look to give Rodriguez a repeat victory in this event after he took last year’s edition with Bella Sofia.

“She’s doing good. She’s doing everything that was asked of her here at Saratoga,” said Rodriguez. “She’s comfortable and eating good, so that’s a plus. The competition will be tough – in a Grade 1 it’s not easy. But she seems like she can make the next step.”

Owned by Michael Dubb and Michael Caruso, Hot Peppers was purchased privately from trainer Ronald Spatz after her second-out graduation at second asking in January at Gulfstream Park. Spatz continued to train the filly through her next three outings, picking up an allowance against fellow Florida-breds and an optional-claiming score against open company before completing her tenure with Spatz with an off-the-board finish in the Sophomore Fillies in March at Tampa Bay Downs for her stakes debut.

The consistent Hot Peppers would not be denied in her next try at the stakes level, coasting to a facile score in the Jersey Girl on June 12 at Belmont in her first outing for Rodriguez.

She made the grade in the Grade 3 Victory Ride on July 2 over Big Sandy, fighting each step of the way to hold onto a slim lead and ultimately prevailing by three-quarters of a length over Half Is Enough in the 6 1/2-furlong sprint for sophomore fillies.

“When I got her and she started working, I always thought she could step up to the plate, and so far, she has not disappointed us,” Rodriguez said. “She’s been doing everything that we ask and we just are happy for [the owners] to let her be in the barn.”

Rodriguez said he has full confidence in jockey Luis Saez to engineer another winning ride aboard Hot Peppers from post 6.

“I’m not going to change tactics. We know she wants to be in control, and she’s been doing that since Day One, so I’m not ready to change it,” Rodriguez said. “If something happens in the race, I’ll let Luis decide what to do. I don’t want to get in her way. We’re going to have a good idea of what we need to do.”

A chestnut daughter of Verrazano, Chi Town Lady won on debut last April sprinting 4 1/2 furlongs on the dirt at Keeneland before trying turf for her next two outings that included her Bolton Landing victory and an even sixth-place finish in the Grade 3 Futurity facing males in October at Belmont Park. She closed out her juvenile season back on the main track with a closing fourth-place effort in the Myrtlewood 19 days later at Keeneland.

Chi Town Lady began this year with a well-beaten seventh behind Matareya in the Grade 3 Beaumont before improving to earn a runner-up finish in an optional claimer on May 19 at Churchill Downs. There, she showed her usual off-the-pace tactics and closed from 11 lengths off the pace to come up 3 1/4 lengths shy of the victorious Parlance.

“We’re going to try and get her to come from way, way back and utilize the style that she’s been telling me that she wants to run,” Ward said. “She always gets away a little slow and last time she sat back there and made one big run. We’re going to try that and hopefully get a placing in a Grade 1 for the owners.”

Mark Anderson’s New York-bred Sterling Silver earned her first graded placing last out when third behind Hot Peppers in the Grade 3 Victory Ride. Trained by Tom Albertrani and bred in the Empire State by Mallory Mort and Karen Mort, Sterling Silver won her first two outings that included a stakes coup again fellow state-breds in the Franklin Square in January at Aqueduct Racetrack. She finished fifth in both the one-mile Busher Invitational at Aqueduct and 1 1/16-mile Grade 1 Ashland at Keeneland before returning to winning ways with a strong 4 1/4-length win in the Bouwerie on May 30 at Belmont.

Albertrani said returning to sprinting has helped the grey daughter of Cupid.

“We stepped her up into some open spots and tried her long. I don’t think she really wants to go too much further than maybe seven-eighths,” said Albertrani. “I think the cutback in distance was good. We’ll be going seven-eighths again this weekend which might give her a little bit more advantage maybe going into the Test.”

The New York-bred November Rein will step up to the graded ranks for the first time after a last-out allowance victory facing open company on July 9 at Belmont Park. Trained by Kelly Breen and owned by breeder Ron Lombardi’s Mr. Amore Stable, November Rein was a stakes winner at Saratoga last summer in the restricted Seeking the Ante and was third in the Bouwerie against fellow state-breds in May.

The daughter of Street Boss will exit post 5 with Irad Ortiz, Jr. aboard.