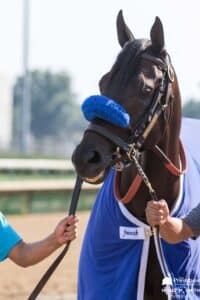 A number of star equines breezed Saturday morning at Belmont Park in preparation for next weekend’s lucrative card that will feature seven graded races worth $2.3 million in purse money.

Godolphin’s Maxfield registered his final breeze for the Woodward on Saturday, covering a half-mile in 48.55 seconds on the main track.

Under mostly sunny skies and temperatures in the low 60s, the five-time graded stakes-winning millionaire completed his half-mile move at 8:45 a.m. marking the quarter-mile in 24.71 and galloping out five furlongs in 1:02.10 and up six furlongs in 1:14.81 under Jose Ortiz, who has piloted Maxfield to five of his seven lifetime victories.

“It was a very good work,” said Maxfield trainer Brendan Walsh. “We just wanted to give him a feel for the track. He did all of his serious work in Saratoga. It was just a routine half-mile. He galloped out really well. We’re all set for the Woodward.”

Maxfield, a dark bay 4-year-old son of Street Sense, enters the Woodward off a runner-up effort to Knicks Go in the Grade 1 Whitney on August 7 at Saratoga. Maxfield arrived at the Whitney from wins in the Alysheba on April 30 and the Stephen Foster on June 26, both Grade 2 events at Churchill Downs.

Maxfield will be targeting his first Grade 1 victory since winning the Breeders’ Futurity in October 2019 at Keeneland.

Hall of Fame trainer Todd Pletcher also worked a slew of horses in pursuit of graded stakes action next weekend. 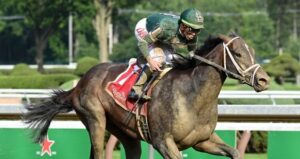 Repole Stable, St. Elias Stable and Gainesway Stable’s Wit, second in the Grade 1 Hopeful last out on September 6 at Saratoga, and Robert and Lawana Low’s decisive maiden winner My Prankster worked in company at 7:45 a.m. over the Belmont training track in preparation for the Champagne.

“It was a good solid work for them both,” said Pletcher, who eyes his seventh Champagne conquest. “They’re pointing for the same race, so I thought it made sense to work them together. They make good workmates, they were head-and-head throughout.

“My Prankster was very impressive in his maiden win,” Pletcher added. “His gate work I thought was impressive before he first ran, he’s not a horse that is an overzealous work horse. If you hadn’t seen that gate work, you might not have expected the debut he had, but he’s a pretty laid back colt. It’s always a big stretch to go from a one start maiden to a Grade 1 stake, but we’ve had some success doing that.”

Pletcher worked three-time Grade 1-winner Malathaat at 9:30 a.m. on the Belmont training track in company with graded stakes-winner and fellow Curlin daughter Spice Is Nice, who completed their four-furlong works in 49.46.

Shadwell Stables’ Malathaat is scheduled to train up to the Grade 1 Breeders’ Cup Distaff and was a last out winner of the Grade 1 Alabama on August 21 at Saratoga. Earlier this year, she won the Grade 1 Ashland at Keeneland en route to a victory in the Grade 1 Kentucky Oaks at Churchill Downs.

Robert and Lawana Low’s Spice Is Nice, a winner of the Grade 3 Allaire DuPont Distaff in May at Pimlico, will target the Grade 2, $250,000 Beldame on October 10.

“Everything has gone according to plan with Malathaat,” Pletcher said. “This was her second half-mile breeze since the Alabama and we’ll go five eighths next week and start to pick things up a bit. There’s quite a bit of time in between races, so hopefully we’ll have her ready.”

Pletcher also worked Spendthrift Farm’s Following Sea, a dual Grade 1-placed sophomore son of Runhappy, who will face elders next out in the Grade 2, $250,000 Vosburgh on October 9 at Belmont – a “Win And You’re In” qualifier for the Grade 1 Breeders’ Cup Sprint.

Following Sea went a half-mile in 49.23 over the Belmont training track. He finished a distant third to Jackie’s Warrior and stable mate Life Is Good last out in the Grade 1 H. Allen Jerkens Memorial on August 28 at Saratoga. In his only start over Big Sandy, Following Sea bested winners going 6 ½ furlongs on June 3.

“He went well,” Pletcher said. “He seemed to run really well in his allowance win here at Belmont, so that’s part of the reason why we chose the Vosburgh.”

Pletcher said Robert and Lawana Low’s Classy Edition emerged from her Joseph A. Gimma triumph on Friday in good order. While the daughter of Classic Empire is likely for the $250,000 Maid of the Mist against fellow New York-breds on October 30, Pletcher did not rule out a start in the Grade 1 Breeders’ Cup Juvenile Fillies.

“She’s been very impressive in both starts, so I think we have to consider open company,” Pletcher said. “The Maid of the Mist comes [one week] before the Breeders’ Cup so we’ll target that race. But if she’s doing so well that we can’t resist, we’ll talk about it.”

Pletcher also stated that Classy Edition could target the Grade 2, $250,000 Demoiselle on December 4 at Aqueduct.

Jack Christopher, a Munnings chestnut who was purchased for $135,000 at the Fasig-Tipton Kentucky Fall Yearling Sale, registered a 92 Beyer for a his 8 3/4-length debut score in a six-furlong maiden special weight on August 28 at Saratoga.

John Gunther and Eurowest Bloodstock Services’ Pipeline, by Speightstown and out of the Empire Maker mare Vivo Per Lei, graduated at fourth asking in a seven-furlong maiden tilt on September 4 at Saratoga. The bay colt’s 3 1/4-length score matched a career-best 97 Beyer.