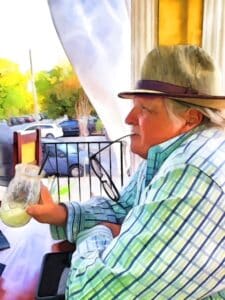 We managed to scratch out 3 winners on the 8-race card to begin the week’s activities at the big oval in Lou Lou.

Had 5 exactas on the day and two of our three “Key Plays of the Day” rambled home in front.

Productive, to some degree.

Nothing to write home about, at the same time.

We are back for more as we head into the weekend.

Here’s a look at our picks, and why, on Friday:

1st: 9-1/4-5-8/7-2/3-6…The ole’ lid-lifter is a MCL event for the 2YO fillies and I will line up with Beverly’s Charge (9) in the first at the big ball yard in Lou. This daughter of Greeley’s Conquest has raced two times already and has spotted the field many lengths at the start. Has come running at the end of both of them, but ran out of ground. Drops into the MCL ranks for the first time here and the barn wins with .35% of those. Nice rate. And, the new rider should help the cause, too. Work on Sept. 19 was spot on. If speed bias doesn’t derail this one, she has a shot at the wire. Vinegar Veggies (1) is the horse to beat and will likely be your PT favorite. This one ran a nice 2nd last time out at Indy Grand. Gets a new rider here and the works are solid. Barn wins with .21% when going into the MCL ranks. I bet the 9-1 across the board and then box those two numbers in the exactas. I will key the 9-1 over/under the 4-5-8-7-2 in two smaller units.

2nd: 7-3/5-4-6/1-2…This is a claimer for the 2YO fillies and will be contested at the sprint distance of 6 furlongs. I saddle up with my first “Longshot Special of the Day” — Restless Eyes (7). This daughter of Midshipman tossed in a very poor outing last time to the gate. Never ran a step. But that was in the first Stakes race of the career and after a ship to Prairie Meadows. Back home here and the works are good. New rider to town can boot one home and this one ran huge in the first two career starts. Drops into the claiming ranks for the first time and the barn wins with .22% of those. Returns as a beaten favorite here, too, and the barn wins with .26% of those kind. I line up for the price play. Ring Me Darling (3) is the ML favorite, according to my good friends over at Brisnet.com. And, why not? First outing at Ellis Park rendered a whopping 41/2-length win on Aug. 8. Came back to try Stakes company at Ky Downs. That experiment was not all bad. Ran 5th. Now, this daughter of Dialed In shows up for $40,000 tag? Hmmm. May be worth the cash. Barn wins with .22% of those cutting back from a route to a sprint and with .25% when dropping into the claiming ranks for the first time, too. Threat. I bet the 7-3 across the board and then box these two in the exactas. I will key the 7-3 over/under the 5-4-6-1-2 in two smaller units.

3rd: 4-8-3/7-2/1-5/6…Jack Van Berg (4) was one helluva man and a great horse trainer, too. His namesake may not be the same HOF caliber as the HOF trainer, but this 5YO gelding fits very nicely here for me. Comes in off a 4th place finish against better at Ellis Park. In 5 starts here? Has 2 wins and a third. Concerning is the fact that this one has only 2 wins in 21 starts over a fast dirt surface. Hmmm. But this trainer is having one great start to the meet, winning 3 of the first 7 outs. Somes Sound (8) has run two really good races in a row and the barn is a perfect 1-for-1 here this meet. Top rider takes the reins again, and he won on this one’s back just two starts ago here. By 4 lengths. Wow. Look out with the speed. Thirsty Betrayal (3)  has hit the board in each of the last three tries and has been coming late in each of those efforts. Has a win and a second in 4 tries here and returns as a beaten favorite. That is important why? The barn has won with .41% of those that come back as a beaten favorite in the last 37 tries. Wow numbers. Wow. I bet the 8-3 — take note — across the board and then box the top numbers in the exactas. I will key the 8-3 over/under the 4-7-2-1-5 in two smaller units.

4th: 5-1/6-3/8/7…Exulting (5) is even-money in the ML, and this one figures to be a tough out in this spot on Friday. Ran in the West Virginia Governor’s Stakes just two starts ago and nearly won a Stakes up at Indy in the race before. Ran up against a tough customer in that one, too. Has hit the board in 7 of the last 9 races. Can toss the last one at KY Downs. Look for a return to glory here, with a very strong speed angle. Rider is just plain good. This one qualifies as my first “Key Play of the Day.” I bet the 5 to win/place/show and then box the 5-1 in the exactas.  I will key the 5-1 over/under the 6-3-8-7 in two smaller units.

5th: 8-6-3/2-5/1-4/7…Blueridge Mountain (8) will get the saddle from trainer Tom Amoss, who has scuffle a bit to find the winner’s circle here this September. In the first 10 starts, has no road map. But? Does have 4 seconds and a third. This 5YO son of Tapizar could fix the drought. Has the ability. I can toss the last one at Indy. Gets the barn’s go-to rider back in the saddle, and this veteran has won a couple of times on this one’s back. Works are good. Look for more here. Heirloom Kitten (6) was claimed last time out when he ran next-to-last and was beaten by a whopping 38 lengths. (How far back do you think the last place horse was that day?) But this barn wins with .21% when racing for the first time after a claim and with an amazing .41% when dropping off the claim purchase. Gets blinkers for the first time here, too. Barn wins with .13% of those. I have to use — .41%? Intrepid Heart (3) is a 5YO son of Tapit and has an impressive 6-1-3 record in 17 career starts. Over this dirt track? Has a win and a second in four starts. Returns here as a beaten favorite and the barn wins with .34% of the last 141 to qualify for that title. Will be coming late, late, late. But will be coming. I be the 8-6 across the board and then box the top 3 in the exactas. I will key the top 3 numbers over/under the 2-5 in two smaller units.

7th: 5-8/2-4/3-7/1…Identity Politics (5) comes from the barn of HOF trainer Steve Asmussen, who will be putting the saddle on this one for the first time. Claimed last time out off a nice win. Gets the meet’s top rider up and the barn wins with .20% in the first start off a claim purchase and with the same .20% when making the 2nd start off a layup. In 10 starts over a fast dirt surface? Has 2 wins and 5 seconds. Hmmm. Super Sol (8) has not been close in the last three outings, but drops from those tougher ranks to the $40,000 claiming title here. Gets the blinkers added and the barn wins with .22% when going from a route distance to a sprint condition. Moves back to the dirt and that’s important. In 13 dirt starts? Has 4 wins and 3 thirds. Take note. I bet the 5-8 across the board and then box those two numbers in the exactas. I will key the 5-8 over/under the 2-4-3-7-1 in two smaller units.

8th: 4-5-8/2-3-6/7…Penny Saver (4) comes into this one off an impressive couple of races. Moved to the turf last time out at Saratoga, where she ran very well despite a slow start that was compromised by a hop. Back on dirt today, where she already has a 2nd. Barn wins with .19% when making this surface switch. Gets a rider who does well for this barn and the winner of the debut race? Came right back to win the next outing, too. Could be finishing strong here. Golden Sights (5) ran a nice one in Stakes company last time out. Was never going to pass the winner that day, but never in doubt who was the 2nd best, either. Drops in class here and the barn wins with .42% when going from two sprints into a route race. Gets the blinkers for the first time here and the barn wins with .21% when adding the equipment. Barn is red hot to start the meet. Take note. Bunduki (8) could add some spice to this odds rack. Has run third twice to begin the career and the barn wins with .18% when routing for the 2nd time. Work here on Sept. 17 was spot on. Threat. I bet the 4-5 across the board and then box the top 3 numbers in the exactas. I will key the 4-5 over/under the 8-2-3-6-7 in two smaller units.

9th: 9-10/6-8-2-1/5-4/7/11-3…You always bet the #9 in the 9th race, right? Well, you probably know the storyline by now. When the numbers add up, you do. They add up for me here. Sir Alfred James (9) comes in off a very nice 2nd to Bango in the Good Lord Stakes at Ellis Park. Race before, this one ran 3rd to Bango here in the Aristides Stakes. Drops all the way into the claiming ranks and has been off since July. Concerns me a bit, must admit. But this one has 3 wins in 6 starts here and is much, much, much the best on paper. Bango, by the way, just ran 3rd as the PT favorite in the first Louisville Thoroughbred Society Stakes. I’m in here, despite the drop. My second “Key Play of the Day.” I bet the 9 to win/place/show and then box the 9-10 in the exactas. I will key the 9 over/under the 10-6-8-2-1-5-4-7 in two smaller units.