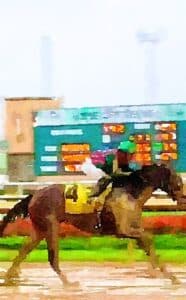 Our two “Key Plays of the Day” tallied a win and a second.

Seems as if we are seeing the ball well right now. Here’s hoping we can keep the steam going today and through the weekend.

Here’s our looks for Thursday, which is supposed to be under cloudy skies and over a muddy track (maybe?):

1st: 4-3-2/1/5-6…Social Circle (4) gets the nod in the ole’ lid-lifter on Thursday at the big oval in Louisville. This 5YO Stay Thirsty mare was claimed last time out when she ran off to a 3-length win. New barn operator win with .26% of those that make the first start off the purchase. Also, the barn wins with .33% of the last 24 trying to repeat in the claiming ranks. This one is 0-for-7 here, but does have 2 wins and a second in 6 starts at this distance. Mixed signals there. Difference could be the track surface. In 6 starts over an “off track,” this one has 2 wins and 2 seconds. Double Dawn (3) could easily be the top pick here, too. This one drops from the $40,000 ranks all the way to the $16,000 level here. Barn is 0-for-1 when dropping this much at one time. but this one has a win and a second in two starts over an “off track.” Same record at this distance. Should be tough at this level. Lea Ro (2) has a win in only previous try over an “off track,” and comes in for the likable George Leonard III. Won just two starts back when this barn claimed this 4YO filly. Ran OK last time out and now gets back to the main track. I bet the 4-3 across the board and then box the top 3 numbers in the exactas. I will key the 4-3 over (only) the 2-1 in two smaller units.

2nd: 3-6-2/4-5/1-7…Landed Gentry (3) will be making the 2nd career start here and the young barn operator wins with .10% of those kind. Gets a top rider in the saddle — again — and could be a tough out here. Mrs. Nushi (6) was claimed for $50,000 last time out and moves up to the protection level now. Barn is 0-for-10 when doing this move up in class. But two good starts in the first three tries. My Friend Amy (2) ran a real good one two starts ago over the turf at KY Downs. In 6 career starts to date, has 2 seconds and 3 thirds. Close. Cigar this time? I bet the 3-2 across the board and then box the top 3 in the exactas. I will key the top 3 numbers over/under the 4-5 in two smaller units.

4th: 3-1-2/5-6/7-4/8…Oscarette (3) is another ML favorite who should do well today. This 3YO daughter of Firing Line is owned in part by the man who rode this one to a near-upset victory over American Pharaoh in the KY Derby. Ran well on debut at KEE in October and has trained well for this return to action. Look out here. New Rider is having a great year. Great. Year. April in Paris (1) has run two 2nds in a row and should be geared up and ready to roll. Has not raced since Jan. 2, though. Barn wins with .13% of those away from the gate this long. Gets a top rider up and this one has faced some good ones in the past. Ready? Salute the Flag (2) has been working very well for this debut run, and the barn wins with .08% on the first ask. Dam has 2 winners from 2 starters — with a Stakes winner. Could pop at a price. First “Longshot Special of the Day.” What will we do? I bet the 3-2 across the board and then box the top 3 numbers in the exactas. I will key the top 3 numbers over (only) the 5-6 in two smaller units.

6th: 4-2-5/6-1/3…American Tattoo (4) goes for a red-hot young trainer, who is not getting much sleep these days with a new foal on the ground at home. This meet, the barn has gone 7-4-1 in just 24 starts. Rounds up to a nearly .30% rate. this one drops off the last race and does have 2 wins in 4 starts at this distance. But? 0-for-5 here. Little Menace (2) drops into the claiming ranks after running a real good one against tougher here back in May and on the sod. Will be the first time in the claiming ranks and the barn wins with .24% when that happens. Look out. Gigging (5) has run three good ones in a row and has a 2-1-4 record in 11 starts here. Just two starts ago, this deep closer nearly got up against tougher. Will need some racing room late, but has a rider that can pick a good path. I bet the 4-2 across the board and then box the top 3 in the exactas. I will key the top 3 numbers over/under the 6-1 in two smaller units.

7th: 4-7/5-8/6-2…Bagboss (4) is odds-on favorite going into this one. The 3YO son of Speightstown will be making the first start since May 1, though. Has run 2 2nds to start the career, and this one has the look of a real good one. Works are solid and spot on for the return. Gets the world’s best rider these days, up in the saddle. Look out. Gus Piazza (7) is a first time starter for Tom Amoss, who had a zoom machine gun off last week on debut. This one looks super talented in the a.m. and may be just the right price here, too. I have to use. I bet the 4-7 across the board and then box these two in the exactas. I will key the 4-7 over/under the numbers listed in two smaller units.

8th: 1-4/2-5/3-6-7-8…Frost Point (1) has been off for much of the year, but will be making the 3rd start off the layup. Barn wins with .13% of those, but this one nearly won last time out when going a mile at KEE. Top notch rider moves on, but Joel Rosario gets the nod. Winner of the last one came right back to win the next out, too. This 3YO daughter of Frosted looks like she could develop into a real good one. Take note. Misty Veil (4) is another top runner from the Amoss barn, who could play spoiler maker again here. This one has super speed and has run three 2nds in a row. Has hit the board in each of the last 5. Faced some good ones in those frays, as well. Don’t forget this one. I bet the 1-4 across the board and then box these two in the exactas. I will key the 1-4 over — only — the 2-5-3-6 in a smaller unit.

9th: 5-3-8/10/1-7-11-9/12-2…The finale is a $50,000 MCL event for the 2YOs, and I will saddle up with Pinch Hitter (5), one of two from the Brad Cox barn in this battle. This 2YO son of Street Sense nearly won at this same level last time out at KEE. Came with a late rush, only to run out of room at the wire. Should be a tough out with a little better break. Doctor Nash (3) is the “other” Cox entry. This son of Practical Joke drops from the $150,000 level to this mark. Ran 3rd as the favorite last time out and the barn wins with .31% when dropping this much at one time. Goes out to a route distance for the first time, too, and the barn wins with .28% of those. Legit factor. Requisition (8) goes for the HOF trainer Steve Asmussen, and this deep closer made some ground up last time out. Needs to find a quicker turn of foot, but should be running at the end. Barn wins with .21% in the MCL ranks. I bet the 5-3 across the board and then box the top 3 in the exactas. I will key the top 3 numbers over/under the 10 in two smaller units.