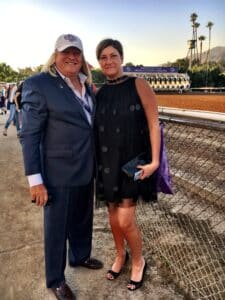 We kick-started the Turfway Park “Holiday Meet” with a few presents under the tree. Out of the 8 races carded on Thursday night, we booted home 4 winners. Not bad. Not bad, at all.

We came up a little short in the Exactas Department, though. Sad to say. After hitting the first two, for a nice return of $22.60 and $32.80 for each $1 played, we were blanked the rest of the way. Sad to say.

Our one “Longshot Special of the Day” ran a gallant third in the finale of the night. That mare returned $13.40 for the “Show” and was nearly a big payday. Let’s hope we continue that trend at the home of Tapeta.

Here’s a look at Friday’s card:

1st: 2-11-1/4-8-9/(13)-12/5-3-7…Blarney Girl (2) gets the nod in the ole’ lid-lifter up at the “Ya’ll” track in Florence, ya’ll. This 3YO daughter of Exaggerator returns as a beaten favorite and the barn wins with .16% of those kind. Also, this one drops considerably off the near-miss 2nd last time out. Should like this company a bit better and the trainer wins with .20% in the claiming ranks. Worth a try here. Anna’s Moonlight (11) will break from the outside and that is never a great thing. This one has been off since mid-October, when she was 3rd up at Indy Grand at this same level. Has done well over the turf in the past and sometimes that translates to a good AW runner, as well. Gets a red-hot rider, who dominated opening night. Threat. Kick Out the Jams (1) has not been out since July and now appears here for a lot less money and with a new barn operator. Don’t know anything about this trainer, other than she has won with .09% of the 76 starters this year. If this one is anything close to the filly she used to be? Fits. If not? She doesn’t. I bet the 2 across the board and then box the top 3 numbers in the exactas. I will key the top 3 numbers over/under the 4-8-9 in two smaller units.

4th: 10-6/3-4-2/9-1/8/7-5…Amalfi Princess (10) is a 3YO filly from the barn of Mike Maker, who normally does quite well in these parts. Barn has won with .17% of 1,245 starters this year, and this one finds a little softer spot after toiling on the sod the last three times at KEE, KY Downs and Saratoga. Has never been on the AW, but should fit nicely here. Big threat. Natalies Charm (6) is my first “Longshot Special of the Night.” This 3YO daughter of Noble Mission is conditioned by one of the best people in the game. Then and now. Comes in off two wins and a third in the last 3 outs. Moves up. But this man knows where to spot them. I bet the 10-6 across the board and then box these two in the exactas. Sternly. Stern. Ly. And, then I key the 10-6 over/under the 3-4-2-9-1 in two smaller units.

5th: 1-7-12/9-11-(13)/3-4-(14)/5-6…Bonkers (1) is a name that I simply cannot ignore. Lots of people have used this term to describe your’s truly, as well. In addition, this 4YO daughter of Bernardini comes from a Stakes-winning mare and is just a win away from becoming a nice addition to someone’s broodmare band, as well. That may come here. Has run very well over the AW at Presque Isle, just two starts ago. Blinkers go back on. And, goes from a sprint to a route. This trainer does well with all those angles. Look for this one to flash early speed in this route. Like. A lot. Angel Carina (7) is my next “Longshot Special of the Night.” This 3YO daughter of Uncle Mo will be making the career debut in this spot. Home-bred for Three Chimneys has been working well. Don’t know how she will handle the AW or the gate for the first time. But the pedigree gives this one a shot, too. Skybox (12) has been competitive in the last three outings — all on the turf. This barn is 0-for-4 going from sod to AW, but this one looks like she could do it. By Quality Road and out of a Stakes-winning Giant’s Causeway mare. Pedigree galore. Chance. I bet the 1 across the board and then box the top 3 in the exactas. I will key the top 3 numbers over/under the 9-11 in two smaller units.

6th: 4-2-8/1-7/5-3/6…Next (4) is a very nice 3YO son of Not This Time, who flashed a ton of ability as a 2YO in 2020. Actually, this one ran in the G1 Breeders’ Cup Juvenile against the likes of Essential Quality. Didn’t fare real well there and has not been the same since. But the race two ago, in the G2 Hall of Fame at Saratoga, was encouraging. No Graded Stakes horses in here. This could be the spot. Runs for the first time as a gelding and with Lasix. Good be a good combo. I’m in. Big Dreaming (2) ran a very nice race last time out at KEE. Just missed. Gets a red-hot rider in the irons and the barn wins with .14% when switching from turf to the AW. Could do well at this shorter distance, too. Hush of a Storm (8) won twice over this track earlier this year and looked to be spotted very well for a run at this year’s KY Derby. Faltered in the G2 Blue Grass and then took a vacation to October. First try back — in a grass Stakes at KEE — showed some real promise. Barn wins with .29% in the 2nd try with Lasix. Also, this one will run for the first time as a gelding, too. Must use for me. I bet the 4-8 — take note — across the board and then box the top 3 in the exactas. I will key the top 3 numbers over/under the 1-7 in two smaller units.

7th: 3-10-7/8-5/6-2/4-1…High Spirits (3) was claimed last time out and now will run for the first time with a barn that wins .23% on the initial attempt after the purchase. Deep, deep closer should do well over this AW surface, and this one has a 3-0-1 mark in 7 previous tries over an AW track. I can toss the last one on the slop. Toss. Look out here at a square price. Subdued (10) ran over the slop at Churchill Downs last time out and that was a debacle. If you can toss that one, look at the four races before. All in the money. All competitive. No wins, but in the hunt. Could be a factor here. Fire Marshall Bill (7) was claimed two back and now drops back to a lower price point in this one. Should enjoy the class relief and could find his old run, too. I bet the 3 to win/place/show and then box the top 3 in the exactas. I will key the top 3 numbers over/under the 8-5 in two smaller units.

8th: 5-10-7/4-12-(14)-2/8-9…Paulas Game (5) is my last “Longshot Special of the Night.” This one is listed at 6-1 in the ML, and on the cusp of being a “longshot.” But this one drops to half the asking price of the last race and picks up a red-hot rider at the same time. Broke the maiden at Ellis Park and could fit this spot nicely. Guilder (10) is the speedster in this group and will have to be caught and passed to be beaten. Come catch me if you can. In two previous tries here, she won once. Asia Asia (7) won her last time out in the slop at Indy Grand. Dominated that field. Barn wins with .21% when moving up to face winners for the first time. Barn has won with .30% of 33 starters this year. I can’t ignore and should be a solid price at the odds box, too. I bet the 5-7 across the board — take note — and then box the top 3 numbers in the exactas. I will key the top 3 numbers over/under the 4-12-2 in two smaller units.