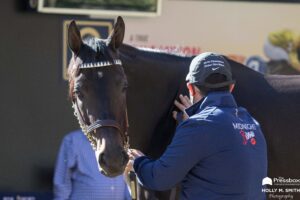 Keeneland has announced that champion and $7.4 million earner Midnight Bisou, a 7-year-old daughter of Midnight Lute who is in foal to Tapit, has been supplemented to Book 1 of the 79th November Breeding Stock Sale on Nov. 7. Midnight Bisou is consigned by Hill ‘n’ Dale at Xalapa.

Midnight Bisou won the $1 million Cotillion (G1) and Santa Anita Oaks (G1) in addition to three other graded stakes at 3. She was named the champion older dirt female at 4 in 2019 following a dominating campaign that produced seven wins in eight races. Among her seven graded stakes wins that year were victories in the Personal Ensign (G1) at Saratoga, Ogden Phipps (G1) at Belmont and Apple Blossom Handicap (G1) at Oaklawn.

Midnight Bisou returned in early 2020 to finish second in the $20 million Saudi Cup against males and win the Fleur de Lis (G2) at Churchill Downs.

Winner of 13 races – all stakes – in 22 starts over four seasons, Midnight Bisou earned $7,451,520 during her illustrious racing career.

“It’s impossible to describe what she’s meant to me, my family and my partners,” Jeff Bloom of co-owner Bloom Racing Stable said. “She took us on an incredible journey and created so many amazing experiences for us across the globe. All those memories I will treasure the rest of my life.

“She effortlessly transitioned to life as a broodmare with the same elegance, class and intelligence that she displayed as a racehorse.”

“Midnight Bisou represents the very best of Thoroughbred racing,” Keeneland Vice President of Sales Tony Lacy said. “She is a world-class racehorse from an active, talented family who is in foal to one of the industry’s premier stallions. Keeneland is delighted to offer her during Book 1 of our November Breeding Stock Sale.”

Diva Delight, who is in foal to Gun Runner, also is cataloged to Book 1. Out of the winning Tour d’Or mare Tour Hostess, she is consigned by Hunter Valley Farm, agent.

Book 1 starts Nov. 7 at 1 p.m. ET. Keeneland will accept supplements to Book 1 until the auction begins.