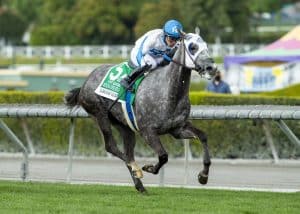 Trained by Phil D’Amato, Leggs Galore will shorten up off a half length win in the Grade II Buena Vista Stakes at one mile on turf March 5.  A scintillating 2 ¼ length winner of her only start down the unique hillside course two starts back in the Sunshine Millions Filly & Mare Turf Sprint Jan. 15, Leggs Galore will again be ridden by regular rider Ricky Gonzalez, who has been aboard for all but one of her eight career victories.

A 5-year-old California-bred mare by 2014 Breeders’ Cup Classic winner Bayern out of the Indian Charlie mare Cashing Tickets, Leggs Galore, who will be making her third start of the year, is 13-8-1-0 overall with earnings of $560,208.

A two-time stakes winner, Holly and David Wilson’s Hear My Prayer returns to Santa Anita following a disappointing 11th place finish in an ungraded 5 ½ furlong turf stakes at Keeneland April 16 and will hope to run back to her solid third place finish coming down the hill three starts back in the Grade III Las Cienegas Stakes on Jan. 9, her only try over the course.

With leading man Juan Hernandez back aboard, look for Hear My Prayer to stalk Leggs Galore to the dirt crossing as her connections hope she’ll tire a bit late.  Trained by Vladimir Cerin, Hear My Prayer is a 5-year-old Florida-bred mare by The Big Beast out of the Songandaprayer mare Additional Prayer, is 14-5-0-4 overall with earnings of $233,350.

Although fourth, beaten 3 ¾ lengths in the Grade II Monrovia Stakes down the hill on April 9, Marsh Naify’s Royal Address was an impressive neck winner over the course in a second condition allowance March 13 and was second beaten a neck at the same conditions three starts back on Jan. 28.

Trained by Neil Drysdale, Irish-bred Royal Address will be making her fourth consecutive start down the hillside and be reunited with Joe Bravo, who rode her so effectively two and three starts back.

With Leggs Galore and Hear My Prayer carving out what could be a hot pace, Royal Address looms a bona fide late threat as she seeks her first North American Stakes win in what will be her eighth start for Drysdale.

THE $75,000 MIZDIRECTION STAKES WITH JOCKEYS & WEIGHTS IN POST POSITION ORDER

Admission gates will open early for betting on a Preakness Day undercard from Pimlico Racecourse at 7:15 a.m. Saturday.  First live race post time for a 10-race card at Santa Anita is at 1 p.m.