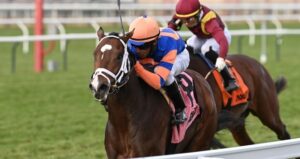 Trained by Hall of Famer Todd Pletcher, Never Surprised has never been worse than second and arrives at the Hill Prince off a runner-up effort in the 1 1/16-mile Grade 3 Saranac on September 4 at Saratoga Race Course.

The bay son of third-crop sire Constitution set the pace in the Saranac, finishing second beaten a length to returning rival Public Sector. The effort was his first start off an eight-month layoff, where he was second in his 2021 bow in the Grade 3 Kitten’s Joy on January 30 at Gulfstream Park.

During his juvenile season, Never Surprised was a 3 ½-length winner on debut going six furlongs over the Aqueduct outer turf en route to a score in the 1 1/16-mile Central Park over good Big A turf.

“He’s a natural speed horse and he’s aggressive,” Pletcher said. “The key to success would be for him to be able to settle and relax enough to get the mile and an eighth.”

Never Surprised has trained forwardly over the Oklahoma training turf at Saratoga posting three bullet works, the most recent being a half-mile move in 47.55 seconds on October 15.

“I thought he ran really well off the layoff. It was a strong race and he put in a good effort,” Pletcher said. “I think he’ll be able to move forward second time off the layoff. He’s been working really well since then. He doesn’t seem to mind any kind of ground. The main thing is being able to settle a little bit.”

Pletcher previously teamed up with Repole to capture the 2013 Hill Prince with Notacatbutallama.

Kendrick Carmouche, aboard for both victories last year, will be reunited with Never Surprised from post 10.

One of three entrants for trainer Chad Brown, the bay son of Kingman captured the Saranac off a ground-saving trip down the backstretch before making a sweeping three-wide move in upper stretch to win by one length.

Four weeks earlier in the Grade 2 Hall of Fame on August 6 at Saratoga, Public Sector received a similar winning trip when a more distant fourth toward the inside, but maintained his hedge-riding position down the stretch to garner a one-length victory.

The blue-blooded Dubawi bay colt put together two game off-the-pace triumphs at the Spa this summer. Prior to his last out coup, Sifting Sands lit up the tote board at 28-1 odds in an allowance optional claimer on July 14.

The Hill Prince will be the first start at nine furlongs for both Public Sector and Sifting Sands.

“They’re both coming into the race the right way,” said Brown assistant Dan Stupp. “Distance wise, at this point in their campaign, I don’t see a mile and an eighth being any issue for them. They’re both rock solid horses.”

Sifting Sands kicked off his career with a distant sixth as the favorite in a Saratoga turf maiden special weight last September. He found the win column next out in his sophomore debut on March 13 at Tampa Bay Downs.

“He’s a horse they liked at two. He’s just a late-developing 3-year-old turf colt that I think will continue to get better the more we do with him,” Stupp said. “By every indication in the morning, I expect a good effort.”

A $645,273 purchase from the 2019 Tattersalls October Sale, Sifting Sands is a half-brother to three-time winning Group 1-winning millionaire Legatissamo. Both are out of the Montjeu mare Yummy Mummy – a half-sister to 2010 Irish Derby winner Fame and Glory.

Leaving from post 8, Sifting Sands will be ridden by Manny Franco, who has engineered winning trips in his last two starts.

“Manny obviously gets along with him very well. They have confidence in each other,” Stupp said.

Rounding out Brown’s contingent is Founder, who found stakes success two starts back in the Tale of the Cat traveling 1 1/16-miles over firm turf on July 31 at Monmouth Park.

Owned by Jeff Drown and Don Rachel, the son of second-crop sire Upstart made his first four starts on dirt, graduating at first asking over subsequent graded stakes-winning stablemate Highly Motivated last summer at the Spa. He enters off a fifth in the Saranac.

Trainer Christophe Clement will saddle Solider Rising, who will see a considerable cutback in ground following a second-place finish in the 12-furlong Jockey Club Derby Invitational.

Never worse than second in a half-dozen lifetime starts, Solider Rising was initially campaigned in France by Andre Fabre and made his debut for Clement when a rallying second in the Grade 1 Saratoga Derby Invitational on August 7.

Soldier Rising, a bay son of Frankel, boasts the highest bankroll in the field with $419,481 in lifetime earnings. He is owned by Michael Dubb, Madaket Stables, Morris Bailey, Wonder Stables and Michael J. Caruso.

A victory would put Clement on even terms with Hall of Famer Bill Mott for most Hill Prince scores, following past success with champion Gio Ponti [2008], Summer Front [2012], and Have At It [2018].

Joel Rosario will pick up the mount from post 11.

The Hill Prince honors Christopher Chenery’s 1950 Horse of the Year, who captured that year’s Preakness Stakes, Jockey Club Gold Cup, Wood Memorial and American Derby. Hill Prince finished behind Middleground in that year’s Kentucky Derby and Belmont Stakes. A three-time stakes winner at two, Hill Prince was named Champion 2-Year-Old in 1949 and Champion Older Horse in 1951. He was inducted into the National Museum of Racing Hall of Fame in 1991.